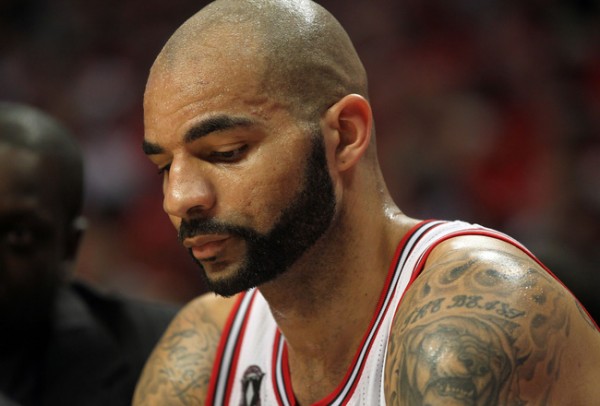 Let’s take a look at the obvious: Carlos Boozer has not looked like Carlos Boozer since coming to the Bulls. One reason is that he has had to guard some pretty talented power forwards in the East. The real problem Boozer is facing is that fans and teammates don’t really know from night-to-night what they are going to get from him.

I think the solution is simple. He is not the same without a pass-first point guard. I know the floodgates are opening about Derrick Rose being an elite point guard, but the fact still remains he is a shoot-first, pass-second guy. When you are a big man, you are used to being fed, and getting one or two touches a quarter are just not enough.

When Boozer was playing with Deron Williams, he was getting 10 – 15 touches per quarter. That means more shots and more opportunities to get loose. When you are a big man, you aren’t going to fight that hard for position if you aren’t sure you might get the ball, so you become a jump shooter when you get it more often than not.

Boozer has often been questioned, effort-wise, but when I watch the games, I see him running hard and getting back on defense. The only thing I don’t see is good ball movement. It appears most times that when Rose is dribbling, I see a screen, a roll, and a perimeter scorer coming off the bottom curl. There hasn’t been many screen and roll situations with Boozer either. Interestingly enough, he has made a living as a pick and roll player in the past.

All the blame doesn’t go to the Bulls not running sets for Carlos. He has to face the pain himself.

Rose is a special talent, and he has to command a double team, simply because there are not many players can guard him straight up. I even give him the edge on Dwyane Wade, because he is younger and slightly more versatile. Defensively, though, he saves a lot of energy as he rarely guards the better offensive players, so he gets the offensive edge in that situation as well.

What I do know is that Boozer better pick it up, or Mr. Taj Gibson will absorb all of his minutes. However, if the Bulls give the man his touches, I am sure he can make a difference.

9 Replies to “The Real Reason Carlos Boozer Is Struggling”