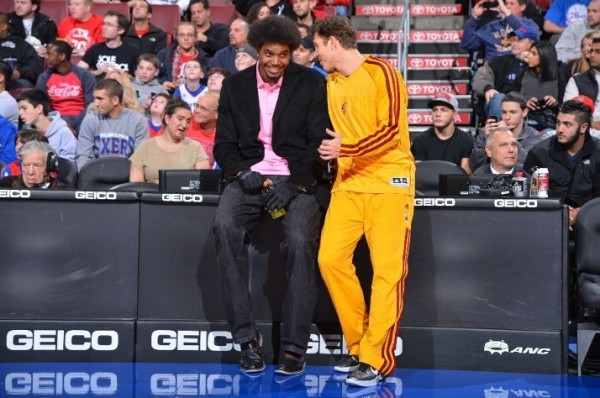 "Bottom line is Andrew is out indefinitely," DiLeo said (per ESPN). "There are no timelines; we just have to wait and see how he reacts."

Whether you think the Sixers ultimately came out on the winning or losing end of this trade is negligible. The bottom line is, the Lakers were going to get Dwight Howard, and Bynum had to go somewhere. The 76ers were basically stuck in NBA purgatory and needed to do something a bit drastic to fight their way out.

In any event, Andrew Bynum has seemingly made the news almost every week for something not related to basketball. I figured it’d be fun to try and guess what else Andrew likes to do when he’s not either hurting himself bowling, practicing his free throws at the nearest Dave and Buster's or looking like the fifth member of The Beatles.

What’s interesting about Bynum is that he’s 25 years old and this is already his eighth year in the league. And we’ve been asking the same questions about Bynum’s ability to impact a team as well as his maturity level “when he’s healthy.” Given Bynum’s injury history, we really haven’t had an answer to that question. Last season, Bynum had the most productive year of his NBA career, around 19 points and 12 rebounds a game.

That production output has lent much credence to the notion that “a healthy Bynum” would actually be a force to be reckoned with. And given the lack of actual NBA centers with the skill set Bynum has, I can certainly understand why everybody is excited about his potential.

That’s just the thing though. Bynum has been in the league for almost eight years and we’re still talking about his “potential.” Bynum hasn’t been healthy in seven of the eight years he’s been in the league. Outside of his second season, Bynum has only played more than 65 games in a regular season once in his career and has a career average of 11.7 points and 7.8 rebounds per game.

I’m not an expert on basketball, but 12/8 from a guy with documented maturity issues who may or may not be on his “last legs” of health in the NBA doesn’t really seem like someone to make a lot of fuss about. Granted, his injury history says he has relatively low mileage for a big man, but big men’s knees tend to go a lot quicker than most other positions (no shot to Greg Oden).

I understand why the Sixers made the move they made for Bynum. Again, they had to do something. If you take a look at the Atlantic Division right now, the Boston Celtics are basically at the bottom of the division. These same Boston Celtics who’ve won every single division title going back to when the original “Big 3” formed are at the bottom of the division.

The Knicks are playing out of their mind, the Nets look legit, Boston will (hopefully) right the ship, and then you can’t ignore the fact the Miami Heat run the entire conference. In order to compete, you have to be able to make the appropriate moves that give your team a chance to win, and Philly did that.

I’m just not sure why everybody seems to believe Bynum will be the one to help them do so.

3 Replies to “The Passing Potential Of Andrew Bynum”