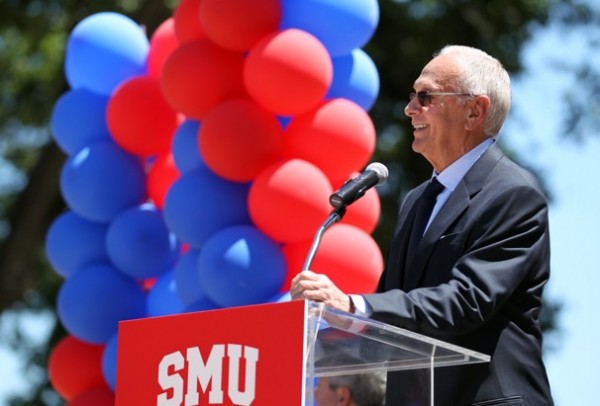 To take a line from Johnny Cash, Larry Brown has been everywhere, man.

His most recent stop was announced officially Monday, and it's Southern Methodist University. The 71-year-old coach will guide the Mustangs in his final stop (maybe, probably; ah, who knows).

Plenty of sly jokes have been (and will continue to be) made about Brown never knowing when to call it quits. The man won a title in the NBA and NCAA. He's bounced around more than, well, a basketball.

The jokes are all deserved, and most are in good taste.

Brown started playing college ball at UNC in 1959. That's when Dean Smith was an assistant there. Hell, the three-point line wasn't introduced to the NCAA until 21 years later. The man was drafted by the Baltimore Bullets of the ABA.

You get it, he's old. He's a lifer. Basketball pumps through the Brooklyn native's veins.

So while it's all well and good that his latest endeavor seems to be a bit, shall we say overzealous, it's still great to see the man back on the bench.

There's an adage that goes something along the lines of, 'find something you love and never work a day in your life.' Everyone's heard it once or twice or a billion times in the grind of finding employment, and furthermore, happiness.

Brown finds his happiness on the court. And despite being an old timer, he still has the hunger to come back and coach some more.

Isn't there an intrinsic beauty  in all of that? How many people out there could find something they love to do, love to be around, and do it for 50-plus years?

Not everyone is afforded the opportunity to do what they love to do. Some people are afraid to pursue their dreams of what is truly for them. There are a million reasons why people end up doing something other than what they may have thought they were truly made to do. None of them are really bad reasons; just reasons all the same.

To find what makes you happy and do it everyday may be the truest peace of mind that exists in this great big universe.

To his credit, Brown knows that. Brown would rather grow closer to the end of his life on a sideline in a suit than on a golf course in a Hawaiian shirt.

Good for him, and good for SMU.

The obvious cynical angle is that Brown is doing this for his ego, not SMU. But, doesn't he deserve that much? A man with the success that he's had and the hours he's put in should be able to go out as he sees fit.

Also, it's not as if Brown is walking into a high-profile luxury job. He's at SMU, where basketball doesn't exist to the outside world because it's never been brought to anyone's attention.

He'll either fall on his face or make a dent in the future of SMU's program. Either way, it is what is. SMU couldn't find a better coach than Brown on their best day, while Brown could certainly finagle a job somewhere better on his worst.

None of that matters now, as he's found a spot to stay presumably until his coaching clock hits triple zeroes.

Why is he doing it? He alluded to why in front of a group of SMU supporters and reporters at his introductory press conference.

Shouldn't we all be so lucky?

4 Replies to “The Nomad's Next Stop: Larry Brown Touches Down At SMU”