Sometimes, when success comes quickly for people, there’s a tendency to marginalize failure. There are some who view failure of any kind as almost a one-off kind of thing and the learning experience that can be found in futility often goes overlooked. When you hear the term “spoiled by success,” this is a good example.

But for those who internalize failure, for those who allow setbacks to eat at them and consume them, those are the individuals who often achieve success beyond the wildest of imaginations.

Derrick Rose is part of the latter group.

For as much as he is consumed by wins, the losses, especially like the one to Miami on Sunday, eat away at him like cancer. And as leader of the Chicago Bulls, what eats at Pooh eats at the rest of the team.

What happened on Sunday was, no doubt, Derrick Rose’s fault, and he'd be the first to admit it. He missed two key free throws in the clutch that could’ve given Chicago the lead. It was those misses that overshadowed the offensive brilliance he displayed in single-handedly erasing the Bulls deficit and getting Chicago back in the game.

So for those who viewed the outcome as some sort of justification to say that Miami is a better team than the Bulls, well, they might want to rethink that one. 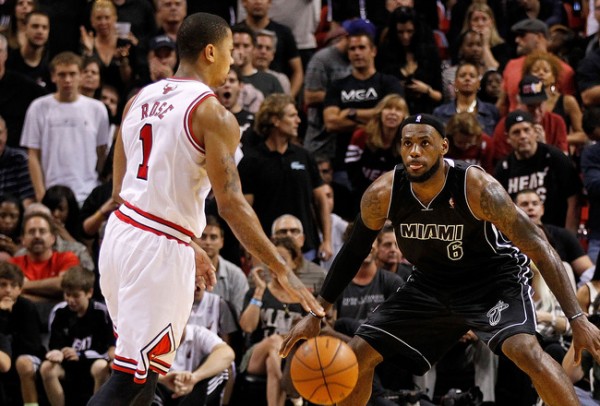 The Heat may have won the game, but they are not a better team. What transpired on Sunday proved as much.

At full strength, the Heat barely edged a Bulls team with their second best player sidelined (Luol Deng), virtually no meaningful production from their third option (Carlos Boozer) and a SG (Rip Hamilton) who played through a thigh and groin injury. Also, their backup PG (CJ Watson) was out and Rose played the bulk of the minutes (almost 45) in the game after John Lucas III was benched when LeBron James hurdled him for a ridiculous first quarter dunk.

Derrick Rose also did most of the scoring, as no Bulls player registered more than 11 points. All of this and the Bulls still only lost by four points, 97-93.

That's a huge cause for concern, especially if you're the Miami Heat who've already endured a three-game losing streak this season with losses to two sub .500 teams (Golden State and Milwaukee) and close wins against four other squads with losing records.

Unacceptable when you consider their roster.

Fans in Chicago were obviously disappointed by the loss, but given the circumstances, Sunday's game did nothing but build confidence in the Bulls ability to get past Miami. It also helps when you know that nobody took the loss harder than Derrick Rose.

He knows they should've won that game and the pain from the way the Bulls took the L probably kept him up all night, too. That's bad news for Miami and their legions upon legions of overconfident and cocky Stans...

They better not sleep, either.