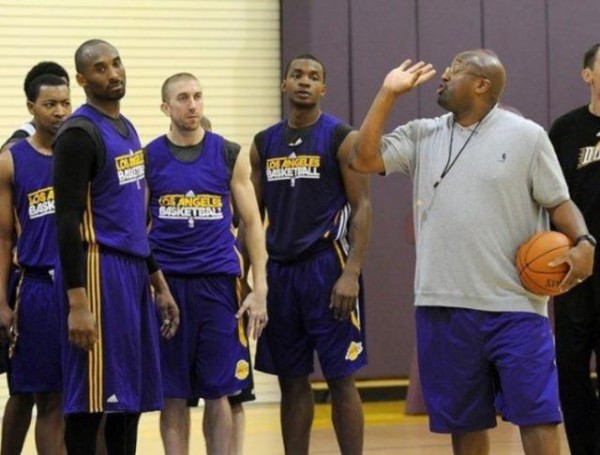 I’m not sure if anyone’s ever seen this TV ad for The Mob Doctor. At the 22-second mark, the main character gets handed a note that says “KILL HIM.” This is kind of how I imagine things ended for Mike Brown this week: Kobe handing a note to Jim Buss with the words “FIRE HIM” on it.

It’s been a wonderful two weeks for Smush Parker and Stan Van Gundy, whom I imagine have been doing shots of Diet Pepsi with each other nightly, watching Kobe be a hero to no particular meaningful storyline, and Dwight Howard not getting the start he was looking for with his new team.

The Lakers will regroup, because they always do. And they will get a head coach that the public will applaud and the team will be willing to get behind, because they know perception is important with this hire. Ironically, Van Gundy (Stan, not Jeff) feels like the best fit for this team, so it’s kind of hilarious to think that Dwight Howard is the one preventing this from happening.

But the scariest thought as a Lakers fan is this: With the Mike Brown distraction removed from the equation, if the team doesn’t get itself together over the next month, then where do the stories go? It’ll fall on the players, it’ll be a matter of fit, and it’ll be questions of whether this entire experiment of the Big Four warranted all the hype.

For reasons that I have no concrete evidence to back up, I think the Lakers will be just fine. It’s what they always do.