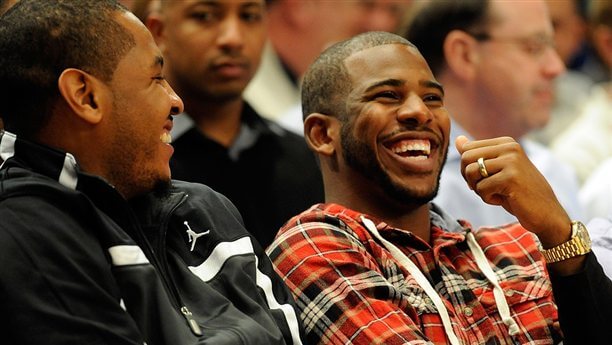 When Carmelo Anthony and Chris Paul made the announcement that they would join Amar'e "STAT" Stoudemire on the New York Knicks squad at Carmelo’s wedding, I was happier than a kid with a bag full of Halloween candy. Albeit fiction at the time, just the thought of it had me salivating, as a Knicks fan. Well, we found a way to get Carmelo traded and signed, but we haven’t been as fortunate in our pursuit of CP3. It didn’t even seem likely that it would happen any time soon, as talks were never stirred up between the New Orleans Hornets and the New York Knicks.

Word is now circulating throughout the blogosphere that Paul has instructed his agent and the Hornets to get a deal done sending him to New York. No one is happier than I am that Chris Paul wants to be a part of the Knicks family. As a lifelong Knicks fan, I am excited about the possibility of this happening. The only real problem with getting this deal done is that we really don’t have anything to give the Hornets in return. We mortgaged our team to get the Carmelo deal done, and there isn’t really anything left to offer but picks and expiring contracts.

Now that two-thirds of the deal is done, I have to wonder if the third leg of the deal will ever get to be finalized. I suspect owners are going to try to make it harder for players to leave one team and handcuff them in the trade process, especially after what happened with Carmelo and Lebron last season. That leaves Chris Paul in limbo. If you really think about it though, he is in the last year of his contract and the Hornets don’t want to lose him for nothing at all, so a deal may just get done. No other team will trade for Paul if they know he is not going to sign an extension to stay more than the remainder of this season so, in that aspect, the Knicks may have a little leverage.

The new CBA makes this deal even tougher for the Knicks to pull off. The only way Paul can be adequately compensated is through an extend-and-trade deal. The extend-and-trades in the new CBA are also not as appealing, because it calls for only a three-year extension, not a four-year extension. Paul can sign for four years in the summer and, if the Hornets and Knicks can work out a sign-and-trade in July, five years.

The Knicks’ greatest fear is if Paul gets traded before free agency to a club he may have interest in, such as the Lakers, who reportedly may make an offer for Paul even if he doesn't sign an extension.

All I can do now is just sit and wait. I will enjoy Melo and STAT but I will be awaiting the arrival of my homie, Chris Paul, to my long-loved Knicks. It's been a long time since we have had more than one person to cheer for on our roster. Now we have two guys who can go for 30 plus on any given night. If we get the third piece of the puzzle, the game changes drastically. If this works out like I think it can, there will be no one on this earth happier than myself. Well, maybe STAT and Melo, because their life will get easier.