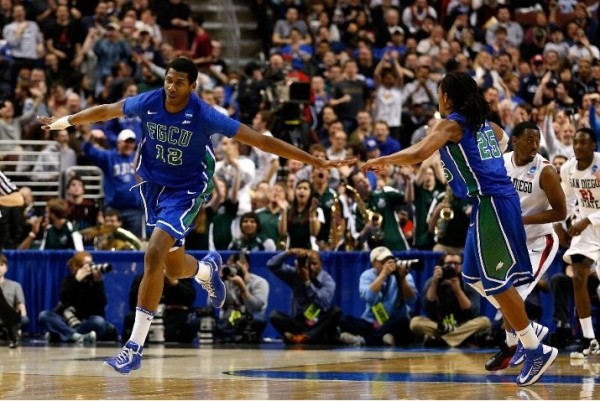 The Florida Gulf Coast Eagles don't seem to fit the mold of the plucky underdog we've all grown to love when March rolls around. There's a difference between this team and teams of the past - besides being the first 15-seed to reach the Sweet 16. FGCU looks the part with no luck and last gasp miracles required to advance. If anything, this group of royal and green are the perfect portrait of the game's parity.

Quite simply, they are as good as they look. David is an improper historical figure for comparison. His weapon was a slingshot. The Eagles are equipped with much more than that.

Despite Georgetown's lofty rank,  there's always reason to think less of them when the tournament rolls around. The Hoyas are built for the Big East and their prodding style of play seems an easy target for the underdog. If a team can score 60 points against Georgetown, they can win.

In San Diego State, FGCU found an opponent that finished fourth in the Mountain West Conference. As an easy winner over Oklahoma - and if you watched that first-round game, you wondered why the Sooners even danced - the Aztecs were the type of opponent that would allow for an opportunity to advance.

FGCU did that too.

This isn't an excuse as to why the new love of the basketball nation is in the final 16. It comes down to matchups for any team, and the Eagles took advantage of theirs. What's more impressive is they did it with a 'wow' factor the likes of which we've rarely seen. They beat the Hoyas and Aztecs with ease. They threw alley-oops all over the court. Suddenly, they looked less like an underdog than a favorite.

Now, here they are with a chance to advance even further. Fellow state school Florida stands in FGCU's path, and that's probably a bad thing. The Gators have experience in snuffing out Cinderella's time at the ball. Ask George Mason and Norfolk State about their matchups against Billy Donovan.

No matter how high the odds are stacked in Florida's favor, we can't help but think that the Eagles at their best can go toe-to-toe with the Gators. After all, the high-flying act is now reality and there's no hiding the fact that this team is still alive and swinging. What's more, they believe they're as good as anyone in the country.

When that pendulum swings back against FGCU, it will be another dream vanished in a March history full of them. Loyola Marymount went on an incredible run in 1990 and lost by 30 to eventual-champion UNLV. The memory of the Lions will never fade, but their purpose was greater than the Eagles' - fallen teammate Hank Gathers.

In the end, we love to see the underdog make its way through the teams with a punch and a slipper. The bounces and whistles must allow for the happiness to continue. Sometimes, it's just not meant to be.

After watching mid-major teams make the Final Four and others pull incredible upsets, it's up to FGCU to keep the ball rolling. If not, the Eagles become another bump in the road to Atlanta. The story is great while it lasts, but it would be nice to see it last a little longer.

For those who find themselves pulling for the little guy this time around, they can see similarities in their own life. It's easy to classify yourself as an underdog due to education, income and a myriad of other characteristics. However, many out there - especially in this economic climate - feel like given the opportunity, they would be just as equipped to answer the bell as the other guy. It's possible they have the requirements and the know-how, but the chances just aren't there like they used to be. Their success wouldn't  be an upset per se, but rather something earned on merit.

FGCU provides the example with their phenomenal talent and smashing success. The Eagles have been just as good - and better - than the other guy without question. They've packed a better punch than the Hoyas and Aztecs. While there's no way to guess if they can take down the Gators, there is one thing that has become extremely clear:

This team won't need a slingshot if they play like they're capable.

6 Replies to “The Florida Gulf Coast Eagles: Not Just Another Plucky Underdog”