The early part of the college basketball season has not failed to produce drama or storylines. There have been upsets, fantastic individual performances, and teams struggling to stay afloat while battling the injury bug. Everyone has fought to get those precious non-conference signature wins that become so important come Selection Sunday. And while we’ve all been paying attention to the Power 5 and the Big East, the teams at the top of the Atlantic 10 have been quietly building resumes as impressive as any in the country.

Last night, Dayton rallied from a 16-point deficit late in the first half to secure a huge upset win over #21 Vanderbilt. The Flyers are now 12-3 in their last 15 games against SEC opponents. This season, Dayton has wins over Alabama, Iowa, Vanderbilt, and a Monmouth team that has beaten UCLA, Notre Dame and USC. The victory over Vanderbilt moves the Flyers to 6-1, where they join a trio of other A-10 teams with one loss.

George Washington has been equally as impressive, sitting at 8-1 with wins over #6 Virginia, Tennessee, Penn State and Seton Hall. Fordham is currently 7-1, and while their resume isn’t nearly as impressive as Dayton’s or GW’s, they do have a victory over St. John’s. The Rams are particularly interesting because they were picked to finish dead last in every preseason A-10 poll, and it will be fun to see if they can continue to outperform that prediction at this pace. Rounding out the A10’s one-loss club is Davidson, who lack a signature win but will have a few opportunities to get one with upcoming games against Pitt and Cal before conference play gets started.

While the top of the conference has certainly opened some eyes with its strong early season showing, what makes the A-10 even more intriguing is the fact that only one team, George Mason, has a losing record. Every other team is 4-3 or better. This should make for incredibly exciting conference play. The current top-four could finish in any order, and there will be a handful of teams floating just outside that fourth spot that will be looking to sneak their way in.

The fact that the conference typically gets four tournament bids annually will ratchet up the intensity to get into that top four. There is a wild-card at play that could further the ferocity of conference competition. With the top of the conference looking particularly strong, there is a possibility that a fifth team could see a bid. 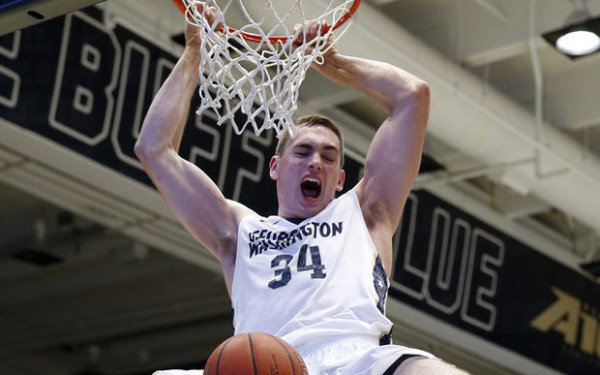 Barring something catastrophic happening, Dayton, GW, and Davidson look to be heading to the big dance. That leaves one, or maybe two, tournament invites to be had, and a gaggle of evenly-matched teams competing for them. VCU and Richmond will be the favorites to claim those spots, but the middle of this conference is wide open.

The Atlantic 10 may lack the prestigious teams that the power conferences tout, and it may lack some of the household names of college basketball. Yet the 2015-16 iteration of this conference deserves every bit as much of your attention as the big boys do. You will see some very competitive basketball, and the teams at the top of this conference are ones you may want to take an extra-long look at when it comes time to fill out your bracket.  Expect some thoroughly exciting basketball from the A-10 come January right through to Selection Sunday.