The game was supposed to be something of a harbinger of hope for the devastated franchise, as it was the first time its two lottery picks from the 2013 NBA Draft, Nerlens Noel, who sat out the entire 2013 season with an injury, and Rookie of the Year Michael Carter-Williams, would be on the floor together. Instead it turned into one of the most humiliating nights in the history of this once-proud franchise.

Carter-Williams’ line didn’t look bad, with 19 points, eight rebounds and five assists. Then again, he also had six turnovers and shot 6-19 from the floor. But no one cares about stats when you are losing by 50 points.

To make matters worse, this was just game one of a three-game swing through Texas, all of which extended the Sixers’ losing streak to open the season. Before this campaign even started, this little stretch looked brutal, and it turned out to be just that. Following the debacle in Dallas, the Sixers still had to stop in Houston to face a Rockets team that has been one of the hottest in the NBA to start the season. Then all they had to do was pay a visit to the defending champion Spurs. It looked like the Sixers were in for a rough couple of days.

The game in Houston was surprisingly competitive. The Sixers actually led for large portions of the game and never trailed by more than three points. They managed to hold a three-point lead with 35 seconds left to go. And then they managed to show why they are the worst team in the NBA.

Having the ball and that three-point lead, they committed an atrocious turnover, leading to a breakout for the Rockets. They committed the obligatory foul on James Harden, and head coach Brett Brown picked up a technical foul for kicking the ball, making one wonder if the team is literally trying to lose every single game. Harden went 2-3 at the line, cutting the lead to one. On the Sixers’ ensuing possession, Carter-Williams dribbled the ball off his leg and out of bounds for another turnover. The Beard then proceeded to hit a go-ahead jumper, Carter-Williams missed a jumper and the Sixers had lost a heartbreaker.

Sixers fans had to be proud of the effort against an incredibly superior team and proud of the fight to come back after getting totally embarrassed the previous game. That being said, they should have won the game, and the fact that they are an absolutely atrocious basketball team was reaffirmed.

To wrap up the Texas road trip, last night’s game against the Spurs went how you might have expected, with the Sixers trailing 30-13 after the first quarter and getting blown out yet again. They were never closer than 12 at the end of any quarter, and they were really never in the game. Again, there was no surprise here, and I’m sure the Sixers can’t wait to get back home and out of Texas. The three-game Texas trip netted an historic blowout defeat, a heartbreaking last-second loss and a sound beating from the defending champs.

Besides the embarrassment, two thoughts came to mind while digesting this debacle. One is, as a fan, how to balance the fact that you believe in the direction the franchise is going with the fact that your team just lost by 53 and is the joke of the league, and the team is asking you to watch/pay for this product. Two, what is the state of the NBA if THIS is the path teams feel they must take to successfully complete a rebuilding project?

Before the arrival of Sam Hinkie in Philadelphia, the Sixers were trapped in the worst possible place to be in the NBA, mediocrity. They were good enough to win just enough games to earn a 7 or 8 seed in a weak Eastern Conference, but they were nowhere near good enough to be a legitimate contender. And under the current structure of the NBA, there is no way to get out of that phase without going down first. They could either continue on year after year with 7 or 8 seeds and first-round playoff exits, or they could tear it down and start from scratch.

The regime(s) from the time Allen Iverson departed up until the arrival of Hinkie insisted on sticking with the sneaking into the playoff approach. So season after season ended like this: 7 or 8 seed, first-round exit, mid-teen (non-impact) draft pick, repeat. They were stuck in the mire. It was like the organization and the fans were just wandering through a fog.

Sam Hinkie arrived in town and made it clear he was taking a different approach. He immediately traded the team’s lone all-star, Jrue Holiday, on draft night 2013. The Sixers left that draft with Noel, the No. 6 overall pick, Carter-Williams, the No. 11 overall pick, and New Orleans’ 2014 first-round pick. 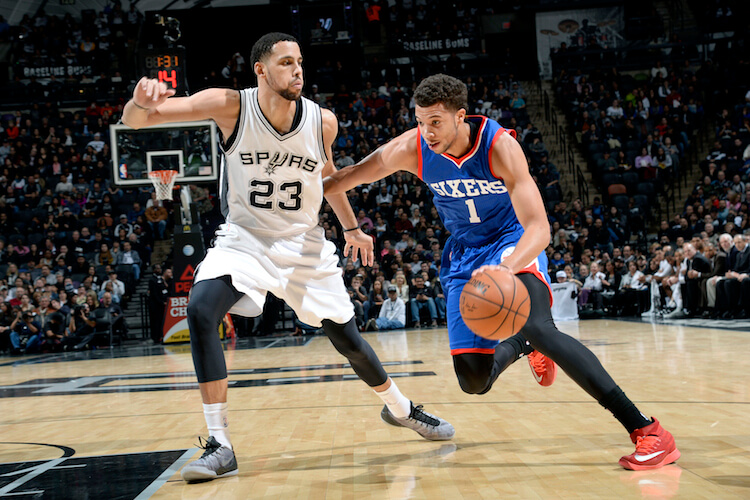 The fans were excited. It seemed that there was finally management in place who understood what needed to be done and who was willing to do it. Hinkie seemed to be a smart guy with creative ideas and some major marbles. It finally felt like the team had emerged from the fog, and instead of wandering the Sixers were clearly heading in the right direction.

They had two top-11 picks on the roster, with two more coming in the 2014 draft. That is where the first bit of dissent began to creep in. The Sixers ended up with the 3 and 10 picks. Those picks netted Joel Embiid and Dario Saric. You see, Sixers fans had just spent the entire 2013 campaign watching Noel sit on the bench with an injury. Now the next two lottery picks would also not be playing in 2014. Embiid is out with injury like Noel was last year, and Saric is under contract overseas. What fans had hoped would be a three- to five-year process is now looking to be more of a five- to seven-year process. These transactions began to make the Sixers faithful feel that its patience wasn’t being rewarded.

Hinkie’s plan of acquiring assets and creating financial flexibility is the right one. Being really bad, like worst-in-the-NBA-bad, is also required in the early part of the process, because some of the most important assets a team can have are lottery picks. Hinkie has certainly done a good job of stockpiling those.

The Sixers are in line for another potential top-3 pick in next June’s draft. They will add that to a core of Carter-Williams, Noel and hopefully a healthy Embiid. The hope is that that core, with a few years of development and the addition of a good free-agent signing or two, will put the Sixers in position to be a legitimate contender.

I believe if you ask Sixers fans, the majority of them would still say that they are on board with Hinkie’s plan and are optimistic about the direction of the franchise. But that doesn’t make it any easier to deal with your team losing by 53 points and starting the year 0-10. It’s at the point where it’s almost offensive to be asked to support this team with time and with money. Being bad is one thing. Being a joke is totally another.

Unfortunately in the NBA, except for in a few select cities, the only way up is to go down first. Way, way down. This is a league in which only five or six teams have a legitimate chance at a championship, and the fans know this. The remaining teams feel that the only way to become one of those five or six teams is to be really bad for a number of years. The Sixers have maybe four legitimate NBA players on their roster. To ask fans to watch this type of product, to ask them to spend money on tickets and merchandise, is at best disrespectful and at worst almost criminal.

Yet by all accounts Hinkie is doing the right thing. He is doing the only thing he can do to pluck this team from the mire of mediocrity and return it to relevancy. The structure of the league in which he operates dictates this. We all knew it would be a rough ride. But right now there is no way this is good for Sixers fans, and there is absolutely no way it is good for the NBA.

We can blame Sam Hinkie for that all we want, but really we should be blaming a system that necessitates such a plan.