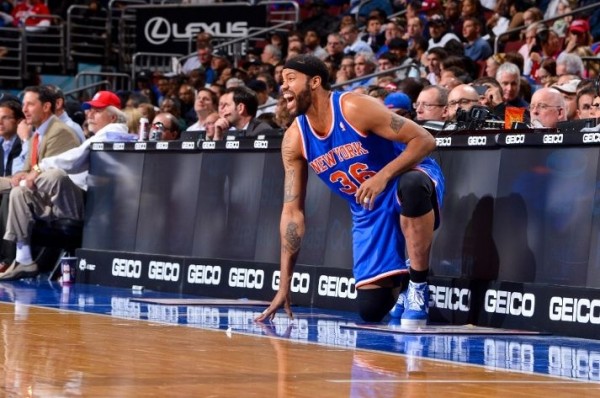 Have you ever tasted excitement from something that has kept you disappointed for years? The truth is I taste that excitement now. I have been a New York Knicks fan since the early 1980’s, and they have taken me to highs and lows that only a real fan can imagine.

We started off under Mike D’Antoni a couple of years ago, and it was obvious that the key piece that was missing was a go-to guy. We seemed to have all the pieces as Raymond Felton was re-energized as a player and Danilo Gallinari and Wilson Chandler were coming into their own as solid complimentary players. Sure we had Amar'e, but he was more of a scorer that needed to get the ball on certain spots on the floor; he couldn’t really get his own shot.

Then it happened … Carmelo Anthony demanded to be traded by the Nuggets and New York was ready to deal. Thing is, if we wait, we get Melo for far less and we keep the few complimentary pieces that go along with having an NBA superstar on the roster. Instead, we opted for the trade route and gave up everything and the kitchen sink to get the star, and at first it seemed like a good move because Mr. Big Shot Chauncey Billups was included in the deal.

If Amar'e and Chauncey don’t go down in that playoff series against the Celtics, there is a very good chance that we make a good run that year. Well at least I will keep telling myself that.

The next year rolls around and we amnesty Chauncey and get a big man to make our front court the best in the league on paper. Tyson Chandler at the center position, Amar'e at the power forward and the third best small forward in the league Carmelo Anthony make a formidable front court on any team. The problem was we didn’t have a real point guard to facilitate.

Melo goes down with an injury, and D’Antoni, in an effort to save his job, passed the reigns to the team to Jeremy Lin and “Linsanity” is created as he had one of the most memorable five-game stretches in the history of the game before the injuries took him hostage.

Needless to say the Knicks were in disarray. D’Antoni gets fired, and Mike Woodson takes over for the remainder of the year. When Mike Woodson moves in, Linsanity seems to lose some fizzle and then Amar'e goes down and Melo moves into the power forward position and the rest was history. It looks like Melo has found a home and is contributing in a major way. We finished the season on a nice run, but the playoffs were too much without a full roster and a proven point guard.

In the offseason, we made some moves and got Raymond Felton back (he actually worked out too) and things started to click. Now with Felton at the reins and Melo holding down the power forward position, the Knicks have the best record in the NBA. We are all giddy that the Knicks are doing work, but the outside world is wondering why Knicks fans are so excited this early in the season.

If you were a real Knicks fan you would know why. It has been so long since we have had anything to cheer about we are ready to jump at anything. Chances are like every team, the Knicks will hit that wall and lose a few games, but this team is different. They are aggressive, and they play defense.

It looks like Carmelo has bought in to playing hard and sacrificing stats for the better nature of the team. It will be interesting to see what happens when Amar'e returns and how he fits into the rotation. He can still be a force if there is a roll that fits his skill set. He and Felton were really good together before, and there is no reason to think that they can’t still be a force in the pick and roll together. Time will tell us whether or not this is possible.

As for now, I will keep buying tickets any chance I get to see my team that I so dearly love. For fans like myself it has been a long time coming.

6 Replies to “Temporary Excitement And The New York Knicks”