20 years ago, Shaquille O’Neal spurned the fun-loving Orlando Magic in attempt to win championships and restore Showtime basketball with the Los Angeles Lakers. Fast-forward to July of 2016, Kevin Durant left the pastures in Oklahoma City to bring his MVP trophy and out of this world scoring ability to the East Bay. Both moves were daring, controversial, but legacy changing.

When superstars leave via free agency, it’s a big deal. At times it can be big enough to shake up the landscape of the NBA, just as we saw with LeBron James when he took his talents to South Beach. It not a common occurrence, but when it happens, it’s an momentous experience. In lieu of Durant’s great migration to the Golden State Warriors, we reflect on the similarities during the free agency epochs involving Shaquille O’Neal and KD.

While the circumstances are different for the two former MVP’s, there is an eerie likeness to what has transpired between the two of them in the wake of their controversial, but groundbreaking decisions.

Prior to Los Angeles hitting the Shaqpot, the dynamic duo of Shaq and Penny terrorized the NBA while they were in Orlando. They were a nightly show as they wowed fans with a nightly highlight showing. Although a NBA title eluded them, with more seasoning as a unit a title would have been forthcoming in Orlando.

Like Shaq and Penny, a championship euro-stepped around KD and Westbrook in the early stages as a unit. Having youth on their side, it was expected that they would make repeat appearances in the NBA Finals, which never happened despite appearing in four Western Conference Finals. Even in defeat, the excitement still loomed, because of how good they were, and it didn’t help that they almost reached the NBA’s apex before entering the prime of their careers. In another degree of abnormality, both duos were sent home as they played their last playoff series against two teams who just so happened to set the regular season win total in this year’s Golden State Warriors and the 1995-1996 Chicago Bulls.

After leaving smaller markets such as Oklahoma City and Orlando, both O’Neal and Durant found their new home in California. Not to get this rendition of California Love mixed up with Dr. Dre, and the late Roger Troutman and Tupac Shakur, both superstars hit it off well in the Golden State. The bright lights and superstar feel attracts those to gravitate to the area. Shaq saw Los Angeles as a place where he could enhance his brand while chasing championships and, in the words of KD joining the Golden State Warriors, “will allow him to move out of his comfort zone to a new city and community which offers the greatest potential for his contribution and personal growth.”

Coincidentally, the brains behind both acquisitions is Jerry West. Twenty years ago, West’s pursuit of Shaq was epic, to say the least. He offered large amounts of cash (a seven-year, $120 million deal) that was unfathomable at the time and he accomplished the goal of bringing him to Los Angeles just weeks after pulling a draft heist by trading for a teenager by the name of Kobe Bryant. The intricate plan put together by West and the Lakers’ front office eventually gave the Lake Show consecutive titles.

In attempt to create a dynasty of his own up the Pacific Coast Highway, going after KD was made perfect sense. Courting a big name free agent wasn’t anything new him and the Durant sweepstakes was something he had already seen when he helped lured Shaq from the Magic Kingdom. West used his competitive nature that made him one of the best players in NBA history. As he utilized his powers to land the seven-time All-Star, it was reminiscent to how he approached O’Neal. While West is known as ‘The Logo’ he may have to change his name to ‘The Architect’ after overseeing two of the biggest free agent acquisitions in NBA history.

Leaving A Superstar Point Guard Behind

Russell Westbrook and Penny Hardaway have more in common than what you think. The point guards are two of the most transcendent players that the position has ever seen. One’s athleticism and sheer competitiveness is incomparable to what has been seen by other point guards and the other’s skills and grace set him apart from those who have played the position. Although the two are a rarity at the position, they are now both surrogate brothers when it comes to being left behind by megastars in Shaq and KD. Hardaway’s career took a downward spiral after the departure of O’Neal, and after being riddled by injuries he was never the same. While injuries aren’t the concern for Westbrook, the lack of help is.

To be fair, we’ve seen a small sample size of what he can be without Durant, and that’s arguably the best player in the NBA. KD will be joining forces with the reigning two-time MVP in Steph Curry. While the combination has a very promising outlook, the days of KD and Russ are now over, and it has a tart end to it. Sort of like the end of Shaq and Penny.

Despite winning four championships, Dr. O’Neal has been public about his regrets in leaving Orlando. In my personal opinion, I feel that Shaq’s disdain is that Orlando was so close to winning a title and he left his friends who were his teammates behind. By leaving his partners behind while he chased money, legacies, and championships, he felt it was a selfish move knowing that he was the leader, alpha dog, and best player.

As Durant declared his NBA independence, hopefully he can escape the feelings that haunt O’Neal until this day. The pressures of winning a title will be intensified now that he is a member of the record-setting Warriors. Trying to obtain security within his basketball legacy in joining an already championship-caliber roster will only add more criticism if failure is on the horizon. If Durant wins championships, good for him, but let’s hope that he is not filled with contrition like the Big Aristotle has constantly noted.

The feeling of departing his guys alone in a fairy tale city with false hope of what could have been clouds the championship memories. With KD, it could be the same story, just twenty years later. 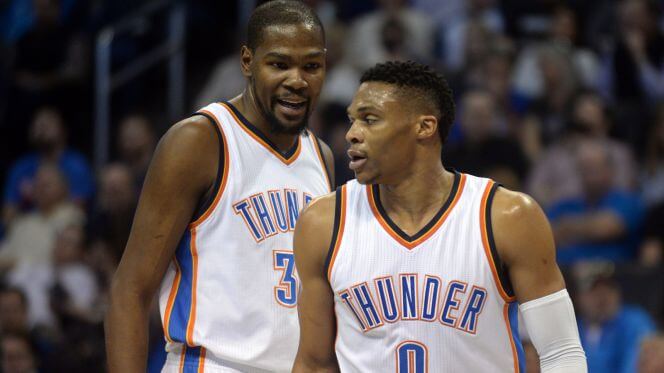 Basketball History Repeats Itself: The ‘ThunderSonics&#…
Basketball The Great Migration of Kevin Durant
6