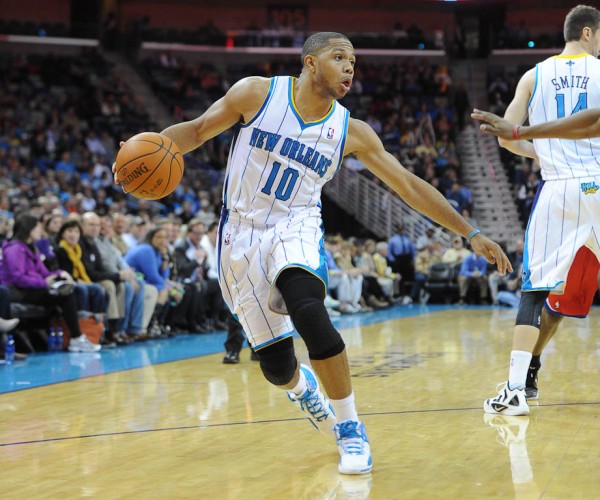 These types of questions usually come with a backstory. Let me share.

I'm minding my own business when I notice my phone ringing. It's the one and only Bryan Crawford. We go through the usual greetings, salutations, insults and all the pageantry that comes with chopping it up with your homeboy that you haven't talked to in awhile. Good times.

Inevitably, we started talking about the NBA Draft, in particular the situation brewing in the jambalaya pot that is the New Orleans Hornets. What was once a blackhole wasteland of 3rd-rate talent post-CP3 trade was suddenly burgeoning with quality assets. The Unibrow, Anthony Davis, is in full effect. The High Yella Prince, Austin Rivers, is ready to go. Most notably, the veteran of the three, 23-year old Eric Gordon is considering re-signing his deal to stay in The Big Easy.

This is where Bryan Crawford and I differ. Bryan Crawford says that by the Hornets drafting Austin Rivers, it means that the Hornets will be moving on without Gordon, because Rivers and Gordon play the same position. Moreover, Crawford  says that Rivers will eventually be better than Gordon. That's his opinion.

I, on the other hand, say that the Hornets could build their core around the triumvirate. Let Gordon stay at the 2-guard and consider playing Rivers at point. Jarrett Jack and Greivis Vasquez can still handle floor general duties, but Rivers could emerge in the mold of Russell Westbrook and Steve Francis. Take that for what it's worth.

Now, the Indiana Pacers have stepped in and offered their hometown hero Eric Gordon a max contract. (They're nuts, but they had to do it.) What say you, America? Should Eric Gordon leave New Orleans and go home, or should he stay with a younger core and finish the job? Let us know your thoughts as you peruse your pertinent reading material on Tuesday.

Beyond The Arc: ‘Ironhead’ Heyward’s son tears his ACL