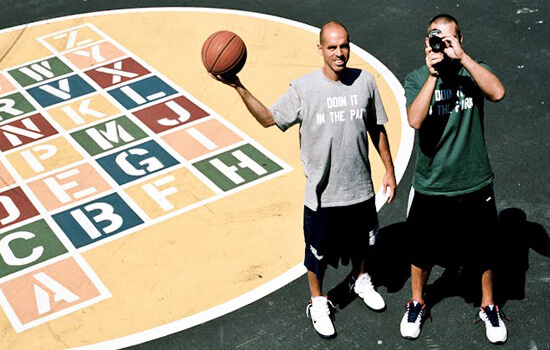 Last month here on The Sports Fan Journal you might remember us featuring a trailer for a new documentary film by Bobbito Garcia and Kevin Couliau called "Doin' It In The Park." The film, set to capture the essence of pickup basketball in New York City, has been screened from coast to coast and the feedback has been insanely positive.

I was fortunate enough to chop it up with Bobbito and Kevin earlier on FOX Deportes to talk about the film, their personal experiences playing pickup basketball, Kenny Smith's ultimate experience, and hooping in NYC versus anywhere else in the world:

Deportes: Explain to people who don’t understand, what is the cultural landscape of pick-up basketball like in NYC vs. France?

Kevin: New York City counts 700+ outdoor basketball courts, whereas a city like Paris counts around 50 playgrounds. A simple fact that easily demonstrates how basketball is deeply established in the big apple. The game is a recreational tool that generates social link between people of all ages. New York City is the only place in the world where you can play pick-up with a college kid, a Wall Street trader, a woman and a 70 year old man at the same time. Growing up on the French playgrounds is slightly different even though we are really influenced by the American culture. Our perception of the game is more “team” oriented so we don’t really experience games like H.O.R.S.E, 21 or 5-2. The beauty of playing pick-up in NYC resides as well in its environment; Parks & Recreations has done a tremendous job designing basketball courts like nowhere else on the globe.

Bobbito: I’ve played ball in 35 different countries and 5 different continents, so I’m unique perspective in that I have a true perspective of how special New York is. There are people from New York that will boast and brag, and they’ve never left Brooklyn. New York City basketball is as unique of a sports environment there is in the world. Partly because of the history, the skill level, the audience…people sitting on the sideline could possibly be extremely knowledgeable of the game…and they’re giving you business talking smack and they’re not even on the court. The history of the game in New York is unmatched. From the Black Fives to the Harlem Rens, to the New York Celtics, barnstorming games and the Madison Square Garden. The Knicks are the highest grossing franchise in the league, regardless if they win or lose. This is the Mecca of basketball; we have the two most recognizable outdoor courts in the world in Rucker Park and West 4th. Maybe Chicago had produced more players but New York has more history.

Plus, New York City has over 700 outdoor courts. Japan only has 25 in the entire country. People will email me from overseas asking to hoop with me; I say sure, come join me at the open run.

Be sure to read the full interview for more,  and if you're fortunate to be able to catch a screening then do so. Here is your pertinent reading material for Monday.

SLAM Online: James Harden Believes a ‘Dynasty’ is Being Built in OKC

Hardball Talk: The Cubs gouge fans more than any team in baseball

Day and a Dream: Make It Rain: The King Of Diamonds Reality Show Is Coming

Esquire: Things to Which You Should Toast

espnW: Women's 100 tiebreaker solution not a practical one

One Reply to “Starting Lineups: So Ed Chopped It Up With Bobbito Garcia Last Week”