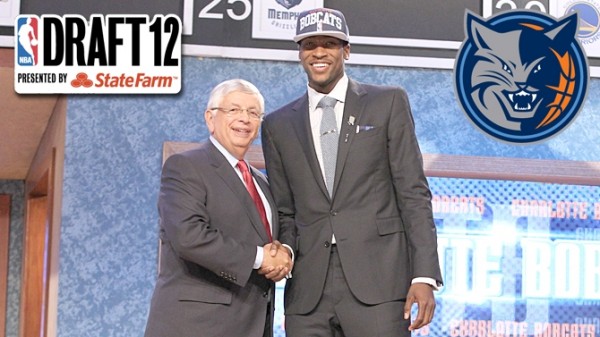 The 2012 NBA Draft officially came and went. Teams like New Orleans, Sacramento and Houston came up immensely in the draft. Other teams like Cleveland and Toronto left us scratching our heads per usual. Players like Jared Sullinger, Perry Jones and Draymond Green fell down the draft board - players who were once revered were now draft casualties.

Of course, one of the interesting subplots of the NBA Draft is always the suit game. In our childhood, we saw players like Samaki Walker and Jalen Rose hit the stage with suits that had tons of ... character. Now in 2012, the suit game is a serious one, and the players don't take this lightly at all.

I was fortunate to quickly chop it up with Edward Archer, co-founder of The Sartorial Collective, who along with Brennan Rabb, was able to get the Charlotte Bobcats first-round draft pick Michael Kidd-Gilchrist suited and booted for the glorious occasion. Would MKG be rocking a pair of egregious frames like many of our favorite NBA stars?

TSFJ: When Kidd-Gilchrist gets drafted, he's going to have a busy schedule. There’ll be press conferences, radio shows and so forth. Have you been working on his media-blitz wardrobe?

Edward Archer: It has been a busy time! We have been making sure that he has a comfortable yet stylish look throughout the week. Everything we have coordinated for him is quick to change into, but also very sleek and modern.

TSFJ: What were Kidd-Gilchrist's thoughts on the wardrobe? Things he likes versus doesn't like?

Edward: We believe MKG was pleased, and that's really what matters most.

TSFJ: What’s the most difficult part of picking out clothes for athletes?

Edward: At times, it can be challenging to find the right fit for such an athletic build, especially for Kidd-Gilchrist. Because of their height and size, you have to be cautious about how the clothing will appear in photographs. We want each client to walk away feeling like the whole styling process was effortless.

TSFJ: Egregious glasses have become a popular look for NBA athletes. Do you approve?

Edward: Guys are entitled to pursue their respective fashion interests. We have no issues with expressions of personal taste.

I'm just glad MKG wasn't wearing those glasses with no lenses in them, personally. Here is your pertinent reading material for Friday. Enjoy the weekend.

FOX Deportes: Retirement can wait: Ortiz focused on settling the score with Griffin

Day and a Dream: Watch The Trailer For Spike Lee’s “Red Hook Summer”

Edge of Sports: Sandusky's Crimes and the Accountability of Pennsylvania Gov. Tom Corbett

Bomani Jones: The Oklahoma City Thunder Need A Boost From A Booster