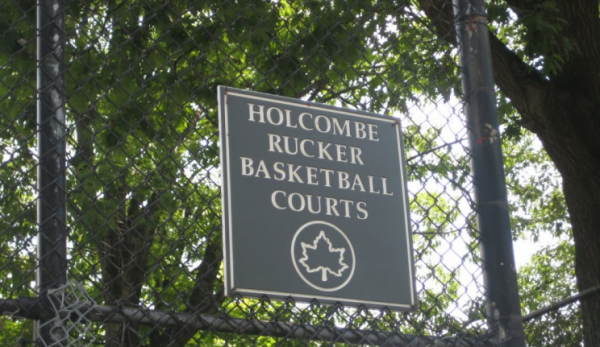 Living in the shadows of the Polo Grounds in modern times means that in some way, your Harlem life is shaped by the sporting history of 155th Street and Fredrick Douglass Boulevard. Where Willie Mays once roamed the abnormal outfield and Bobby Thompson inspired arguably the greatest radio call in sports history has stood one of New York’s most notorious housing projects for over 40 years. Across from that very development is another piece of athletic history: the Mecca of streetball called Rucker Park.

This past Tuesday night, as most summer nights, the Rucker was the place to be if you were jonesing for some highly competitive hoops and star-gazing for entertainers.

(Maybe it should be mentioned that in a lifetime of community involvement and 15 years of living mere blocks away from the Rucker, this Scribe has only visited the famed court … twice.)

In what would be considered an extraordinary night in some places was just another night at the Rucker … ah, who am I kidding? It really wasn’t another night there as rap legend Nas was scheduled to have made an appearance. Mr. Jones – whose album, Life is Good, had been officially released that morning – was the reason for a large influx of spectators from Queens, but he certainly would receive some love from the Harlem fans in attendance.

As for actual basketball, Anthony Morrow (currently of the Atlanta Hawks) headlined one of the night’s two contests as his squad, Certified, was there to cement itself as the premier team in the famed summer tournament.

There are two things that people have to understand about Rucker Park. One, entertainment is on par, if not above, winning the actual game in some cases. In the way that the crowd and announcers razzed teams the first game between Bronx-based AT&T and Queens-based Basketball Results, you’d be inclined to think that there were as many acrobatics and ankle-breakers as UConn-Butler (which is to say that there were none). In stifling heat and the air thick with anticipation, fans were stirring around, waiting for something to happen … and kept waiting … and kept waiting …

In the second contest, though, with Morrow looking to assert himself, Certified provided some razzle-dazzle … but not before one of the most hilarious run-in/interruptions since the days of the nWo. After a taping of Comedy Central’s "The Colbert Report," Nas and his entourage strolled onto the court, despite there being just over eight minutes left in the second quarter. Mobbed by fans, photographers and a security group forgetting to secure the crowd, Nas soaked in the adulation, gave the right angles for smartphone pictures, and signed autographs for a good 10 minutes before giving thanks to the Rucker crowd for its support.

Nas’ arrival was more or less an eruption of the crowd as there is in one and a half games … Fortunately, once he left the court, Certified picked up the pace with a few powerful dunks and some hard knocks at the rim.

The second aspect that fans need to keep in mind is that as despite the emphasis on entertainment, as an actual player, if you’re not aggressive here, you’re not even trying. Whether a team boasts a solid NBA player as Certified’s Morrow, plays against the Association’s best like Kevin Durant and Kobe Bryant, or features prep stars and streetball legends, no player that steps on the court is allowed to be timid. And it’s virtually impossible to be in the small confines of the Rucker.

Eliminate traditional sidelines as the court is bounded by ad-plastered barricades, team benches, an overflow of fans, and barely six inches of room to inbound. Add several photographers hounding the players while in play (in a couple of instances during the games, passing lanes were cut off by said photogs, infuriating players and coaches alike). And, finally, there are the announcers dying to give a player a nickname if he does something spectacular, but also serving up jokes and flirts when distracted by scantily clad ladies in the crowd.

Each of those elements actually makes the already small confines of the court thatmuchmoreconfined. You end up having the kind of ball where trying to attack the basket can become roller derby or Aussie Rules Football, whichever you fancy. Drive-and-kicks are far more common than pick-and-rolls. Everyone gets bumped, scraped, bounced, and pushed around - more often than not unintentionally.

Plenty of you wonderful readers come from outside of the Five Boroughs, from cities that boast some incredible basketball courts like Chicago’s Jackson Park, Oakland’s Mosswood, etc. Though the game may be the same, each court must have its own personality, flair and culture that makes it unique. To even compare each sacred ground is unfair.

Yet, what makes the Rucker THE RUCKER is that like the famed Apollo Theater three miles south, or to some degree, Madison Square Garden, players want to impress the crowd as much as they want to win. Certainly, being in New York City shines a greater spotlight than is the case for other courts, but take one look at the list of great athletes that stepped onto the court or played in the summer tournament throughout its history, and you understand why the Rucker matters.

6 Replies to “Nas, Black Boi Pachino and Shocking The World at Rucker Park”