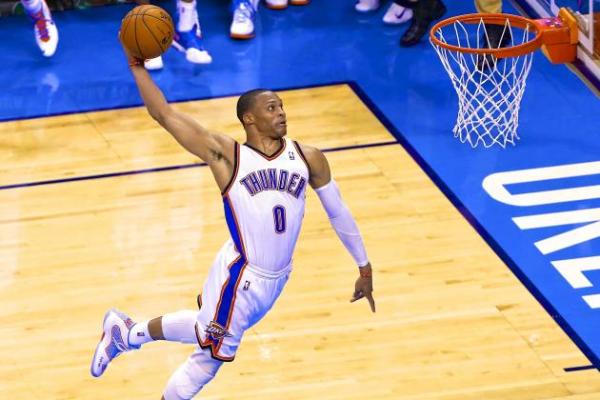 When the devastating news broke that Kevin Durant would be missing anywhere between six to eight weeks of action, I admit my first thoughts shifted away from Durant. It's not that I wasn’t concerned about Durant; watching anyone forced out of a game he loves because of an unforeseen injury is always a crushing sight. Yet knowing the NBA season would start without its reigning MVP didn’t deter me from realizing what this meant for the Oklahoma City Thunder moving forward. This is Russell Westbrook’s time to shine.

Now before going into why this is such an exciting development for the Thunder, let’s dispel some of the more absurd notions.

Westbrook is not replacing Kevin Durant

This shouldn’t even need to be said, but somehow it's something that has to be addressed if only briefly. Kevin Durant is one of the most prolific scorers in NBA history and currently the lone challenger for the Best In The World title that belongs to that guy in Cleveland. You don’t replace an athlete like him because in reality you can’t. His absence, no matter how brief, will affect OKC in ways that will become more evident as time draws on, but the Thunder are far removed from needing a panic button. They have the rare distinction of having two of the top 10 players in the world on their roster, and Westbrook’s stock has risen in light of this. OKC may not be able to contend for a title without KD, but fortunately they won’t have to in December. They are in very capable hands on a team temporarily being led by number 0. 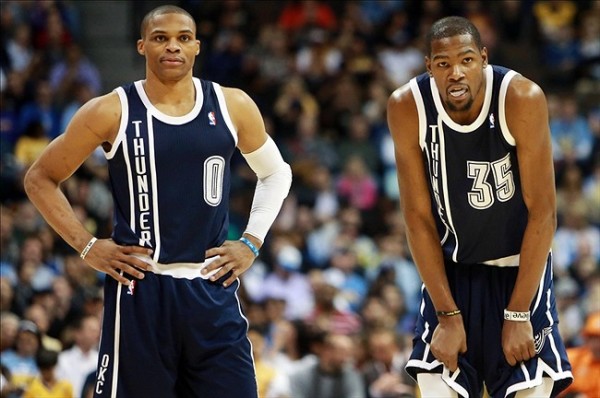 When I was younger, an older relative told me, “50 percent of all jokes are true.” As an avid user of social media, I find relevance in that quote daily. That is why it frustrates me to no end when I see “jokes” targeted toward Westbrook’s inability to serve as a true point guard. There are truly people who actually believe this. As ridiculous as it may sound, there are questions on whether or not Westbrook’s style of play is conducive to his ability to play the position that he is without a doubt one of the best at in the NBA.

Yes, he shoots and scores at clips that may not fit the traditional point guard mold, but that doesn’t diminish his ability as a floor general. Being able to dominate games through scoring is just as vital to what makes Westbrook so incredible as his athleticism and elite play-making. With Durant gone, OKC has the luxury of allowing him free rein to do what he does best, with the comfort of knowing that he can dial it back as needed. Anyone suggesting that Westbrook lacks the skill set to properly manage a team never really understood his game to begin with. It is not a stretch to say that Westbrook will see career highs in scoring with KD sidelined, but I’ll go as far to say that he’ll see career highs in assists as well.

The Thunder are a one-man team until Durant returns

Contrary to popular belief, Westbrook doesn’t play an “every man for himself” brand of basketball. The Thunder rely on his abilities to keep the momentum swinging in their favor just as much as they do KD, but the fact that Westbrook has always been seen as the second option there draws a lot of unnecessary criticism. If we are to be completely honest, Scott Brooks' lack of creativity with play calling has more to do with the Thunder's limitations than how their point guard operates. Brooks' system is so reliant on his two primary players' strengths that the effect trickles down on their substitutes (see Reggie Jackson).

When I said that I expect to see career highs in assists for Westbrook, I meant that in the sense that he understands he can’t do it alone. He’ll be asked to carry a heavy load until his partner returns, but this will be more of a test for the rest of OKC than it is on him. It will be his job to incorporate guys like Jeremy Lamb and Perry Jones III in ways they haven’t had to account for yet.

The jury is still out on how effective this surrounding cast is in Oklahoma City, but with Westbrook leading the charge, we’re going to find out fairly quick. Having a pillar such as Serge Ibaka there to maintain consistency, and even Kendrick Perkins provides a familiar presence. Obviously we can talk about the negatives of Perkins all day, but we know how he’ll function in the lineup. That’s one thing Westbrook won’t have to stress as he grows accustomed to extended minutes playing alongside Andre Roberson and the recently acquired Anthony Morrow.

In a pivotal season for himself, Reggie Jackson will benefit greatly from this arrangement. His ability to play on and off the ball allows Westbrook to flourish when OKC needs him to take over and also provides a steady hand in keeping the balance flowing throughout the rest of the rotation.

Yes, Westbrook could very well go into every game with the intent to steamroll over opponents and probably find success in it, but for the long-term sake of the team, expect him to help his teammates develop and progress more than anything.

Trust the process and let Westbrook be Westbrook

Russell Westbrook is one of the more uniquely skilled, and entertaining, players in the NBA, excluding nobody. Add that to his charismatic personality and attention-grabbing pre-game outfits, and it's safe to say that he’s also one of the most polarizing.

The Oklahoma City Thunder will be counting down the days until Kevin Durant is back in their rotation, but watching Westbrook perform in a role that many have always been anxious to see is going to be a delight every evening. Westbrook unleashed is something that all NBA fans should be excited to see, regardless of how limited that moment will be. The game is just more fun with him around.

6 Replies to “Setting The Stage For World War Westbrook”