The funeral was being planned, with the eulogy for the Cleveland Cavaliers brewing after the team showed up to Oracle Arena resembling the Washington Generals in the first two games of the NBA Finals. The memes were pouring in, and there were crying Jordan faces perched on every social media outlet that had something to do with the demise of the Cavs.

Basketball experts and strangers to the game gave an inkling that the series would be over in four games after the paltry effort in Games 1 and 2. Based on those two games, it wasn't a surprise that people thought Golden State would bring out the brooms. With the Cavs one step away from seeing everyone at the crossroads, they received an unexpected spark.

In the NBA Finals, matchups dictate lineups, but as has been the case for the last two Junes, injuries can do the same. Rewinding back to last year, the Warriors were down 2-1 heading to Cleveland. To inject life into his team, Steve Kerr inserted Andre Iguodala into the starting lineup in place of Andrew Bogut. The move paid dividends, flustering the Cavs. Golden State won the last three games to win the NBA championship, and Iguodala won the Bill Russell Finals MVP trophy.

Fast-forward to this year, and Richard Jefferson is the player playing a similar role as his fellow Arizona Wildcat. No, that wasn't a typo, we're talking about the same R.J. that was once teammates with his head coach Tyronn Lue. In the words of the late, great Aaliyah Haughton, Jefferson has proved that age ain't nothing but a number.

With the Cavs' season on the line, the 35-year-old was inserted into the starting lineup while Kevin Love sat out due to concussion protocol. Many figured that the Cavs would sputter without their all-star big man, but as mentioned, the playoffs are all about matchups. Placing the one-time member of the Warriors into the lineup gave the Cavs an edge, and they may have found something that has been missing in their arsenal. In some retrospect, having Jefferson in the starting lineup seems like a no-brainer, as he was arguably the second-best player for the Cavs through the first two games of the series. 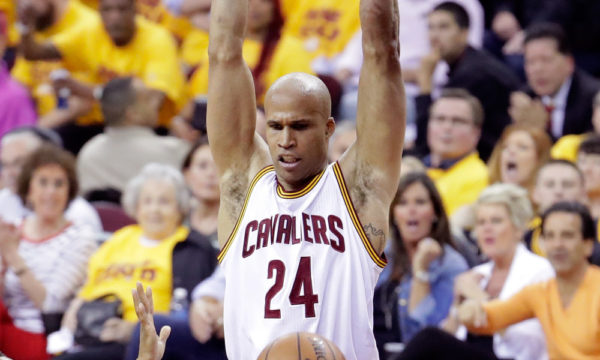 In Game 3, the Cavs played faster, harder and smarter, and a lot of it had to do with Jefferson being inserted into the starting five. He appeared to look young and nimble as he was flying around the court, contesting shots, rebounding and sacrificing his body at any given moment. With the tone set by the 15-year veteran, Cleveland jumped out to a 20-point lead in the first quarter. The effort displayed throughout the game was night and day from what was shown in Oakland.

While Jefferson had a solid nine points and eight rebounds, he did a lot of things that did not show up in the box score. Starting R.J. allowed the Cavs to play their own version of small ball. Coming out of the gates, it posed matchup problems for the Warriors, as Andrew Bogut was often caught in no-man’s land while attempting guard Kyrie Irving on an island. Normally, that is the advantage that the Warriors have on teams, but in Game 3 the shoe was on the other foot.

The biggest impacts during the game were the activity on defense and attention to detail that Cleveland demonstrated. Although Jefferson is a few years away from being over the hill, he can give effort on both ends. His athleticism and effort allow the defense to switch and rotate faster. Not to slight Love, but using a player such as Jefferson against Golden State gives the Cavs a better chance to win. To no surprise, the Dubs are reliant on the pick and roll using Steph Curry and Draymond Green as the modern-day Karl Malone and John Stockton. Coupled with the ability to move the ball on the fly, it’s essential to have the players who can help contain the high-octane offense of Golden State, and the high-flying 35-year-old did just that.

Sure, it’s no secret that Love is the better all-around player. But as we’ve seen in the four games this year (two regular season, two NBA Finals games) against the Warriors, the former 20-20 machine does not match up well playing against the sharpshooters in the East Bay. Jefferson didn't go all Gary Payton when it came to playing defense, but his versatility on that end was vital. Whereas on offense Jefferson’s movement allows LeBron James and Irving to pick apart the stout defense of the Warriors, it also gives James and Irving more freedom to be aggressive since Jefferson isn't someone who needs plays called for him to make an impact.

Despite the fact that the Cavs were on life support, the addition of Jefferson in the starting five could possibly revive this team to tie up the series and even win the NBA title. As Game 4 approaches, it will be up to Tyronn Lue to decide if he wants to keep Jefferson in the top five or bring him back to the bench if Love is healthy enough to start. For the benefit of the team, it would be best not to ruin the momentum by changing the starting lineup again and moving Jefferson back to the bench.

Playing in the NBA Finals is never a guarantee as a player, and for the first time in 13 years, the opportunity is present for Richard Jefferson. While he may not win the Finals MVP award a la Iguodala, he still has a fighting chance to win that first NBA championship ring that eluded him many years ago as a member of the former New Jersey Nets.

Calling him a savior after one game may be premature, but if the Cavs come back to unseat Golden State, Jefferson may never pay for a drink in Believeland ever again. Despite Cleveland's slow start, the Cavs aren't dead yet, and Richard Jefferson is an unexpected, but welcomed, reason for why they no longer need the defibrillator.