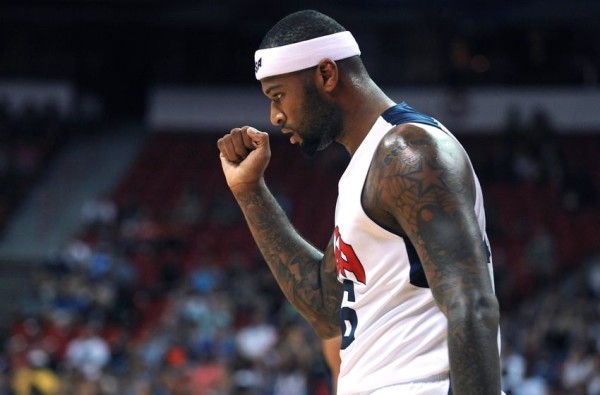 With just over a week left until the 2014 FIBA Basketball World Cup, Team USA is close to making its final cuts. As capable as all of the remaining players are, this team just won’t be complete unless DeMarcus Cousins is included.

For a squad that will largely represent the future of the sport in the United States, denying people the chance to see Boogie Cousins on a world stage would just be plain rude. If coach Mike Krzyzewski and Rudy Colangelo are truly for the people, then this roster inclusion should be a no-brainer.

Let me be clear, I’m not making a case that Cousins deserves a spot on the roster over, let’s say, a Mason Plumlee. If Plumlee has performed up to the standards that Coach K believes fit the roster, then by all means keep him. The inclusion of one doesn’t necessarily affect the other, and comparing the two is pointless anyway. You can play the role of devil’s advocate all you want, but there is nothing that Plumlee provides over Boogie in anything. Outside of personal preference, anything suggesting otherwise is trolling at its best.

No, this is about including not only one of the most talented players, but also one of the most passionate. In a world where pro athletes are expected to tone down their personalities for the “integrity” of the game, Boogie has always played to his own beat. Any range of emotions that can be stirred from the Sacramento Kings center has been elicited at one point or another.

Sure, he’s prone to over-reaction, stand-offish at times and doesn’t let things slide easily, but those are all traits of someone who actually gives a damn.

He's also fair, easygoing when needed and an entertainer at heart. All of these characteristics not only make him a strong competitor, but one fit to represent America. It also doesn't hurt that there are only a handful of players on the roster better than him, and for a team lacking genuine big men, his mere presence is a gift.

There are plenty of players who will enter these World Cup games and treat them all the same. There will be some who coast through them due to their considerable talent level and not bat an eye if the results aren't in their favor. Then there is Boogie — a player who hates losing, no matter what the stage. Providing him a chance to play the game that he loves in meaningful competition is more beneficial than most realize.

With the Kings he'll struggle to play worthwhile games all season. The Western Conference is simply too stacked, and as the player tasked to lead a team doomed to failure, World Cup exposure will surely build his character. When placed in a situation that seems utterly hopeless, people tend to forget how powerful it feels to achieve something. With Team USA, Cousins has an opportunity to capture that feeling. Renewed meaning adds a perspective to that Kings locker room that's probably been missing for sometime.

He's among a talented group of his peers and playing for one of the game's most respected coaches in history. Boogie has all the talent in the world, but he still has to rightfully prove that he belongs there. There are others whose spots are far from guaranteed but none with the reputation (fair or not) that Cousins has. Knowing that, his commitment to the team hasn't wavered in the slightest, and this is while he's also nursing a knee injury he suffered in practice. Many players would have bailed out for that reason alone. If hard work and dedication are foundations that America prides itself on, then Cousins has been a shining example for this team.

Team USA will be a force to be reckoned with no matter what the final roster reads. DeMarcus Cousins simply enhances that notion, while also keeping things interesting. There will be blocks, there will be dunks and there will certainly be outbursts. His boldness is something to be desired, but his passion is everything that's beautiful about the country he's aiming to represent. Boogie deserves the chance to show the world just that.