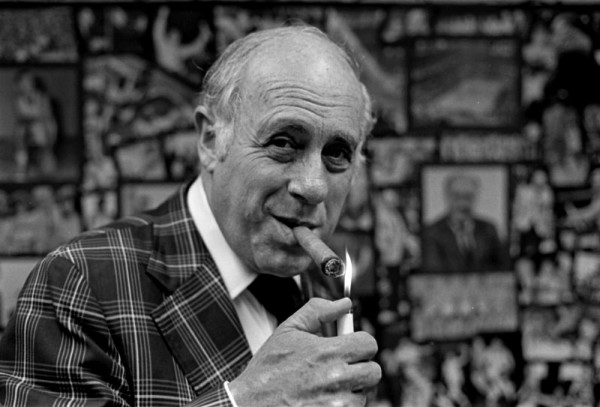 Contrary to popular watercooler discussion, flopping has been around for decades. Just ask Red Auerbach.

Allow me to run through two things prior to getting started.

1. In the near future, I'm going to create my own job as YouTube Research Pop Culture Specialist. What does this position entail? Well, for one, my office would be wherever a strong wi-fi signal was, and it definitely wouldn't drug test. Two, I would find amazing but low-viewed YouTube clips.

2. One of the biggest debates that's lasted throughout this NBA season has been the generational divide, aka "this generation is better because of X reason, and if you disagree you obviously are misinformed about the game of basketball." As if simply appreciating the way the game has evolved but also the game's massive history are mutually exclusive. Or as if a person saying he or she is a fan of 6'10" pterodactyl scoring machines (Kevin Durant) or 6'9" concrete slabs with the speed of Sonic The Hedgehog (LeBron James) or point guards who jump higher than most centers (Russell Westbrook and/or Derrick Rose) is squatting over and dropping a deuce on the legacy of names like Jordan, Magic, Dominique, Barkley, Moses, Kareem, Bird, etc. Or vice versa. Seriously, it's been the single dumbest and tiresome sports debate to avoid 0n Twitter, in barbershops, in bars to even the checkout line at grocery stores largely in part because both sides are guilty to an extent. The second biggest debate is flopping.

Dating back to last year, the decision by the Stern Empire to fine individuals who sold fouls was a hot topic. How does one define a flop from a legit foul? Would the rule truly work? Did they actually think it'd abolish flopping altogether? And you know what, for a large portion of the season the mandate seemed to work on the surface. It's either that or most of us didn't give a damn about flops occurring in Kings/Bobcats game so we swept said complaint under the rug until the games began to matter. Fast-forward to the present day and all the rage centers around flopping.

There was the comical Derek Fisher/Kevin Martin 7-10 split-flop in OKC's opening round against the Rockets.

J.R. Smith's flop in Game 1 versus the Pacers was only the tip of the iceberg of his problems that series. None of us knew it at the time, but the "curse of Rihanna" was looming.

Jeff Pendergraph was whistled for a flop against Atlanta in a series that may or may not have even taken place.

Tony Allen had a top five flop of all time. It was so well-timed that starting June 1 I'm tweeting @TheAcademy every day until Tony is nominated as Best Supporting Actor In A Drama (if you want to label the West Finals a "drama").

So, yes, there's a pattern here. Hip-hop has "molly." Basketball has flopping. And like rap's current drug-de-jour among the younger crowd, today's flopping feels like a stronger dosage of what has been around for decades. The 2013 Eastern Conference Finals have been a case study in flopping. LeBron James is the most visible player for his stance or stances (first he claimed he's never been a player to flop, then admitted how he understood it could be of value to a team), but the fact of the matter is everyone is getting involved in the act including David West and Lance Stephenson.

Yet, contrary to popular belief, taking stage dives has been an unreachable scratch in the NBA for years, even dating back to the era when cocaine usage was the league's number one deterrent. Many moons back, an old head at a barbershop I once frequented would ramble for hours if the shop let him how players like Michael Jordan and Magic Johnson "sold" calls to gain advantages. He never took away from their greatness and even understood the purpose, but he also said the league has had "divas" for years. The only difference was "way back when" a player could sucker punch someone in the mouth and get away with it.

And it's true. Even the late Red Auerbach was fed up. Take this video below from sometime between 1974 and 1976.

You should notice a handful of neat traits about the video. Red's Celtics jacket was fresh. Elvin Hayes could pass for Avon Barksdale's pops, or at least uncle. Paul Silas' beard/afro combination most certainly could've made him a Black Dynamite stunt double. And who the hell is Mike Riordan? The clip itself serves as a testament of how often perception fairly and unfairly alters with time.

"Initially, I was trying to free my teammate, Elvin Hayes, here for a jump shot or move to the hoop without the ball. Also, if I could get away with it, to draw a foul on Wes on setting that pick. To fake a foul in other words," said Riordan, who to my surprise was a 10-point a game scorer in his nine-year career.

From there, Red and retired ref/officiating guru Mendy Rudolph (awesome name, by the way) break down the science of flopping. At one point, Auerbach damn near blows a vein in his neck when speaking of high school, college and pro coaches who teach their pupils to take dives for the team.

There's not much else to say about the four-minute tutorial that has made its rounds in years past. It's better to let Red do the talking anyway in a video that's as relevant today as it apparently was then. Those last six seconds are one hell of an ice breaker, though.