During the 1991 Eastern Conference Finals, soon-to-be New York Knicks head coach Pat Riley sat down with Michael Jordan for what resulted in one of the most revealing interviews of His Airness' career.

Think of your hero. It could be your parents, grandparents, siblings, friends or whoever. It could be an athlete. It could be an entertainer. It doesn't matter. We love heroes because we remember them at their strongest. They fit the mold of a larger than life figure, a security blanket and an example of everything right in the world. The funny thing about heroes though? They're regular people and there was once a time they felt the same insecurities and pressures like you or me.

Before Barack Obama became leader of the free world, imagine the nervousness he had when taking Michelle out the first time. Damn any campaign he'll be on between now and November, he was probably more worried about not saying the wrong thing about her outfit. You want a hilarious and humanizing story? Ask your parents or grandparents how they met. Lance Armstrong probably fell off a bike more times than he cares to remember. The lesson is this - heroes never know they'll become heroes.

In 2012, Michael Jordan the basketball player is everything. Mike is the definition of winning to a generation who never saw Bill Russell. He's the epitome of leadership. He was above and beyond the most popular athlete in the world for close to a decade and still stands as the most recognizable with respect to Muhammad Ali. Michael Jordan - in terms of miracles on a basketball court - is and probably will always be the closest thing to God to millions. That's just it though. A large percentage of Jordan worshippers remember the six titles, the Finals MVP's, the "flu game" or the "last shot." For as important as those are to his legacy, it's unfair to simply classify him as just that.

Those who've never taken the opportunity to immerse themselves in Mike's entire career fail to remember there was once a time when the world wondered if the league's most talented and exciting player would ever graduate to "world champion." That, my friends, is everything pre-June 1991; a B.C. era if there was one in sports (Before Championships).

In 1991, while the Bulls were in the midst of overcoming the one team to repeatedly kick their championship dreams in the nuts - the Detroit Pistons - then TV analyst Pat Riley sat down with Michael Jordan for a near 10-minute clip, which has since become lost in history. He openly admitted wanting to play the Portland Trailblazers instead of the Lakers because the latter had the upper hand on experience. And for a guy who loved the spotlight more than anyone in recent memory, he wasn't too enthused about the thought of having the attention of the entire country fixated on a Clash of the Titans-like matchup between he and Magic Johnson.

Michael, for everything he had accomplished up to that point, appeared calm, but remarkably humble. Knowing how the story ended, hearing Jordan actually contemplate not playing in the 1992 Olympics was stupefying. Seriously, take a moment to imagine that team without Jordan. They'd have still won by 40 every game coasting to the gold, but we would never have the stories of him, Magic and Charles Barkley staying up until 6 a.m. playing cards only to play a game some three hours later. Could they have really been called "The Dream Team" if the unquestioned best player on the planet never made the trip to Barcelona? Probably, but it's better he did anyway.

Ask an old head who was around to appreciate basketball in the '70's and '80's about Jordan prior to his first ring. The response between theirs and someone younger is like asking what a person thinks of OJ Simpson. Some know him as "The Juice," while some simply remember him as the guy who Johnnie Cochran and Kim Kardashian's daddy saved during the biggest murder trial of the past 25 years. Anywho, said old head will most likely tell you Jordan was a one-man wrecking crew who only cared about himself, getting his numbers and doing everything he could to win. If he fell flat, it was because of his teammates, not him. He was a killer on the court, and while he led the league in a host of statistical categories, he ranked dead last in accountability.

This is exactly the reason his MVP in 1991 changed so many minds. Mike seemed to get "it." Not to say he hadn't in years prior, but it came full circle with Jordan realizing if he wanted to be called champion - regardless if there was an "i" in the word - no one player had ever gotten to the mountaintop without trusting his support system. Accepting the award at half court with the guys he went to war with, Mike was emotional, nervous and at times uncomfortable. You could almost say the same when LeBron had his press conference a few weeks back.

The pressures of trying to live up to being "the best" in your profession based off the talents God gave you is one thing. Attempting to have them sing in perfect harmony with what the world's perception of a "winner" represents is the true test. Building the wall of invincibility around his team meant tearing down his own insecurities (which sometimes masked themselves as strengths). And once he did that, the league was never the same. 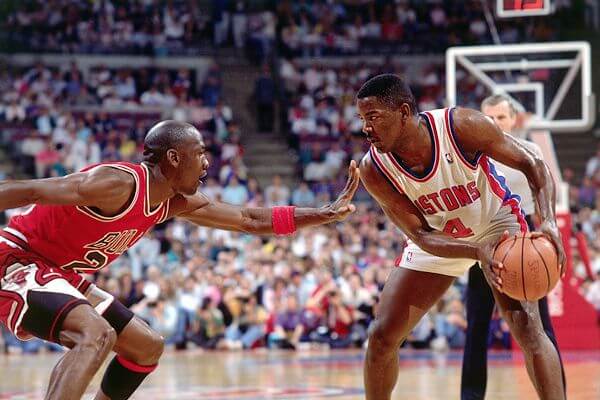 The most jaw-dropping moments came when discussing winning.

When Kenny called me saying these exact words, "You have to see this interview and hear what Michael Jordan said. You won't believe it," I figured there'd be some sort of exaggeration. Then I actually heard the quote for myself. Earlier, Jordan had said winning motivated him more than anything. To prove those who said he couldn't wrong (those old heads I was telling you about). To prove to himself. To prove to Isiah and the Pistons his Bulls were tired of being second best. And most important, to bring a championship home to a city that had never seen one. Riley knew that Mike knew the opportunity to compete for a championship wasn't guaranteed. Towards the end, Pat tossed Mike an ominous question, but one that begged to be asked. Would he consider his career tarnished if he never won a ring? The answer is still enough to move you to tears.

"I would be disappointed that I never won, but my career would never, ever be disappointing because of the success I've gone through, with the friends I've met, the experiences I've been through. The game would still be as fun and as remembered for me even if I never win a world championship. I would much rather win. But if I don't, I'm not going to look back at my career and say it was tarnished because I never won a world championship."

Looking at the game today, everything is compared on a winning scale against Michael Jordan. He's the reason Kobe Bryant obsesses about adding one more ring to his mantle. He's the reason LeBron James finds himself amongst critics in the middle of being one of the all-time iconic players or one of the biggest letdowns. Michael is the reason the world will turn on Kevin Durant in a few seasons and ask where his championship hardware is if the Thunder fail to ascend to the game's mountaintop. Fair or unfair, he remains the ultimate litmus test.

Yet, even some 20 years later, hearing Mike contemplate leaving the game of basketball without ever becoming world champion is amazing. It's like hearing Jay-Z's admission in "This Can't Be Life" where he ponders, "Everybody doing them, I'm still scratching on block/Like damn, I'ma be a failure/Surrounded by thugs, drugs and drug paraphernalia." Michael's perception and pursuit of the game's highest honor elevated championships from a competitive luxury  to what's now viewed as the say all, end all, be all to a player's career in determining where his place in history settles. Think about how much differently the '90's would have been if those words came true and Mike retired with no rings. Childhoods, history books, highlight packages; they'd all be altered to a point I'm not even sure anyone could truly fathom.

We're aware of all the rest though. Jordan and the Bulls would go on to beat the Lakers. From there, the dynasty as we know it was born. Phil Jackson became known as the greatest coach of his generation. Scottie Pippen grew into the best on-ball defender ever. John Paxson and Steve Kerr crafted their place in history with timely shots. And later, Dennis Rodman's antics would only be out-shadowed by his play on the biggest stages. Again, that's what everyone remembers.

Remember Michael Jordan for being the greatest winner of our lifetime because that's what he is. Just make sure to tell the entire story when you do.