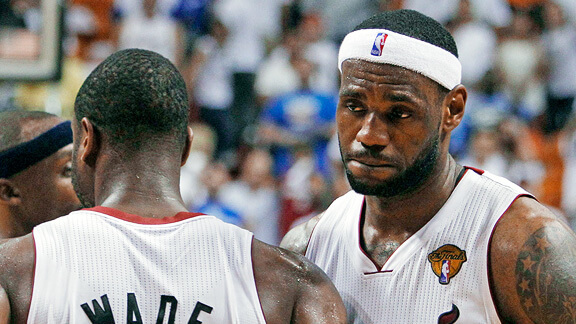 I’ve never met Ethan Sherwood Strauss. I don’t follow him on Twitter, and he doesn’t follow me. But I know who he is, and I’m quite certain he knows who I am.

And since I’m a social media crackhead, if you will, I saw a colleague of Strauss’s – of which we are mutual Twitter followers – tweet a link to story that he wrote on Hoop Speak (a featured blog on ESPN’s True Hoop network) entitled, “Can we accept LeBron James as a choker?”

Immediately the title caught my attention and upon reading, I quickly discovered that the piece was extremely sympathetic towards LeBron, because he has come up short on so many occasions and has been trashed for it as a result.

“Can anybody be sympathetic to LeBron James for choking? The world seems divided between those who frame James as “choker” so as to bash him, and those who seek a less loaded, more analytical explanation for recent playoff flameouts. What I don’t hear is: “LeBron James is a choker because he wants to win so badly. We should feel sympathy for him.” Granted, many feel that he is undeserving of sympathy, but it should be possible to find humanity in his failure.”

I just threw up in my mouth a little.

What is this, teaching a kid how to ride a bike without training wheels for the first time and picking him up and kissing his scraped up knees and elbows every time he falls? Please…

Mr. Strauss goes on to theorize that fear of failure comes with desperately wanting success and, to that point, I take no issue, because it’s true. It’s like wanting to ask the cheerleading captain to the prom, but you’re a nerd sporting a pocket protector, and you know there’s no way she’d be caught dead with you in public so, at the risk of being shot down, you don’t bother to ask her at all. Fail.

So given that, why should any of us feel sorry for him when he fails?

Does he feel sorry for the parents who have to shell out almost $200, because their son just has to have his latest sigs? No.

Does he feel sorry for the fans in Miami and Cleveland who had to pay jacked-up ticket prices just to watch him come up short again and again? No.

Does he feel sorry for those people who might feel let down because they bought into the, “Not one… Not two… Not three…” crap he spouted off at the pre-championship celebration on South Beach? No.

So allow me to summarize that it is because of these things, and many others, that LeBron James deserves no sympathy for his failings and he deserves every snide comment, mean joke and choker label thrown his way. Why? Because he makes millions of dollars in endorsements, millions more playing basketball in the No Boys Allowed League, and it comes with the territory of being labeled as “great.”

He’s been marketed, packaged and sold as the best thing to happen to the game since Dr. Naismith thought it was a good idea to cut a hole in the bottom of the peach basket to speed the game up.

You want a “less loaded and analytical explanation” for why LeBron James fails so often? Try this one: mental toughness.

So while I respect your opinion Mr. Strauss, and I appreciate the time that you took to sit down and write it all out for us… I’m just not buying the LeBron James as a sympathetic figure bit; not at all.

We shouldn’t accept LeBron James as a choker because that’s a lame, defeatist and enabling attitude. It also ain’t gangsta.

And should LeBron James ever win a ring, he should pull a Derek Jeter and send all of the sympathetic bloggers and writers who have made excuses for him year-after-year a limo with a gift basket containing a signed jersey that reads, “Thanks for your support.”

You guys should get something of value for all the time you’ve spent defending him.

And don’t worry about me. I’m fine with walking.

7 Replies to “No Sympathy For Bron-Bron”