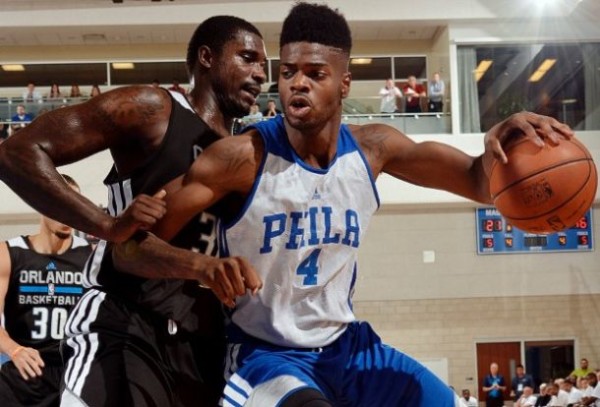 For reasons that I've never been able to explain, I've always had a vested interest in the story of Nerlens Noel. It's most likely because his career as a professional basketball player has mirrored my own as a writer — not necessarily in the same level of success, but more so in the path that our journeys have taken.

Having followed his recovery from an ACL injury that's kept him sidelined since February 2013, I related to the frustrations that he would often voice. By his own accord, he was ready to return to the court for months, but people in higher positions deemed that as premature. In my experience, there isn't anything more frustrating than being told that you're not ready for something. Whether the scenario is professional or personal, having someone dictate your situation for you is never a good feeling, whether it is the right decision or not. In the case of Noel, being told that while your team is in the midst of a 63-loss season has to be almost unbearable.

That's why when it was announced that Noel would be competing for the Philadelphia 76ers in their first Summer League game this past weekend, I made it a priority to clear my schedule for that two-hour stretch. As a hoops enthusiast, I've followed him since his senior year of high school, trying to find out as much as I could about the near 7-foot prodigy balling out of control in Massachusetts. Coincidentally, one of the first stories I ever wrote for a site that's now defunct happened to be about Noel committing to play for Kentucky. His early steps into his basketball journey were only just beginning at that time, a parallel to my own writing ambitions.

Fast-forward to the 2013 NBA Draft that resulted in Noel being traded from the New Orleans Pelicans to the Sixers. He was just a few months removed from that ACL injury that effectively ended his one-and-done campaign at Kentucky, an injury that also diminished his draft value. As a Philadelphia native, the fan in me was excited, but the feeling was bittersweet. Being able to watch Noel play at the professional level would be great, except it would take more than a year for it to happen.

The Sixers were in the midst of a tanking campaign that made games painful to watch, and just having Noel on the court would have been something to look forward to. He repeatedly mentioned that he could play only for coach Brett Brown or GM Sam Hinkie to dismiss the thought. Noel even took it upon himself to declare the day that he intended to make his NBA debut.

Keeping their prized asset secured on the bench was done with Noel's best interests in mind, even if it didn't seem that way at the time. The Sixers are in the pivotal stages of a franchise rebuild, and a healthy Noel seems to be an important part of that process. They could have easily thrown him into the fire and left his fortunes up to fate. Many of us at his age would have wanted the opportunity to do just that, and some of us have learned the hard way how bad that can turn out. Eagerness can blind you from your actual limitations, and in the case of Noel, his time as a spectator was spent honing his craft. He worked on the fundamentals of his game, added necessary muscle to his slender frame and expanded his shooting repertoire. Not being able to showcase your progression can seem redundant, but the repetition of mastering your skill is the ultimate payoff.

After an entire season that must have felt like a lifetime passed him by, Noel was finally given the green light to show his worth. How did he perform? Better than I would have imagined.

Yes, it was just a Summer League game comprising players that may not ever see an actual NBA roster. But it was still the first game back for a 20-year-old player who hasn't played a competitive game in about 18 months. Never mind the fact that he racked up 19 points, 4 steals and 3 assists as a guy whom critics believe is only relevant on the defensive end. It doesn't matter whom he was playing against; it's the way that he played that impressed me the most. Everything from his awareness on the court to the way that he now shoots free throws has been refined for the better.

The fact that he was held out of the second game showed that while his coaches acknowledge that he's ready, they're not going to force too much on him. Not playing in back-to-back games during the regular season looks like the approach they may take with Noel in his much delayed "Year 1." Again, he'll be forced to adhere to orders that he may not he necessarily agree with, but knowing that it's for his own good should keep him at ease this season.

He's closer to seeing his dream of being a professional basketball player come full circle, and like anything else in life, it's the anticipation that nerves you. As someone in a similar position from a professional standpoint, I can certainly sympathize. Knowing you're close but still accepting that there are still hurdles to get over is a frustrating feeling, but each sign of progression eases it a little at a time. That alone makes the journey worth it, a journey that Nerlens Noel is really just beginning.

One Reply to “On Nerlens Noel And A Dream Deferred”