Take a look at the roster of this season's Phoenix Suns. 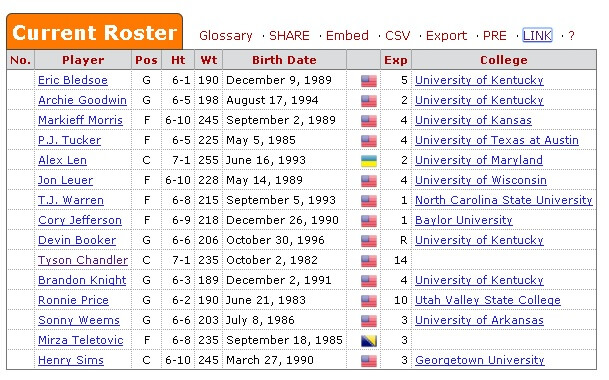 Three things should leap out at you:

So Devin Booker wasn't even five years old yet when Chandler was drafted out of Dominguez High School back in 2001. In fact, outside of Chandler and Ronnie Price, no other player on the Suns has played more than five seasons in the NBA.

You knew that Suns management was committed to getting younger (and thriftier), but in doing so, one can argue that they sacrificed those hackneyed, yet important intangibles like accountability and leadership. It's why you can have the Morris twins displaying unhappiness or failed plans like the Eric Bledsoe/Goran Dragic/Isaiah Thomas scoring point guard trio.

You can also just fall apart defensively as trying to outrun every opponent just drains on even the most spry and youngest of players over an 82-game haul. The Suns made sure they would be heard in free agency in hopes of bringing in a strong veteran presence, but Phoenix didn't seem like the ideal free agent destination for the biggest names in the field because perhaps they were too young and disjointed.

Which is probably why signing Tyson Chandler was as smart as it was stunning. Smart because the twice-former Dallas Maverick was still incredibly effective in his return to the team where he won his lone NBA title. Stunning because they've committed multiple years to a player who has many, many miles on his tires.

When the team drafted Alex Len in 2013, there was the hope that he would somehow meld into the franchise center; a presence in the paint on both sides of the court because of his size and length. Yet, due to sharing playing time with many other young players who needed minutes in order to grow, Len hadn't been developing as quickly as hoped alongside other young bigs like the Morris twins and Miles Plumlee.

In signing Chandler to that 4 year, $52 million deal this summer, Phoenix finally decided to provide Len with someone who can be an on-court mentor, if you will. The thing is that said mentor could also inhibit Len's growth because to keep up with Golden State, Los Angeles (Clippers) and the stacked Southwest Division squads, the Suns need something resembling resistance in the paint.

The Suns still want to run and gun, create chaos in transition and keep a high offensive pace, and what they envision is that a healthy Chandler can be the rim protecting catalyst. After back issues - and speculation about his motivation - in his third and final season with New York, he started 75 games last season for the Mavericks, the most since 2007-08 with the former New Orleans Hornets. Yet, Chandler himself didn't solve all of Dallas's defensive issues as the personnel in 2014-15 was worse on that end of the floor than they were in the championship season of 2010-11, which had smart team defenders like Corey Brewer, Shawn Marion and Jason Kidd.

Phoenix was one of those weird middle-of-the-pack teams last year. They were 3rd in the Association in pace, but 11th in scoring and 16th in offensive rating. They were also 26th in points allowed and 19th in defensive rating. With a relatively young roster, the unevenness was to be expected, but in chasing the eighth seed in the Western Conference, the learning curve ended up being a bit steeper and rockier than hoped.

The age question isn't insignificant, however. Chandler just turned 33 earlier this month, which really isn't old at all until you think about the fact that as one of the last prep stars standing, he has played in the NBA since he was 19 years old. He will definitely run with Bledsoe, Brandon Knight and the rest in November and December, but in March and April, he'll need Len and Markief Morris (if the latter isn't eventually traded) to pick up as much slack as possible.

Tyson Chandler has the hardware and reputation of an utmost professional, has the easiest offensive playbook in the game - just lob it over here, homie - and is almost underrated as a rebounder, if not for those now ineffective tap-outs that he made famous with the New York Knicks in 2012. Throw in a little motivation from being turned away by Dallas once again, and you have someone who will refuse to let his teammates slide for mistakes on the floor on most nights.

His game will not change for the Phoenix Suns, nor should it. Yet, will the Suns, like the Mavs and Knicks before them, change because of him? They have four years to find out.