For all anyone knows, we could be quickly approaching the Miami Heat's last season atop the NBA food chain. That's because Chris Bosh, Dwyane Wade and LeBron James can all opt out of their contracts next summer. If, by chance, it is the last run for the currently-constructed Heat, here's what what we're always going to remember them by:

1. That exact moment LeBron uttered the now iconic phrase, "I'm taking my talents to South Beach." And five seconds later, everyone realizing, "If this shit actually works, everyone in the league is screwed." And five seconds after that, LeBron becoming the most vilified athlete since, well, possibly ever.

3. Pat Riley never as once breaking his cool even during the most pressure-packed moments. Pat Riley also luring Ray Allen away Miami's biggest rival, the Boston Celtics.

Their "Harlem Shake" video barely missed the cut. With as many dance crazes that sweep America each year, the chances of LBJ leading yet another impromptu music video are through the roof.

Yet, point five is perhaps the Heat's most intriguing and perplexing intangible. Veteran players have flocked to Miami - pay cuts and all - because of the allure of playing alongside "the big three." Shane Battier absolutely adores LeBron. Before being amnestied, Mike Miller had the greatest gig in the NBA (sit all season, show up big in the playoffs). And Jason Terry, for all the shade he may heave at Miami in the present day, made an open sales pitch to the Heat in 2012 when he said, "No question, they need a veteran shooter, a guy who can score besides LeBron (James) and (Dwyane Wade), and they know they can count on. I’m a guy that’s been in this league 13 years, (averaging) 15 points a night, easy. Off the bench or the starting lineup, it doesn’t matter. So I think I’d be an asset to them.”

The Miami Heat, since 2010, have become the world's most luxurious foster care home. Credit this initiative to having two top 25 players in Bosh and Wade and the unquestioned best in James while employing a steady diet of shooters to make doing so a low-risk/high-reward investment. If they don't pan out, fine. Riley still fields a team talented enough to compete for a championship. If they do, all the better. Since 2011, Pat Riley's reclamation projects include:

LeBron James: Make no mistake, this was one. No one outside of the Heat wanted to be associated with The King following "The Decision." He was pompous, arrogant, self-centered...pretty much all the adjectives used to describe nearly every other superstar in history. The only difference was "trending topics" existed, so it just felt 100x worse. After the 2011 Finals, the shit that had already hit the fan mutated into shit hitting a full-fledged windmill.

Eddy Curry: Considered by all to be one of the most notorious busts of all-time, Eddy was believed to be the center the Heat needed to guide them to a championship. Curry never found consistent playing time, but he won a ring. And for the rest of eternity, you have to acknowledge Eddy Anthony Curry, Jr. as "world champion." Just look at this guy.

Rashard Lewis: He was once one of the NBA's most accurate shooters and was even on that 2009 Magic team that upset LeBron's Cavs in the Eastern Conference finals. Not long after that, he fell into basketball purgatory in Washington thanks to bad legs and and a horrible team. You know, if you include "basketball purgatory" having a phat-ass contract. He played select minutes during his first season in Miami. Like Curry,  however, "world champion" is apart Rashard Quovon Lewis' portfolio.

Chris "Birdman" Andersen: By far the Heat's most successful science experiment to date (if James isn't included). There were drug problems, internet child predator problems (since proven he had no involvement whatsoever in) and there was an image problem. Miami signed Birdman in the midst of the 2012-13 season, went 37-4 in his first 41 games and never looked back. It's safe to say Miami may not have won last season's title without the toughness, confidence and efficiency Christopher Claus "Chris" "Birdman" Andersen brought along with him.

Greg Oden: Signed during the summer of 2013.

It's Oden and Beasley that have basketball fans second-guessing the Heat's decisions. Why take the risk? Why sign Oden when the last time he played was December 5, 2009, ironically same day Nick Saban made Tim Tebow cry in the SEC Championship? Why take a risk (again) on Michael Beasley, especially when weed is super accessible in Miami? They sell it right on South Beach. At least, that's what I heard from some people who know some people. Regardless, but why? What's Pat Riley trying to prove? 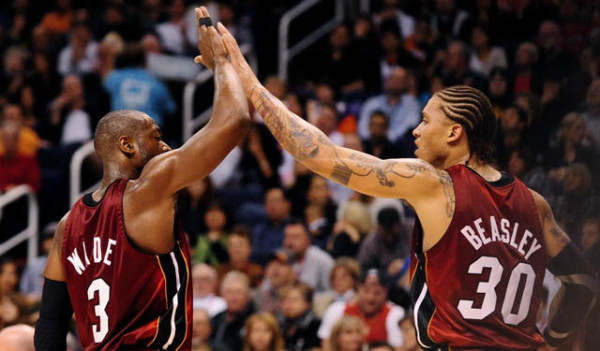 The better question is "why not?" at this point. The narrative behind Oden is simple. He's never going to present a problem to the Heat, attitude-wise. If anything, he's a guy who just wants to fit in, grab rebounds, block a few shots and catch a bounce pass from LeBron or Wade here and there. He'll be the perfect team player. His only challenge is attempting to do something he hasn't been able to complete in a relative sense since his first and only season at Ohio State - stay healthy. If, by chance, Miami lucks up with Oden, that's the one body capable of banging with the likes of Joakim Noah, Tyson Chandler and Roy Hibbert (who looks like a Brinks truck these days). The question is one hell of an unknown, admittedly. But if the Oden experiment doesn't pan out, Miami's left with the same core of big men they had last year and LeBron James. That's better than nothing. That won them a championship.

Beasley, on the other hand, is the more head-scratching of the two. He's signed to a non-guaranteed contract yesterday meaning he'll have to fight for a roster spot come training camp. Talent-wise, one would suspect he's a shoo-in. He'd literally have to roll a blunt up in practice not to make the squad because, remember, there was once a point when the question was should he or Derrick Rose should be the #1 pick in 2008. Everything else not named talent? That's where the issue lies. Beasley's image is horrific, so much so that it's taken a huge blow to what he's able to produce on the court. Somehow, though, he couldn't ask for a better situation. Here's a 24-year-old journeyman known more for his favorite strands of weed than his favorite go-to move on offense, involved last month in his fourth marijuana-related infraction since entering the league five years ago, and he gets a spot on not only the team that drafted him, but the team that's been in the last three Finals.

If Michael Beasley f*cks this up, shipping him back home to D.C. where he's going to be on fries at the McDonald's on New York Avenue for the rest of his life should be the only option. I get it. Saying "Beasley can work IF..." is such an open statement and more of a grasp for hope than anything else. But that's all these reclamation projects are built on at the end of the day - hope. Perhaps Miami sees a 6'9 swingman with ample baggage, but also with all the talent in the world capable of putting up 10-12 points and five or six rebounds in a reserve role. Perhaps Miami is quietly keeping an eye on Tyrann Mathieu in Arizona. The Honey Badger was once seen as (and still is by some) a "can't do right" type of kid who cared more about 4:20 than Cover 2. Now, he's winning over teammates like Larry Fitzgerald and coaches by accepting responsibility for his past and making the necessary changes for his future.

If Beasley is serious about this stop - because like the previous paragraph mentions, this could damn well be his last stop - he's got to make sacrifices to make the team and stay on if he does. Submit to a drug test frequently. Volunteer to attend drug rehab classes. Learn to play within a system for once. At least make it look like you're trying to play defense. Perhaps, most importantly, realize the last thing the Miami Heat need is Michael Beasley. They've got LeBron James (for at least one more season).

What's ironic is Beasley would kill to have Oden's humbleness while Oden would kill to have Beasley's health. When done right, that's what a nurturing foster home dynamic provides for children: the ability to discover the positive in otherwise depressing situations. Give them hope that whatever happened before is now behind them. Convince them the opportunity to still define who they are and what they can accomplish still hinges on them, and them only.

Maybe, just maybe, that's what the Heat are selling in Miami. Telling these players that other franchises and fan bases wouldn't touch with a 50-foot pole the opportunity to embark on the world's greatest "I told you so" mission resides with the team that built its championship pedigree on the same exact logic.  In Year 4 of the NBA's greatest social experiment, and maybe LeBron's last as a resident of the 305, the Heat are going out the same way they came in - with all eyes on them, even more doubt and Pat Riley pushing all his chips to the center of the table.

The greatest risk in life isn't taking one at all.

5 Replies to “The Miami Heat: The World Champion Foster Parents”