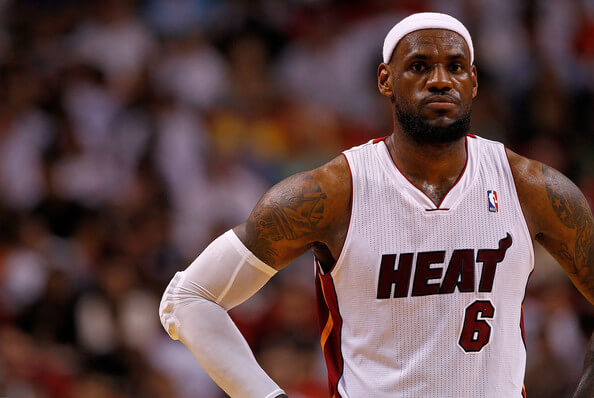 The 2012 NBA playoffs are upon us, and with it comes the controversy, the excitement and the pressure that has built some of the greatest legacies in the league's long history. No one player, possibly ever, finds himself under the microscope like LeBron James. And in the case of TSFJ, our very own LBJ apologist, Justin Tinsley, stands possibly on the edge of one of the greatest postseason runs of all time or the biggest letdown any of us can ever remember. Knowing this, he decided to pen his thoughts before the first dribble got underway. Pressure busts pipes. Pressure also makes diamonds. And diamonds help make rings. So does 16 wins.

Before getting into that sob story, let me first dive into some background info. In the world of social media, a 25/8 media cycle and wondering where Kanye and Kim will show up next, everyone has a voice. And because of that, the line between “analyst” and “fan” is about as hazy as it's ever been. Myself, I’m a sports and music diehard fan. There are people who know more about both sports and music than I do. I have no problem admitting that. Hell, the world would probably be a lot better off if people did instead of everyone thinking they were God’s gift to whatever it is they have a passion in.

Anywho, before I get too far off track, take a trip back in time with me.

June 15, 1998. The morning after Michael Jordan’s last shot in Utah. The morning after M.J. went 15-35 from the floor and needed every drop of his 45 points. The morning after the Chicago Bulls secured their sixth championship in eight seasons, officially cementing them as the team of the decade. Coming in second, ironically, were my Dallas Cowboys. The '90’s were a great time. My teams were winning. My favorite players were icons. And championships were all but taken for granted. It wasn’t a matter of if any of my favorite players/teams would win titles before I graduated high school. Shit, it was many of how many.

Yet, it was also the morning after I realized change was staring me directly in the face. The NBA was on the horizon of an ugly lockout, and the Bulls were entering their rebuilding phase. Jordan retired. Pippen left. Rodman, well, I’m not even sure what Rodman did, but he did “it.” Even Uncle Phil threw up the deuces.

Just like that, everything I knew about the NBA and my childhood were gone.  Even the Cowboys were going 6-10. I could never really call myself a Bulls loyalist. I was a Jordan fan (known as “stans” and other things nowadays). Things looked bleak, and little did I know, it was only the beginning of what would become the most dubious struggle outside of being a Cubs or anything Cleveland-related fan.

Ladies and gents, welcome to the “Tins Championship Drought.” 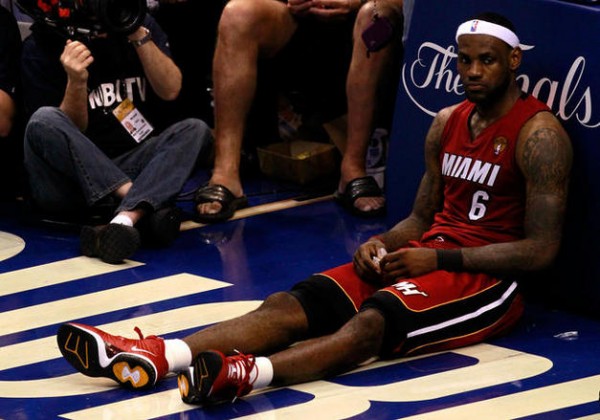 Like I did two decades before, I got too cocky. LeBron James – the one player I championed as the next sports icon back in 2002 – was on the verge of the greatest “I told you so” in sports history. The years in Cleveland were stepping stones for what would take place last June. The man dubbed “The King” - rightfully or not - would ascend to the mountaintop. And he’d do it after the ugliest and most venomous year in sports history.

Following “The Decision,” publicly wanting to see James succeed was like admitting you bathed in Axe body spray and wore FUBU suits to work with Tommy Hilfiger socks. But June 2011 would change it all. LeBron was anointed the most talented player in the league, but also the most overrated by skeptics, critics and almost any other word ending in “-ics.” His late-game blunders came to define his career as much as “The Chosen One” tattoo engraved on his back. Then came his dominance against the frequent thorn in his side, the Boston Celtics. Then came his manhandling of the Bulls in the Eastern Conference Finals.

Everything looked clear. LeBron would end the craziest year in the NBA with the one accomplishment many said he was scared to go out and grab by the neck. He was playing the best ball of his career prior to meeting Dirk Nowitzki and the Dallas Mavericks. It was set in stone. That’s when I reverted back to my days of Jordan and the Bulls and the Cowboys. I took it for granted.

The bottom dropped out in the Finals. There was never a sense of comfort on the game’s highest stage that the icons of the game exhibited in the past. He looked tense. He looked passive. For lack of a better term, he looked scared. Game Four stands as the darkest moment I’ve ever had in sports. The same player Scottie Pippen dubbed as the greatest ever prior to the Finals looked like he didn’t want anything to do with the one object responsible for turning him into the most polarizing figure in sports (a basketball). If I never heard the phrase "eight points" again in life, I could die a happy man.

June 12, 2011, serves as the day Dirk Notwizki, Kenny Masenda and my boy Willie P. saw their Dallas Mavericks stab me right in my heart. LeBron admitted in a recent Sports Illustrated feature by Lee Jenkins the series loss affected him to the extreme that he didn’t leave the house for two weeks. For the record, Magic did the same thing following the 1984 Finals. Seeing as how our financial portfolios differ slightly, finding a proverbial hole to hide in wasn’t afforded to me. I can say this though. I haven’t watched the first highlight from that series since. I refuse, and depending on how this year goes, I never will. 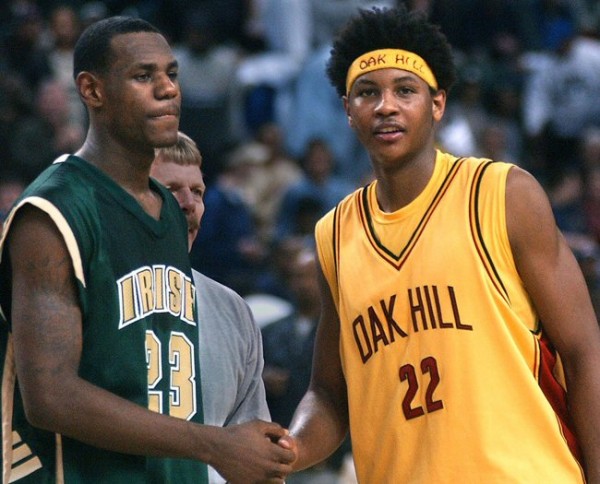 I have been waiting on this postseason for damn near a year now. The lockout was torture, and with each achievement and blunder throughout this abbreviated NBA season, I’ve sat on my hands like a kid looking at the clock on Christmas Eve. As a fan, it’s not much else I can do aside from hope the guy gets 16 wins before anyone else. In such a team sport, it never ceases to amaze me how much this year falls on the shoulders of one person. Not team, but person. Kobe’s got his rings. Dirk has his. Durant is still young. Carmelo completely revamped his image following the downfall of the D’Antoni Empire. D-Rose has been injured all year. D-Wade has his one.

It all falls on the shoulders of one man who guaranteed multiple championships before taking his first dribble in a Heat uniform. The one man Kobe Bryant admitted was the best player in basketball (aside from himself, of course). Whether you’re a LeBron fan or an authentic Miami Heat fan, you’re nervous. We’re all self-conscious. I’m just stupid enough to admit it.

Throughout the course of the past few days, I’ve received tweets, texts and phone calls. Ones saying I should prepare myself for disappointment. Ones saying they hope, for my sanity, everything works itself out. Ones saying they pray every night I end up the same exact way June 12, 2011, left me. None of it really bothers me. I set myself up for this, and win, lose or go into hiding, I can handle whatever the future holds. I'm pretty sure I can. Yeah, I can. This first-round series versus the Knicks will tell a story spanning far beyond the fact Miami swept New York 3-0 in the regular season. I could give a shit about that.

Finally, after nearly a decade, we’ll see LeBron vs. Carmelo – a fairytale crafted from their high school mythical dominance to being selected first and third overall in the 2003 draft. I’m not counting New York out mainly because I know two things are for certain. One, the Knicks are talented and can shoot themselves directly into  an upset (and also a sweep if YOLO-mode from J.R. Smith and Melo implodes in their face). And two, Miami can get complacent.

Ultimately, Miami will win the series. Why? Because the rain of insults falling from the heavens if they don’t may force me to flee the country and/or join the cult Martin joined once he lost his job at the radio station. From there, Indiana (because there’s no way they lose to a team with a Big Baby as their center, right?) will pose a test. And from there, either Boston or Chicago (and my buddy Bryan Crawford) awaits, presumably.

And in the Finals, the only logical opponent stands as the Lakers. If so much is placed on the outcome of the next two months, why not? LeBron vs. Kobe would result in the biggest matchup – name wise – since Magic Johnson took on Michael Jordan in the 1991 NBA Finals. Ironically enough, Magic was vying for his sixth ring while Michael was attempting to discard of the image that he was simply a magnificent statistical phenom in search of his first ring that haunted him with each postseason letdown. Parallels alone, the media and fans would hype this to no end. It would be the only thing on TV. You hear me? The. Only. Thing. 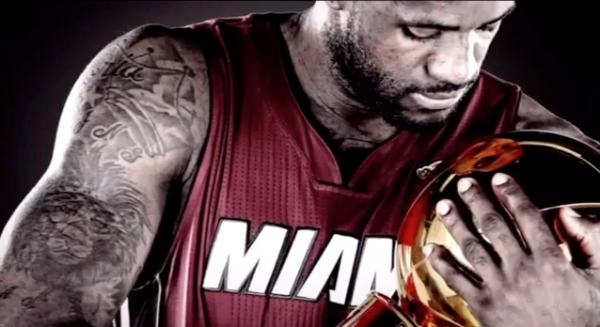 How the next few weeks will pan out, I have not the first clue. No one does, even though some will pray to whatever higher power it is they worship to see James fall flat on his face again. Some, like myself,  however, will convince themselves 2012 is the year in the same way 2011 was, 2010 was and 2009 was. It’s how the universe balances itself.

I just know whatever the hell happens, I’ve got to deal with the outcome. The boasting and the bragging about what may happen once spring arrives are gone. The playoffs are here now. And maybe I’m too invested, which is very, very possible.

2012 is the year. It’s the year LeBron removes the weight of the world from his shoulders officially crowning himself as the unquestioned king of the hill. It’s the year the culmination of a whirlwind that started with Game Six of the 2010 Eastern Conference semifinals. It’s the year to remove June 12, 2011, from my memory bank.

“My ultimate goal is to win an NBA championship. It’s all that matters. I dream about it all the time, how it would feel. It would be amazing,” says LeBron.

This will be the only article I write in-depth in relation to LBJ this postseason. I’ll be too nervous, too excited and hopefully not too frustrated to craft anything else. 2012 is the year. It has to be. I’ve had one June 12, 2011, in my life. And that’s already one too many.

6 Replies to “LeBron James And The Return Of Forever”