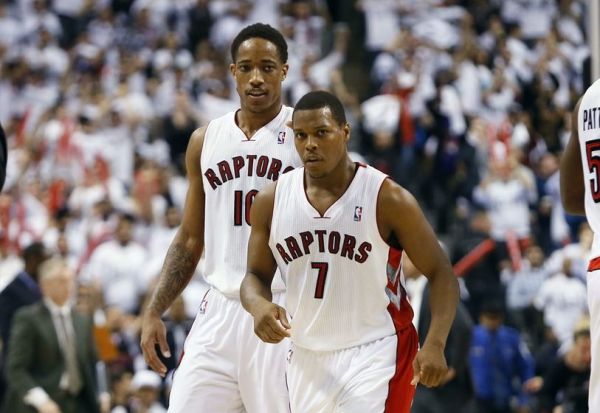 When Bradley Beal stated that he and John Wall were the best backcourt in the NBA, it sparked a healthy debate bigger than the All-Stars boast. He has received at least one challenger to that claim in Dion Waiters, but really the conversation isn’t limited to just the Wizards and the Cavaliers. The back-and-forth banter between the respective parties has been fun to track and should make for some competitive matchups throughout the season, but the next chapter of their respective rivalry won’t make their claims more or less valid.

If there is indeed a case to be made for the NBA’s “best backcourt,” then DeMar DeRozan and Kyle Lowry have a legitimate claim to that title.

Last season the Toronto Raptors emerged as one of the surprise teams not only in the Eastern Conference, but the NBA period. Their 48-win season was achieved largely due to the contributions of Lowry and DeRozan, and as training camps have started around the NBA, it's time to properly acknowledge the backcourt of the north.

The discussion around what team possesses the best duo of guards has pretty much revolved around Stephen Curry/Klay Thompson (Golden State), Wall/Beal (Washington), Goran Dragic/Eric Bledsoe (Phoenix), and Waiters/Kyrie Irving (Cleveland). Keep in mind there isn’t any reason to insert Waiters/Irving into the conversation, but for the sake of this topic we’ll consider it. With that said, every one of these backcourts is formidable in its own right, but it's crazy to think that Toronto isn’t getting the recognition it earned after its playoff-clinching season last year.

Part of that reasoning can be chalked up to the fact that Lowry and DeRozan play for the team that’s north of the border. The NBA has always had a major market bias, which is often overshadowed by its major star marketing. That means if the team lacks one of the elite superstars or isn’t located in a place like New York, Los Angeles or any city LeBron has relocated to, then it's likely the team will frequently fall under the radar. It also didn’t help that up until last season Lowry and DeRozan had both largely been seen as underachieving guards simply going through the motions. Despite being capable players in their own right, there really was no reason to believe that they would amount to much together.

That is why they should not be ignored when discussing the NBA landscape moving forward. They took limited, possibly nonexistent expectations and inserted themselves into any and all claims for the backcourt throne with their play last season.

To get an idea of just how good they were together, Lowry and DeRozan combined for a PER average of 19.2 with a usage percentage at about 25.4. Without putting too much emphasis on the advanced stats here, let’s just say those numbers are incredibly good.

To see how they measure up against the other top backcourt duos:

Looking at these numbers, the Raptors have every right to insert themselves into this tag team “Game of Thrones.” They match up equally with Golden State, with only Phoenix’s dual point guards with a higher player efficiency rating.

Of course, I’m a firm believer that stats only tell part of the story, and when trying to make a reasonable argument in deeming something as the “best,” you need context as well. That is why I’m taking this objective reasoning, to make a purely subjective statement to say that if Lowry/DeRozan aren’t the best backcourt, they’re certainly damn close.

No, they’re not quite as offensively threatening as a Curry and Thompson, nor are they quite the playmakers as the duo in Phoenix. What the Raptors do have at their disposal is a team that’s resilient enough to push through despite their limitations. This allows the two to focus on their strengths, and that includes forcing teams to play their style of basketball. More than that they both have something to prove.

Lowry is a scrappy floor general who was overlooked in his best season as a pro on a team that exceeded expectations. DeRozan shook off “potential bust” whispers and claimed his first All-Star appearance, while sharpening his game on both ends of the floor. The Raptors as a whole thrived because of their efforts, and those contributions seem to be largely forgotten already.

Whether casual fans and NBA die-hards want to admit it or not, Kyle Lowry and DeMar DeRozan are just as good as any other backcourt they want to debate tirelessly about. While it would be hard to decisively call them the best, that’s because it’s always difficult to declare anything as the “best.” Truthfully, there is no one definite answer, but the NBA is just more fun when there is something to argue about.

When meaningful basketball is once again played at the end of the month, none of this will matter, but it's still worth a lighthearted thought all the same. And when that time does come, you might want to take notice of that talented backcourt north of the border.

2 Replies to “Kings Of The North: Why The Toronto Raptors Have Claim To The NBA's Best Backcourt”