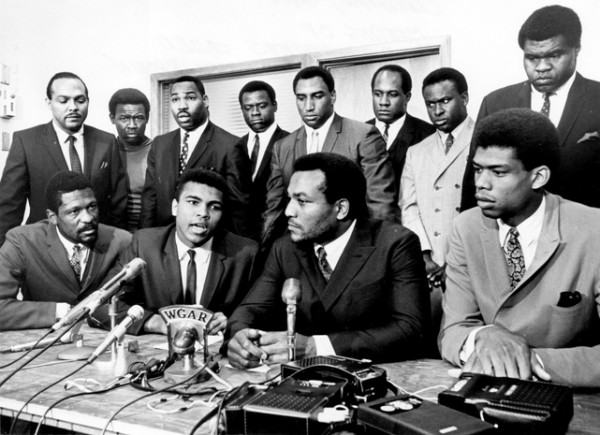 I am not a basketball fan.

Before The Sportsfan Journal collective implodes, allow me to explain.

I’m not a basketball “fan” in that I am not fanatical about the sport.  While I definitely enjoy the game, I am not, by any stretch of the imagination, Dick Vitale.  I believe this is primarily because I can’t hoop.  Yeah, I know.  I’m a black male in America who doesn’t revel in a pick-up basketball game…but my games were (are) football and baseball.  However, if I DO happen to end up on your pick-up squad, you can trust that you’ll get a handful of good hard fouls from the kid.  But I digress.

As I wasn’t losing any sleep waiting for the start of a season that never came, I think that perhaps I viewed the proceedings of the NBA lockout from a different angle than most.  I sarcastically replied on a few blogs and posts that, in my eyes, the NBA lockout is a perfect example of what happens when a bunch of high school grads sit at the bargaining table with individuals who have net-worths of several hundred million dollars.

My tongue-in-cheek comment only really paints part of the picture.  In a league where only a fifth of its players have obtained an undergraduate degree, and 60% of its players are broke within five years of retirement, it’s not hard for me to understand how the players sat at the negotiations table and got crossed-up like they were at the top of the key trying to D up against Allen Iverson, circa 1996.  But let’s go deeper…

Could it be that the disengaged and laissez-faire attitudes of current NBA players shared by many contemporary athletes may have been their undoing?  Businessmen such as NBA owners make it a daily (hourly) practice to view their portfolios and ascertain not only what their present financial situation is, but to speculate on how many variables may impact their bottom-line in the future.  From the beginning, their position was articulate and clear.

The hallmark of many athletes of lore was their ability to reflect on the world around them and their willingness to use their positions to speak out against those things they felt unjust. I can’t help but wonder if a more engaged and well-rounded athlete would have been able to read the proverbial tea leaves and recognize that the world economies crumbling around their ivory towers may eventually come knocking at their doors of their employers and, ultimately, ringing their doorbell as well.

For now, all will be forgotten.  Fans, players and owners have what they want; an NBA season.  They have a ten-year deal in place which also gives either party the option to opt-out after year six.  However, to paraphrase the legendary and loquacious Eugene Edward “Mercury” Morris, "This same situation will not only be in their neighborhood but on their block and ready to knock on the door once again, in very short order."  The only question is this time will players be ready to answer?

11 Replies to “Know the Ledge: What NBA Players SHOULD Have Learned From the Lockout”