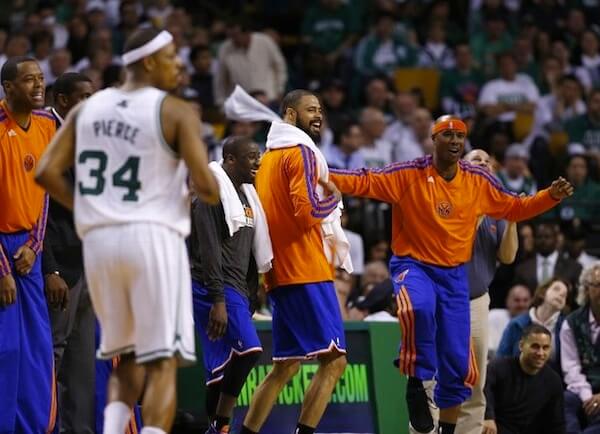 (I began this immediately after Game 6.)

I am a 49ers fan. I watched that team lose painfully in consecutive years, within reach of the Lombardi Trophy. I saw them lose and did not watch a sports broadcast for days. I say all that to say this: I have never felt like this.

For the first time in at least five years, I am fully invested in the New York Knicks' season. I placed expectations on them. Success was less about hope and more about it being a certainty, if all pieces stayed relatively healthy. I even placed a postseason goal on the team with confidence. In short, I embraced the fanatic side of fandom.

(My heart is still racing.)

Atlantic Division champs and dethroning the rival Celtics was a goal that was met. Once it was slated that the Knicks (I almost typed "we") would face them in the first round, I felt a new feeling: excitement. Genuine hypeness came over me. Not only could the Knicks advance for the first time since the beginning of the millennium, but to end the Doc/Pierce/KG era while doing so? Perfect. The word "should" began being tied to my series discussions. For the first time in a while, my team was the better team. I wasn't cheering from a place of hope. I had invested in something that was supposed to succeed. "Knicks in six." With that, however, comes the notion that losing is more than disappointment. Losing is failure.

The first three games, I am ecstatic. Everything is as I said. The Celtics cannot score enough, and we have the best player on the floor. Expectations were being met, and I learned what positive inevitability felt like. Even after Game 4, I was not worried.

And I found myself nervous. Worried. I cared. Things were going wrong when they had been right. I was so distraught that I did not watch much sports from Wednesday night after Game 5 until Friday before Game 6. I feared the unknown, remembered all the previous Knick failures that somehow never shook my loyalty to the team.

Game 6 starts off great. Due to work, I didn't see any live action until halfway through the third. We go up 26 in the fourth, and I'm ready to finally sigh with relief.

Then, the run starts. Twenty straight points in a little under three minutes. I sat in silence so long, my french fries got cold. Deflation in my spirit was so heavy. Eventually, the Knicks hold on to win. The exhale I let out doesn't soothe my (still fast-beating) heart. Placing all my emotion into a team win is something that is so nerve-wrecking. But it is one of the best rides I've been on since I've loved sports.

I love you, New York Knicks.

2 Replies to “The Ebbs And Flows Of Knicks Fandom”