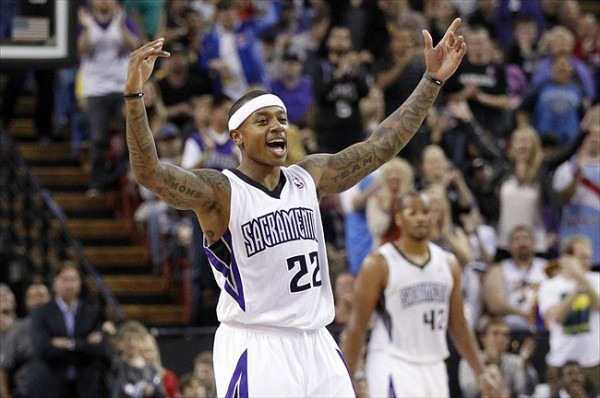 When it was reported that the Toronto Raptors would be trading Rudy Gay to the Sacramento Kings in a deal that involved a handful of players, I admit I got excited. Not because I had any interest that Rudy Gay would suddenly “get it” with this new team, though I certainly wouldn’t count him out. I got excited because Sacramento included Greivis Vasquez in this deal. By moving Vasquez, the point guard reins of the team were left exclusively in the hands of Isaiah Thomas.

There is something to be said about rooting for the underdog and our nature as humans to indulge in this trait. Everyone loves a feel-good story, especially when it centers around someone whose work ethic matches his appeal. We all love to watch someone overcome great odds during the journey to success. In the case of Isaiah Thomas, it’s a narrative that has not only been told, but also continued to repeat itself until now.

To say that Thomas has been slept on is an understatement. One doesn’t receive the “Mr. Irrelevant” title by sweeping the nation right out of the gates. No, after being selected dead last in the 2011 draft, the 5'9" point guard had to prove that he belonged in the NBA. Second-round picks are far from guaranteed a spot on the roster, let alone given the chance to contend for a starting position. Yet that is exactly what he did, and for two seasons Thomas didn’t just prove that he deserved a spot, but he kept it against all odds.

Then came Vasquez, who the Kings acquired during the offseason via trade. At first look, it appeared as if Thomas would get swept under the rug despite his progression last season. Vasquez had just come off a career-best year where he averaged nine assists per game, and at 6'6" he provided the Kings with a point guard that matched up well in size. With Thomas being relegated to an off-the-bench role, the demotion didn’t stop him from being an early candidate for Sixth Man of the Year. As arguably one of the most exciting players in the NBA to watch this season, it’s a shame that with his return to the starting lineup he won’t be able to win that award moving forward.

All things considered, moving forward is exactly what Thomas has done. In the four games since becoming the undisputed starter he has averaged 22.6 points, complimented by 6.6 assists, while playing about 39 minutes a night. The Kings have proved that if nothing else, they believe Thomas isn’t just a rotation player, but a vital piece in the future of this franchise alongside DeMarcus Cousins.

Looking at the remainder of the season, if one were to take a guess it doesn’t look like the playoffs are likely for the Kings. However, with the addition of Rudy Gay, the progression of Ben McLemore and the ever-growing monster that is Boogie Cousins evolving into the beast we’ve waited for, this Kings team is now a must-watch on League Pass. The beauty of it all is that it will be run by the one who wasn’t expected to last this long. Isaiah Thomas is not only essential to this team, but the player formerly known as “Mr. Irrelevant” will be putting the entire NBA on notice if he hasn’t already. All Hail this King.

4 Replies to “This King Shall Rise: The Arrival Of Isaiah Thomas”