Seizing power can be a beautiful thing. Once it's attained by the person who clamors for it, it can lift that person's abilities as far as anything we could quantify on our own. In basketball, we've seen the clash for power take place between owners, coaches and players, and the end result has broken some teams, while others have flourished because of the change.

Of course, when the issue is skewed slightly when the question is asked, "Who is the best player on the team?" There seems to be an instant reaction from anyone who knows anything about said team to immediately be able to name the best player.

Oklahoma City? It's Kevin Durant. Without question, it's KD. Of course, when you watch the Thunder play, if you didn't know anything about basketball, you could step back and think that kid who wears #0 is the best player on the floor. Russell Westbrook. He shoots just as much (if not more at times) than Durant, he has the ball more than Durant and it seems that there are moments where Westbrook (either by direction or by sheer choice) decides to try and make big plays and crucial moments of the game.

Whatever, right? I mean...have you seen the Oklahoma City Thunder's record this year? They're 16-3, and they have the best record in the NBA. They're the youngest team in the NBA, and they were one series away from playing in the NBA Finals. It's tough to complain about things when the wave is so high.

So when Kevin Durant asked the Matt Steinmetz of Comcast SportsNet the following, you damn right it struck an chord with me:

Naturally, I was defensive and told Durant that’s not what I was talking about on television.

“I know,” he said. “But you’re in the media, so maybe you know why some writers and guys like that do it. I just don’t get it.”

“I mean, we’re on the same team, Russell and me, so what does it matter?” Durant said. “Who cares whether he’s better than me or I’m better than him?”

“Well, you know, the media does that kind of stuff every once in a while,” I said, unabashedly throwing my media brethren under the bus. “You know, it happens here some with Monta Ellis and Stephen Curry.”

“Thanks,” Durant said. “It’s just that we’re on the same team, you now? So it doesn’t matter. Who cares?”

With that, Durant thanked me one more time and, while walking away, said ... “I just have a lot of questions, that’s all.”

Even Kevin Durant asks the question that doesn't really need an answer. The style of play that the Thunder execute from can cause many people to question what's really going on in OKC. The fact of the matter is this: They win. Sometimes, it's Durant. Sometimes, it's Westbrook. Hell, it could even be Harden, Ibaka or Perk on a given night, but the bill of goods that the Thunder brass have sold us is that it doesn't matter who's putting the team on their back, as long as they're winning. 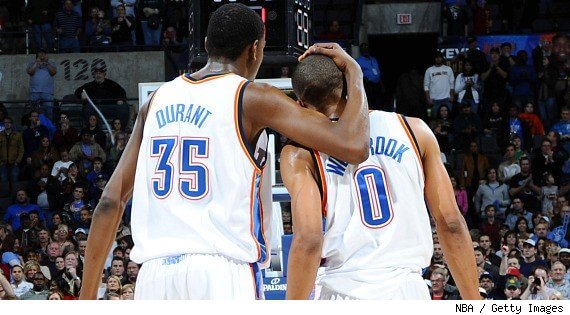 Would Kobe care if Andrew Bynum took over the lead role as the best player on the floor, leading the Lakers back to prominence (taking their city back in the process) and making them title contenders again? What about LeBron and D-Wade, D-Wade and LeBron? A title is a title and, in this league, it's the ultimate validator.

...I'll just be hoping and praying for another Thunder victory.

10 Replies to “Kevin Durant Doesn't Care Who The Best Player On The Team Is, So Should We?”