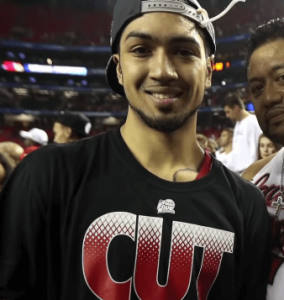 First off, congratulations to the Louisville men’s team for winning a very entertaining men’s championship game. I don’t watch much college basketball and I didn’t have high hopes for the championship either. I was pleasantly surprised by the quality of hooping I watched on television and even found myself rooting a bit for the Cardinals to pull it off. Them being future ACC’ers and whatnot. After the game was over Peyton Siva, who had his hands all over the game, was on television celebrating this great achievement. Unfortunately for Siva, something far more nefarious was ruining his moment in the sun.

That nefarious moment would be Jenna Shea.

Jenna Shea is an escort. Men pay for her “time” and her time likely includes her using her body to earn a paycheck. I’m not with the moral police. Whatever she wants to do with her time and body is her own business. Apparently, she gave both to Peyton Siva and apparently there was some sort of mixup with the payment. That mixup with payment ended with Shea blasting Siva online for his extracurricular activities. To make matters worse, Siva has a girlfriend (whom he shouted out after he won the title) and I’m sure she’s been made aware of this situation.

I don’t have any personal experience the purchasing of sex, but according to a few life tenets I’ve picked up via rap music and movies, what Shea did was unacceptable. Firstly, if she’s upset with Siva because he hadn’t paid her yet, that’s her mistake. If you’re in the business of trading sex for money, I’m going to assume you’d probably want to receive the money up front. If Siva got over on Shea because of her lack of business sense, she should’ve held herself accountable for that.  It’s easy to say, “Siva was fucking a prostitute and he shouldn’t have expected her to keep her mouth closed” but you’d be mistaken. The business of escorting thrives in discretion. In a world where you can pay anywhere from $200 - $1500 an hour for “time spent” part of the reason you’re paying this much, is secrecy. Shea violated that because, well, she’s a terrible businesswoman.

Secondly, Shea tweeted she didn’t know Siva had a girlfriend, which is why she sticks to money and not dating. You see, I could buy that argument if Siva was selling this silly ass girl a dream about them being together. But from the way she explained it, it was a strictly cash for sex transaction. Last time I checked, personal relationships don’t have a damn thing to do with that business. The fact Shea pulled a Tony Romo move launched this man’s business into triple coverage deserves is pretty damn despicable on her part. It’s like yo...what does Siva having a girlfriend have to do with the fact you get paid to smash? If escorts required clients to be single before giving up all of their “time” I’m positive that entire industry would fall flat on it’s goddamned face.

Stupid as Jenna Shea is, Siva has his share of blame to handle as well. From his perspective, I’m assuming he was thinking “if I pay this girl to have sex with me, I won’t have to worry about it coming back.” And I mean, that’s a pretty realistic thought. You know, being discretion is a standard tenet in the business of escorting. Where Siva failed is...Jenna Shea has a history of pulling this kind of shit on people. While I completely understand what his thought process may have been, he probably should have erred on the side of caution. Also, this would have never been an issue if he’d never messed with her in the first place.

In the end though, since Jenna Shea is the one who cried foul, I’m inclined to make this about her. What she pulled was some absolute bullshit. There really wasn’t a reason on her part for her to jump on Twitter and air out that young man for any reason. It’s even more ridiculous she pulled that on what homie may feel is the greatest night of his basketball career. Twitter has given way to alot of ugly behavior, none more ugly than the violation of discretion. The advent and popularity of social networks have given way to far too many people searching for 15 minutes of fame...usually at the expense of other people. What Jenna Shea did was mad weak and I really can’t co-sign that type of behavior.

Personally, I hope she never makes a dollar as an escort and has to get a job waiting tables.