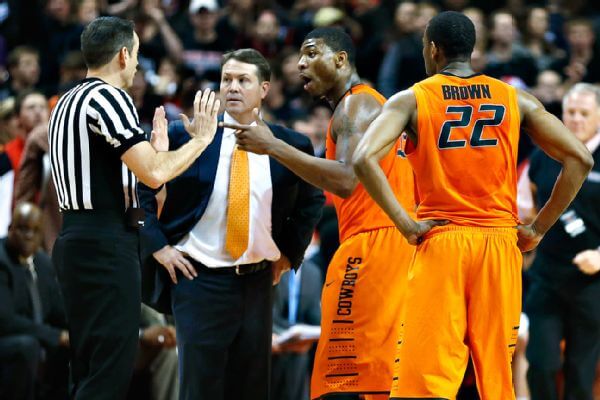 Over the next week there’s going to be a litany of articles written to address Marcus Smart’s antics at the end of the Oklahoma State vs. Texas Tech game on Saturday. Most will likely be some variation of the following themes:

1) Smart shouldn’t have gone into the stands.
2) Smart should’ve been, well, smarter.
3) Jeff Orr was wrong, but Smart was even more wrong because he had more to lose and should’ve just walked away.

All valid points. I’m willing to bet most of the people writing articles on this particular subject happen to be white men. There’s a reason why that matters, but we’ll hold off on that for a moment.

Recently, I read an excellent essay by D. Tafakari discussing Justin Bieber, Trayvon Martin and the politics of being “just a kid” in America. The piece is a fantastic look at how race plays into labeling teenagers as either children or adults by juxtaposing the characterization of Justin Bieber to Trayvon Martin (among others). One quote Tafakari wrote leaped off the page when I began to think about how Smart was being portrayed in the media.

Tafakari, in referencing the treatment of someone like Justin Bieber (who gets the privilege of being referred to as a kid) and Trayvon Martin (who folks were quick to reference as an adult male, despite him being 17), says, “more and more, the national definition is shifting from violent criminal to young black male. Not only are they guilty before being proven innocent, young black men are denied the benefit ever having been innocents.” There’s a reason why I made a comparison between how Bieber is viewed in the media and how it wildly differs from Marcus Smart, but we’ll hold off on that for a moment.

Jeff Orr, the catalyst for all of this, has been lightly slapped on the wrists for his participation in Saturday’s activities. While there was speculation from some that Orr might’ve called Smart a nigger, there isn’t any verifiable proof. Orr himself admits that he said something “he shouldn’t have said,” but he’s denying whatever he said was racial. He also admitted to calling Smart “a piece of crap,” but I’m not sure I can buy that. I don’t like to speculate, but I seriously doubt Smart would risk his career to approach Orr in the stands for such a relatively mild insult.

While it’s already been determined Orr has a prior history of harassing other players, Orr said his latest actions had crossed the line and he has volunteered to not attend any more Tech games for the rest of the year. Strangely enough, while Smart was suspended by the Big 12 for three games, Orr has not been punished by the Big 12 or Texas Tech. (Ed's Note: Orr stated publicly that he would not attend any more Texas Tech basketball games for the remainder of the season.) There’s a reason why Orr hasn’t been punished and why he likely won’t be punished, but we’ll hold off on that for a moment.

Fans And Freedoms Of Speech

When Smart’s actions hit social media, players weighed in. Many have stated they’ve had racial epithets hurled at them during games and learned to ignore them. While many seem to believe Smart was wrong for his actions, they’ve also expressed disdain for the way they are and have been treated by fans. Basketball is one of the few sports where fans are so close to the action that if a player brushed the sweat off of his face it could land on a fan’s sneaker. With that said, one can only imagine the types of things being yelled at the players in the midst of heated battles. Marcus Smart reacting to the fans and going into the stands brought up many comparisons (no matter how thin the relationship) to the Indiana Pacers taking on the entire city of Auburn Hills. There’s a reason why I’m surprised incidents like Smart’s haven’t happened more often, but we’ll hold off on that for a moment.

The Moment Has Come

See, what many seem to forget is that Smart is in a transitional period. Next month, he will be 20 years old. Some will say, “Being 19 doesn’t mean he should be excused from his behavior.” Interesting. Earlier, I talked about Justin Bieber. In case you haven’t heard, Bieber, who was recently arrested for drunk driving, apparently smoked so much weed on an airplane pilots needed oxygen masks just to fly the plane. In either instance, I don’t remember reading any reports about Bieber being a thug. Many have sympathized with Bieber, pointing out how he’s been under so much pressure they’re surprised he isn’t in more trouble. One can only guess why Smart, dealing with the pressure of trying to lead his team to victory, focusing on the NBA draft, and trying to avoid the pitfalls of being one of the most recognizable faces in NCAA sports, isn’t given the same leeway.

While discussing Orr not being in trouble and why the complexion of the writers covering this story matter, it should be noted this isn’t my idea of race baiting (whatever the hell that means). In much the same way Bieber was given a pass for his actions, the spotlight on Orr is much smaller than the one placed on Smart. Orr is a fully functioning adult, a notorious “superfan,” with a history of abusing players during his attendance and yet he’s seemingly being allowed the privilege of flying under the radar of this mess. Why is Orr’s or the writers’ skin color relevant? It’s all a matter of privilege. Marcus Smart, as Paul Mooney would say, doesn’t have the complexion for protection. If someone were to type in Smart’s name into Google Search, there’d be hundreds of articles pointing directly at Smart for what he did, should and shouldn’t have done. Jeff Orr? One would be lucky to see anything past the second page.

Lastly, given what I’ve read from players on social media, I’m surprised a player going into the stands hasn’t happened more often. America has a perverse relationship with the first amendment right to freedom of speech. For some reason, mainstream America believes freedom of speech frees one from the consequences. Nowhere is this more prevalent than in sports, especially in basketball given the proximity of the players to the fans. Colleges are asking kids (there goes that word again) to come play for their respective schools. Colleges, then, should be doing a much better job of protecting their students from such vitriol. Harsher penalties against fans who go over the line with the insults would be a great start. Moving the crowd further away from the floor would be another. If players have to deal with this type of nonsense every single time they hit the floor, we should be thankful that Smart is the exception, instead of the norm.

6 Replies to “On Jeff Orr, Fan Comments And White Privilege”