Fans of sports pay to see players. They pay, invest time and support teams and sports because of how the best players perform. Most of that time and money is spent with seeing the greats of the games compete and be great. But while we rightfully praise those elite players of that time, we can overtook some players who give us special moments despite not being superstars.

Jamal Crawford has never made an NBA All-Star team. His biggest career accomplishment revolves around winning the Sixth Man of the Year award three times. His most remarkable feat of his record for most four-point play opportunities in basketball history. That was until last Tuesday night.

On April 9th, Crawford scored 51 points against the Dallas Mavericks. This night was special and memorable for a number of reasons. First, Dwyane Wade and Dirk Nowitzki were playing their final home games for their respective franchises. Then, Magic Johnson abruptly stepped down from his position as President of Basketball Operations with the Los Angeles Lakers. There were also two game-winning shots by Portland’s Moe Harkless and Oklahoma City’s Paul George to give the Blazers and Thunder important wins for their playoff seeding.

Lost in all that was Crawford scoring over 50 points — doing so for his fourth different team and at 39, being oldest player to score that much in NBA history.

The man known as “J-Crossover” has been dazzling fans with his handle and shot making since being drafted by the Chicago Bulls in 1999. Two decades later, he still plays the same — hell, he nearly still looks the same — igniting crowds and highlight reels with the way he dribbles.

If the NBA is about its prize fighters and talented prospects, Crawford is a part of the undercard that puts on a show, leaving fans walking away glad to have been there the for the entirety of the program and not just the main event. Light on his feet with his wiry frame, Crawford is a graceful puppeteer, ball on ten separate strings. He dribbles like a funk guitarist, walking up and down improvised notes from bass/baseline to bass/baseline. And we as fans are left chanting, “We want the funk!”

Here’s to you, Jamal Crawford, for an incredible night on April 9th and an amazing career that we certainly should not allow to be forgotten.

ICYMI: Jamal Crawford’s 51 Is Another Moment In A Wonderful Career of Moments 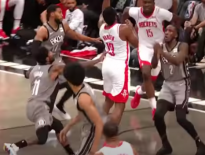 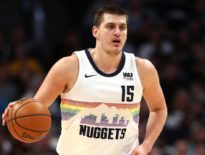 Basketball Back to the NBA Journey, Week 25: The End?
0