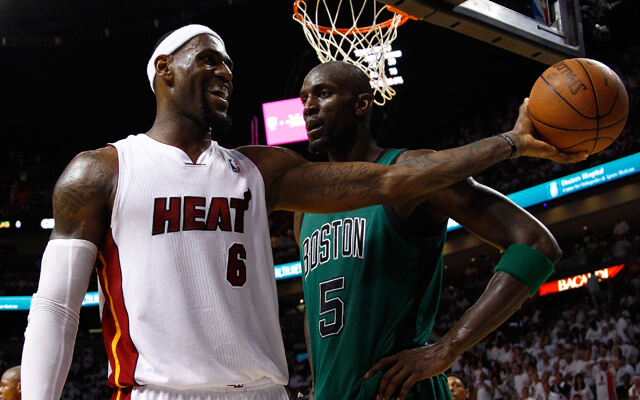 If the sporting world ever needed example of the adage that a picture is worth a thousand words, LeBron James certainly gave it one.

After being fouled on a layup attempt in the waning minutes of the Miami Heat's 93-79 Game One win over the Boston Celtics, James stood. Ball in hand, he raised it next to Celtics forward Kevin Garnett. He held it there and, while laughing, he menacingly spoke.

Not only did James' moment do quite a job summing up the Eastern Conference Finals opener, it also made the storyline of the series clear.

If you want it, come get it.

Not to diminish the accomplishments of the Celtics, but Game One wasn't exactly difficult for the Heat. Despite making just five shots from beyond the arc on 25 attempts, the Heat won by 14.

Despite being tied at halftime, the Heat never trailed.

Despite Garnett playing like the Garnett of old, James and Dwyane Wade were too much.

Miami shot 50 percent from the field and had its way in the second half. At times, they threw routine passes behind-the-back. On two late possessions, James and Wade took turns shaking Garnett and making fall-away bank shots.

It was all too easy for the Heat in Game One, and all too difficult for the weary Celtics.

After going to the brink and winning at home over the Sixers Saturday night, Boston looked tired as the game wore on Monday night.

Perhaps the humidity of South Beach got the best of the green and white. It was either that or Miami's Heat that did.

Without Chris Bosh, the Heat have flourished. After falling behind 1-2 in the semifinals against Indiana, Miami took control and ended the series with three consecutive wins.

Instead of showing rust, they made it look easy when it counted Monday night....again.

For Boston to win in the series, they need everyone at their best. They wasted Garnett's vintage 23-point, 10-rebound performance due to his teammate's struggles.

Saturday's Game Seven hero, Rajon Rondo, was 8-of-20 from the field in Miami with four turnovers opposed to seven assists.

Paul Pierce was 5-of-18 with just 12 points. Ray Allen chipped in six points in 39 minutes. Brandon Bass, who stepped up tremendously in the semis, had eight points and two rebounds.

It was clear that the fight was taken to Boston and they had no recourse in Game One. That can't be the trend for the boys from Beantown. If it is, the series will be over and done with before the first pundit can say, 'Is Doc Rivers going to retire?'

The Celtics will make their adjustments. The adjustments just might work.

But this series and the Eastern Conference is Miami's to lose, no one else's to win.

If Boston finds a way to create some kryptonite for James and Wade, they'll win half the battle. The duo will have to hurt themselves to do the other half for Boston.

Two of the game's best players at the level they've shown recently is just better than the Celtics' best.

With a group of battle-tested veterans, the Celtics will rebound and fight back. They'll claw and do all they can to knock the King off his throne.

If Game One is any indication, it won't be enough.

James wants the Celtics to come and get it. He wants Boston to come and take the East away from him if they dare. But, he doesn't think they can if they try.

And what's more, he's laughing at them.

4 Replies to “Heat Vs. Celtics: Come and Get It, Boston.”