(Editor's Note: Here at The Sports Fan Journal, we're about that sports fan life. As the NBA season turns the page from regular season to post season, we've decided to give a friend of the family, ATLien and HawksBro his own space. Here's Larry Luk.)

Hello! I’m Larry Luk. I’m a member of the #HawksBros, more famously known as the Kia 6th Man Section at Atlanta Hawks games. Being a member of the 6th Man Section means you attend all home games, and you keep your energy up at 100%. I’m a designer at Son&Sons agency here in Atlanta and co-owner of We Are The Process brand, and I spend the rest of my free time nerding out over sneakers and being an ambassador of my favorite basketball team. Ca-caaaaw!

Why #HawksBros? Because of this. You can’t be crucified on Deadspin and not totally embrace the name.

As you probably can tell, the Hawks bandwagon is as full as it has ever been right now. I’m totally cool with that. I say, if you want to be a Hawks fan, then be one. There’s nothing stopping you from enjoying egoless basketball!

TSFJ asked me to offer my perspective after every Hawks home game for the remainder of the regular season and playoffs, so I’ll do my best to get a report submitted in a timely manner. No promises though!

First, the recap. From our friends at Peachtree Hoops:

Another game, another blowout. The Atlanta Hawks trailed exactly once in a lopsided win over the Phoenix Suns on Tuesday night, and the margin was indicative of the uneven nature of the events during a 96-69 victory. Beyond that, the Hawks set a new franchise record for wins with 58, and good times were had all around.

It was a balanced evening for the home team statistically (including a defense that held the opposing team to the absurdly low 69 points, but there were a few standout performers. DeMarre Carroll continued his very strong offensive play from recent days with 16 points (on 8 of 9 shooting) and 6 rebounds, while Mike Muscala produced an outstanding effort, finishing with 16 points, 7 rebounds and 4 steals. Not to be outdone, Jeff Teague (16 points, 4 assists) and Al Horford (14 points, 5 rebounds) produced strong lines, but this one belonged to the Junkyard Dog and "Moose".

It took awhile for the 6th Man (and the rest of the arena) to get into the game. This was home game No. 39 of the season. The Hawks have had the 1-seed in the East locked up for quite some time now, so I could sense some overall impatience and apathy in the building. Everyone is ready for playoffs. The arena finally awoke during a 2nd quarter altercation between Mike “Yung Emoji” Scott and Markieff Morris and was just the spark that was needed to propel the Hawks to a franchise best, 58th win.

Mike “Moose” Muscala tied 2 other Hawks for a game high of 16 points. I give this honor to Moose because he’s showing a lot of promise with the pre-playoff minutes he is getting. Moreover, I was able to practice my moose antler celebration all evening - something I don’t get to do very often. 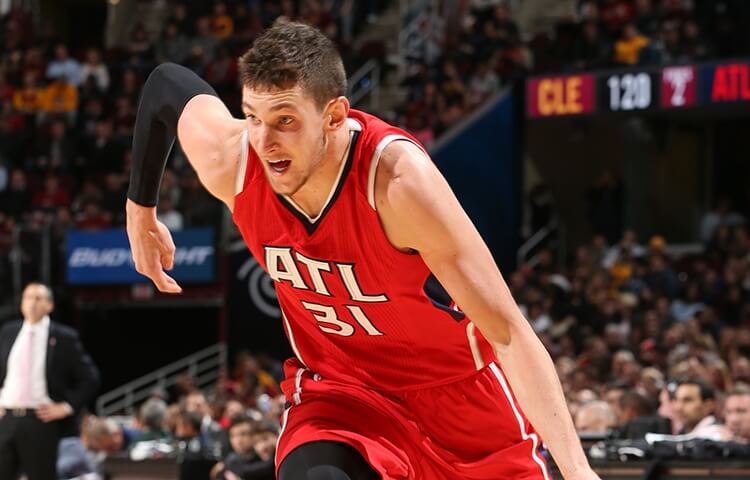 If you’re not familiar with this move, it’s similar to the antler portion of the Texas Rangers’ “Claw & Antler” celebration from 2010. (Also of note, Muscala is about that celebration life.)

During the game tonight, the team honored Ryan Cameron, the Hawks PA announcer for the last 10 years. Many of you also know that Ryan is a radio show personality on V-103 FM here in ATL. Here’s the video tribute they showed during the game. Check me out at the 0:20 mark.

Several new items on the racks today - mostly 2015 Playoff tees. The store also had a heavy re-up on NBA socks in White, Black and Red in all lengths. NBA socks are the best socks! Just ask my dude Troy Murphy.

Thanks for checking out today’s edition of The #HawksBros Journal. I’ll talk at you some more, later.

Be sure to follow Larry on Instagram for all things Atlanta + creative genius. Also, keep up with the HawksBros and We Are The Process on Instagram.