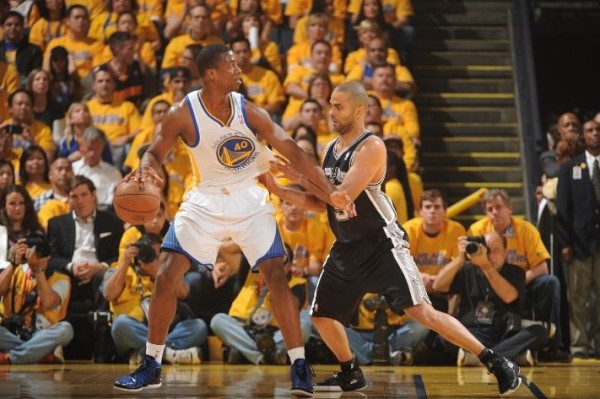 There were times at the University of North Carolina that Harrison Barnes would step up and look like he might be an NBA star. The tail end of his freshman campaign was littered with exciting play and exemplary ability that had us wanting more from the man referred to as the Black Falcon.

Barnes didn't follow up that success in his sophomore campaign. He was mediocre most games at best. We kept waiting for an offensive explosion that never really materialized, and people (including myself) were wondering if Barnes was going to be a bust. You have to admit that he often played rather lethargic when he was on center stage. Nothing about his play made you think that he had another gear on the basketball court in his sophomore season at UNC.

Barnes took advantage of the hype machine that followed him out of high school and was a lottery pick by the Golden State Warriors. I honestly didn't think he would amount to much as a rookie, but I did think that the NBA game would be better for him since he was a versatile wing man with the ability to handle and get his own shot.

Barnes started the year slowly, but under the tutelage of Mark Jackson has found himself the third leg of a dynamic trio of backcourt players who can excite you in so many ways. Each player is unique, and Barnes is the most athletic of the trio.

Since the all-star break, Barnes has picked up his play and become a go-to player for the Warriors. It's really the perfect situation for him because he doesn't have to be the face of the franchise since Stephen Curry already has that title on lock. He also doesn't have to worry about being double teamed since teams are afraid to leave Curry and backcourt teammate Klay Thompson open on the wings. Both Thompson and Curry are lethal, and both can hurt you with or without the ball in their hands.

Barnes now looks like the player we thought he would be back when he first left high school. Many people felt that he would have been the number one draft pick right out of high school, and most of those people had changed their minds after two seasons at the University of North Carolina.

I think it is safe to say that the system at UNC was not really suited for Barnes' ability. It may have been a blessing in disguise for Barnes though, as he had to learn to play without the ball and how to move and play help defense on some pretty good wing players in the ACC.

Jackson made life easy for Barnes though. He didn't ask him to be the Gatorade Player of the Year when he got to the NBA. He asked him to be himself and build on his weaknesses while maintaining his strengths. Barnes has embraced that and stepped his game up to a whole new level.

In the playoffs, Barnes has been instrumental to the success of the Warriors. As teams load up to take away Curry and Thompson, it is crucial for Barnes to maintain an aggressive nature and get key baskets throughout the game. Watching him take flight and use his ability against some proven NBA players is somewhat gratifying, as I honestly didn't know what to expect from the Black Falcon.

It's good to see the maturation of a kid as a player and a person. He looks more like the Harrison Barnes I expected to see now than he did the past two years. Some players' games are tailor made for the NBA, and others are not. I guess I understand why guys can't wait to get there now. The accelerated pace and the intense nature of the league will bring the best out of you if you have the ability to perform at a high level.

The future looks bright for Harrison Barnes. I don't know that he will ever be a franchise player, but right now he looks like a lock to be a good player for a long time.