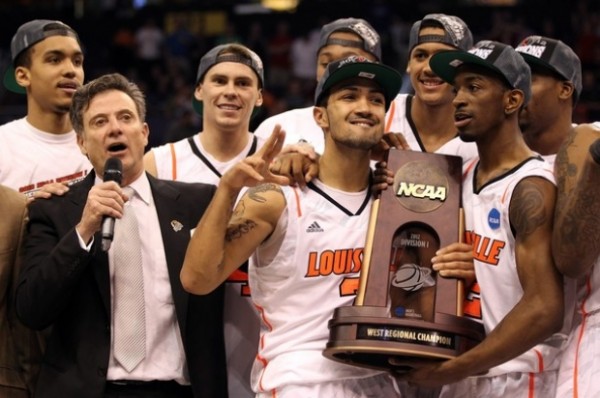 "Don't call it a comeback. I been here for years." -- James Todd Smith

That quote comes courtesy of LL Cool J. Most of you probably know that, and if you don't, you should.

It could also easily come from the mouth of Rick Pitino. How many years has Rick been here? Well, his first trip to the Final Four happened in 1987 when he guided Providence here.

He's been coaching since 1975. He's been to five Final Fours with a combination of three different schools. He rose Kentucky from the ashes, and left them with a championship team.

Recently, he's fallen under the radar, although the exception was an ugly extortion case that got very public recently. Still, it wasn't about basketball. It wasn't about Pitino the coach.

As a coach, there might not be a finer one out there than Mr. Pitino. What will presumably be the last stop in his career is a school that fits him quite well.

Louisville won two titles in the 1980's, yet everyone seems to overlook that little detail. On highlight reels of the 80's titles, Louisville's wins are never shown. Everyone sees Jordan's shot, Keith Smart locking in, Villanova's miracle, and Jimmy V. chasing down anyone he could find.

Not a glimpse of Denny Crum's team in the mix.

At home, the Cards are just as overlooked. Kentucky is big blue, and big blue is Kentucky. No matter how successful the red and black are, they aren't Kentucky.

This season, Louisville slipped under the radar again. Despite winning the Big East Conference Tournament, little was thought of the Cards. They reinvented themselves midseason and never looked back. But, in the Louisville way, they were disregarded and overlooked.

When Pitino was called for a technical foul in the Elite Eight against Florida, his team turned the tables and punched its ticket to the final dance floor. While Rick is a demonstrative coach, he's even moreso a strategist. Although he denied saying anything to the official, he was calculated. Make no mistake, Rick knows his chops.

Twenty years after Christian Laettner scarred Big Blue nation, Pitino waits to do it again, the very same Pitino who watched a gritty team that he rebuilt fall at the hands of a foul-line turnaround jump shot.

As devastating as the blow was at the time, the two parties have prospered since. They did it together in 1996. They'll both try to do it separately on Saturday.

At a school that's overlooked, the strategist bides his time. He knows the chips are on the table and the pressure is squarely on Kentucky.

He knows that his mortal enemy, John Calipari, will try to put the nail in the coffin of what could very well be his last chance at glory.

Before the Cardinals' game with Florida, Louisville looked like the less-talented team. Despite being seeded higher than the Gators, many thought the run would come to an end. They counted Pitino out.

When it was all said and done, Pitino was beaming and telling reporters that Kentucky fans may jump off a bridge if the Cardinals beat them.

Kentucky is the team with the most talent, but would you rather have Pitino or Calipari coaching your team? The coach who can't seem to catch a break, or the coach who's been there in each of the last four decades?

If Pitino beats the Wildcats on Saturday, it may well be his biggest triumph yet.

It will be considered a comeback. Despite all the years.

2 Replies to “Forget Me Not: Rick Pitino and Louisville's Knockout Chance”