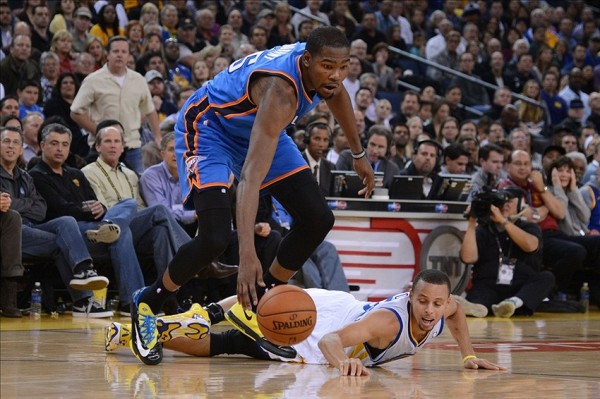 Chicken wings. Beer. Burgers. Franks. Rivalry games. Sunday Night Football. Monday Night Football. If you're like me, a warm, fuzzy feeling just shot down your body. Football season is back, and with it comes six months of planned weekend activities.

But with it being football season, it's also not too early to anticipate the return of basketball. The NBA officially releases its schedule for the upcoming season this week. So in lieu of that, why not list five games already worth circling the calendar and setting the DVR for? I promise they're not all Cleveland Cavaliers games either.

Backstory: Lost in LeBron-mania, Chandler Parsons' exit from H-Town was one of the wilder stories of the offseason.

A. Mark Cuban gave Chandler Parsons $45 million over the next three years in basically a "f*ck you" move to his in-state rival.
B. They signed the offer sheet in the club.
C. Houston didn't match the offer.
D. James Harden said losing Parsons wasn't a big deal because he wasn't James Harden or Dwight Howard.
E. Chandler Parsons' brother didn't agree, calling the All-Star two guard an "entitled bitch."

Prediction: Parsons nor Harden will admit to looking ahead to this game. They'll both give the PR-driven answers of it being "one of 82 games" or whatever cliche media relations answer comes to mind. Both might try and go for 50, though, just to prove a point. And if we're lucky, some verbal sparring, too. Don't rule out Mark Cuban's role as instigator in this either.

Backstory: The Bulls are consistently one of the premier defensive teams season after season. They rebound well. They boast a an embarrassment of riches in big men with Pau Gasol, Joakim Noah, Taj Gibson and highly coveted European star Nikola Mirotic. And they play within their roles. The Bulls boast everything a contender desires except for one vital component. Sans Derrick Rose — who hopefully remains healthy this season — Chicago still doesn't have a perimeter scorer who can create his own shot.

Carmelo Anthony was nearly that guy, but instead opted to remain in New York. The knife wedged in Bulls fans' backs even more once Melo stated his reasons for re-signing with the Knicks was not about the money, but winning.

Prediction: Bryan Crawford runs on the court during pregame warm-ups and gives Melo the tongue lashing of a lifetime.

Backstory: Really, just swap arenas — it doesn't matter. They're the two loudest arenas in the league (with Cleveland likely falling in this conversation this year ... more on that in a bit) and teams that boast three of the most exciting players on the planet in Kevin Durant, Russell Westbrook and Stephen Curry. Seriously, that's all the backstory this needs.

Prediction: Lance Stephenson should definitely become a fan favorite in Washington. And by fan favorite I mean hated.

Prediction: Grown men will openly weep tears of joy opening night. Cleveland sets some sort of sound record the moment LeBron is introduced. Quicken Loans becomes one of the three loudest and hardest arenas to play in, the other two being OKC and Golden State. Basically, it'll be the complete opposite of December 2, 2010. Book it.

16 other noteworthy moments to anticipate

TWO: Andrew Wiggins vs. Jabari Parker ... wherever Wiggins is playing

FOUR: Rajon Rondo potentially getting traded before the deadline

SIX: The Spurs? Remember them? The Spurs' victory in the NBA Finals seems like an eternity ago and was swept under the rug 48 hours after their Game 5 victory over Miami. Well, at some point next season, the Spurs will start a point guard from a country we never knew even played basketball. Why? Because Tony Parker will go down with his annual "injury" for 10 games. Somehow, they'll go 8-2 during the stretch, prompting us all finally accept reality: The Spurs are vampires

EIGHT: Kobe Bryant and Swaggy P.  in the same backcourt

NINE: Boogie Cousins putting up 24-12 per night, only to watch the Kings miss the playoffs again (as a card-carrying member of the Boogie fan club, I'm not happy about this)

THIRTEEN: Also, watching Zach LaVine and potentially Wiggins become one of the most exciting young duos in basketball with chips the size of golden nuggets on their shoulders

3 Replies to “The Waiting Game: 5 NBA Games To Eagerly Anticipate”