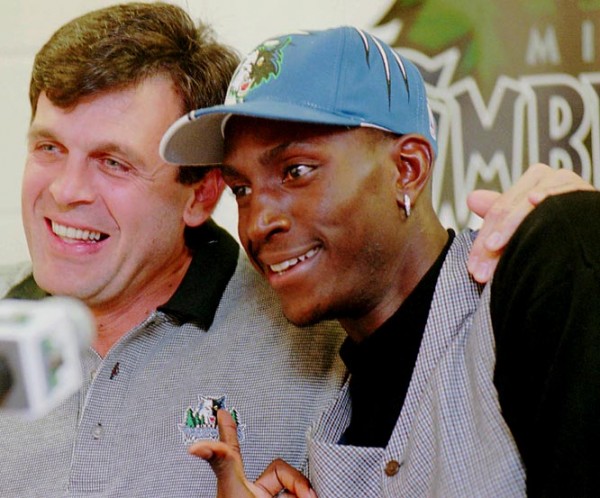 There's an elephant in the room. What is it exactly? Kevin Garnett's career is almost over. This could be his last year. Or he could go on to play two more seasons. Either way, it's something I've come to grips with and realized in three stages. The first is when his game began shifting away from the post into the classic old man mid-range jump shot realm. The second was Game Two of last year's second round match-up against the Heat when LeBron kept going up while KG (it seemed) almost never got off the ground. And third, yesterday. With Garnett not making the Eastern Conference's All-Star reserves, it marks the first time in 14 years he'll be absent from the midseason classic. K.G.'s been just as important to the progression of the NBA post-Jordan (second retirement) as anybody else.

At first, focusing on Kevin's place in history was going to be the theme of what you're reading. Where is he on the list of all-time power forwards? How does he stand against his generation's most comparable foe (Tim Duncan)? Did he stay in Minnesota too long? Nearly a hundred other questions lingered, but none seemed more important than one in particular. How should the man once referred to as "The Big Ticket" ultimately be remembered?

More than his points, rebounds, post-game reaction after the 2008 Finals or the instant classic "bar fight" quote with Craig Sager, Garnett will always be glorified for one moment in my personal rolodex. And that moment happened off the court. In 2005, the Minnesota Timberwolves were coming off a season where they made the Western Conference Finals. KG was the NBA's reigning MVP, thanks to a season that saw him produce a dizzying 24-14-5-2-50% (points-rebounds-assists-blocks-FG%). By the time he sat down John Thompson, however, the bottom had all but caved in, headlined by Flip Saunders' firing, as well as the team crumbling for a variety of issues.

This interview with Thompson told me everything I needed to know about Garnett, the player, and Garnett, the man. It's that powerful. Excluding only Allen Iverson, no superstar in basketball during this time wore emotions on his jersey more than K.G. Lost in translation now, there was once a period when the perception around him permeated questions about his ability to produce when it mattered most and if he would ever spawn into the winner his skills seemingly dictated (the Wolves were eliminated in the first round for seven consecutive seasons begninning in 1996-97). Dealing with the pressure from his own conscience, combined with that of the expectations of being an elite player, the result were tears.

Winning's addictive if, for no other reason, it represents the ultimate high. It's seen on the face of players who reach that level of success. Yet, it's also seen on the face of those who seek their profession's top honor, but fall short. Kevin's tears were much more than him being the overly emotional, attention-hungry player he's often viewed as. They were the reason cries for his departure to leave Minnesota rang loud during the mid-2000's. Not to the extent of witnessing a loved one in pain, K.G. carrying a franchise that appeared hell-bent seeing him climb a mountain no individual has ever reached on their own was gut-wrenching. But he tried. Over and over and over again. You respected his tenacity. You had to, but you also knew in the back of your head that he couldn't do this forever. When was "too late" going to arrive?

In a decade which saw Kobe and Shaq create a legacy of winning and controversy while Tim Duncan solidified himself as the game's greatest four, the lesson Garnett provided basketball moving forward was equally as impactful. His move to Boston afforded him that ring many were beginning to think would never arrive, due to his years in Minnesota. It's his loyalty (almost to a fault) which serves as a small reason why the NBA free agency process is as knee-jerk as it is now. K.G.'s now memorable conversation with LeBron following the Celtics victory over the Cavs in 2010 isn't the sole cause for James deflecting to Miami. His quote, however, spoke volumes.

"Loyalty is something that hurts you at times, because you can't get youth back. I can honestly say that if I could go back and do my situation over, knowing what I know now with this organization, I'd have done it a little sooner."

Granted, the 2010 version of Kevin Garnett couldn't tell the 2005 version of himself this, but with mistakes come the ability to teach. Now am I suggesting Kevin Garnett is responsible for the modern-day Miami Heat, or Carmelo Anthony forcing his way to New York, or Dwight Howard's current vice grip over league headlines? Not exactly. However, every superstar since this interview has seen this clip. And they've all given thought in regards to their current situations and debated how far their own God-given talents could place them in history. At some point, it's bigger than one person.  In his own words, "This ain't golf. This ain't tennis. It ain't about me. It's about us."

The eternal nuisance of being labeled a "loser" haunted him far beyond a three-second call or an offensive foul. It was evident as he admitted to barely sleeping while his voice cracked and eyes remained glossy the entire clip, even tearing up to the point where he could hardly speak on several occasions. With his armor obviously battered, Kevin Garnett's vulnerability never appeared stronger. Too often in sports, we see expectations from a fan perspective. We want. We yell. We kick. We deal with the agony of defeat in our own way. That's just how we're programmed. Dealing with the weight of the team, fanbase, city and world on your shoulders? Just know there are some battles in life impossible to describe...unless you're going through them.

4 Replies to “Fan's Perspective: When Kevin Garnett Realized Winning Was Everything”