Ed’s Note: This article was initially published on November 21st, 2011.

November 19, 2004. I was a freshman at Hampton University and excited out of my mind for two reasons. For one, getting off campus was a badge of honor. Granted, it was a simple 20-minute ride to Norfolk, but the journey felt like something special was bound to happen that night, and little did I know, it would result in a night so violent, yet so amazingly awesome, that I knew there would come a day when I’d get to write about where I was when it happened.

Secondly, and of lesser importance, I was going to attend my first real rap concert.

Prior to heading over to Old Dominion University’s Convocation Center, the people I rode over with stopped by a mutual friend’s apartment to “pre-game.” You know what that means (just let it marinate for a second.) Anyway, the headliner that evening was Fabolous. This was around the time “Breathe” was on every radio station every five minutes and the song, I thought at the time, would propel Loso into that upper echelon of rappers his talent would lead you to suggest he should (i.e. the “Derrick Coleman syndrome.”)

The best act of the evening, though, was Lil Scrappy. Yes, that Lil Scrappy. “Headbussa” was a crowd favorite, but it was “No Problems” which had everyone on the arena’s floor pushing and rapping in unison (ironic, huh?). In fact, he did the song four times in total that evening, and on the fourth time, he let the crowd rap while he rolled a blunt on stage. Crazy stuff; great memories.

Following Scrappy’s performance, I ventured towards the vendors and decided to check my cell phone. There were missed calls and a series of texts reading “turn to ESPN right now!” For whatever reason, we left the concert about 20 minutes later to return to the mutual friend’s apartment. Like any red-blooded American college male, the channel was already on ESPN and SportsCenter was airing.

However, the mood was different. There wasn’t joy and energy; rather, it was replaced by seriousness and physically-primed athletes in stands, battling punch-drunk fans (almost like watching a poodle battle a pit bull.) It took about 30 minutes to see the event in its entirety, but not a word was said. In hindsight, that evening was eerie as all hell. You knew the league was going to be forever altered because of this. Suspensions came, as expected, and the league eventually put ice on this black eye and, for the most part, recovered. Well, at least until the present day.

Ron Artest going on “Mike Tyson: Punchout!” on a fan, whom he believed to have thrown beer on him, is what will most be remembered from the “Malice At The Palace.” And it probably should. It’s the stigma Ron will live with with for the rest of career and thereafter. That being said, there were resulting effects from that night in November, seven years ago; effects that changed the direction of careers, teams and legacies. Here are three:

1. This was all Ben Wallace’s fault — Ok, sure. Artest did what Artest did. Stephen Jackson followed suit. And Jermaine O’Neal landed the best punch of the evening. The Pacers will forever be looked at as the goons (a great case of irony forgotten here seeing as how they were playing the Pistons), but lost in translation is the true perpetrator behind the debauchery. Ben Wallace totally overreacted to Ron’s foul. With the game already decided, it was similar to that guy who results to talking about somebody’s mother after getting tired of all the jokes thrown on him. The Pacers, at this time, were one of the better teams in the East and the Pistons were the reigning champs, so bad blood was evident.

Was it a hard foul? Yes, but get in his face, throw a few curse words back and forth, and walk away. That one shove set off a chain of events still felt to this day. If I’m ever granted with my own radio show/podcast, Ben Wallace has to be one of the first guests. There are questions I need answered. Why react like that? How much time did he honestly invest in practicing free throws? How embarrassing is it to actually air ball one? After the entire fiasco happened, did he feel personally responsible? How did he decide when to braid his hair as opposed to letting the afro rock out? If the roles were reversed, would you fight fans? There’s more, but potential employers may come across this, so we’ll leave it at that.

2. The 2004-2005 Indiana Pacers — Reggie Miller and the movie, Malcolm X, are in the same boat. They’re both disrespected. Reggie should be in the Hall Of Fame while X walked away from the 1992 Academy Awards, empty-handed. Unfortunately for Reggie, he falls in line with so many others from the ’90’s who fell victim to the JPAPJWLAS clause (Jordan, Pippen And Phil Just Won’t Lose A Series.) Also, keep in mind that Reggie’s Pacers only lost by five in Game 7 of the ’98 East Finals to the Bulls in one of MJ and Pippen’s worst shooting performances ever (a combined 15-43.) 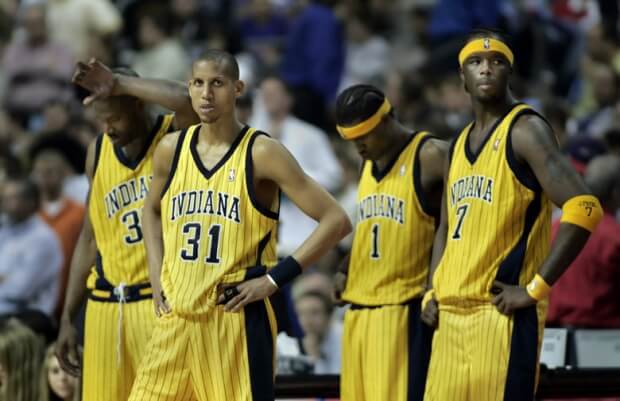 This ’04-’05 Pacers squad was Reggie’s best shot to go out with a ring. At 39, the twilight of a legendary career with the moments to prove such, and with young guns to carry the heavy lifting, the proof was in the pudding. Stats do not tell the entire story, but paint a large picture into the type of set up Miller found himself in.

The numbers for Artest are only through seven games, but an indication of what he could have been. We see him now as the fourth or fifth option on the Lakers and this loony lovable character who can have a great game like once every ten outings. Yet, seven years ago, Artest could get busy on both ends of a basketball court. What Ron-Ron could have meant to the Pacers that year is one of the great mysteries to my basketball life.

Also, keep this fact in the back pocket: even amongst the roller coaster that was the regular season, Indy still went six games with Detroit in the Eastern Conference finals this year.

You mean to tell me a healthy and focused (well, as focused as he can be) Ron Artest doesn’t at least give the Pacers a puncher’s chance to steal two more games? Reggie was always down to take the big shot, so that wasn’t the issue. But given his defensive prowess, sticking Artest on Chauncey Billups, at certain points, doesn’t make sense? Man, listen. Reggie was robbed of his last real chance to walk away a champion. How reality ended up playing itself out was a Finals match-up between the Pistons and Spurs, arguably the two most talented, yet boring teams of the era.

And it’s all because Ben Wallace couldn’t control his temper.

3. I’d go into battle with Stephen Jackson — Basketball enthusiasts love the ’80’s and ’90’s, because of its toughness. You hear it all the time: “The ’90’s were the best era.” Hell, they say it about rap and R&B music, too. In an ethical and moral sense, Stephen Jackson running into the stands was wrong on all aspects. The competitive side of me, however, loved every second of it. This is the type of teammate you want on the floor. He ran after Ron Artest NOT to break things up, but to throw his own punches. No questions asked; simply straight haymakers. You come after my teammate, I’m coming after you. The math isn’t complicated at all.

To be completely honest, he may be the second-most responsible person for the entire fight (peep the way he was egging everything on pre-beer toss.) Every championship team has the one live wire who isn’t all there, but teammates love playing with him. The present-day Celtics have Kevin Garnett. The Mavericks have DeShawn Stevenson. The second three-peat Bulls had Dennis Rodman. The Bad Boys Pistons had The Bad Boys Pistons. There was almost a reference to The Wire, but Jason Whitlock may sue me for copyright infringement, and I can’t afford to pay him and Sallie Mae. The list goes on, though.

Knowing Captain Jack got screwed out of a potential second ring sucks (remember he got one with San Antonio in 2003), as he’s one of my personal favorite players in the league. Why? Because he’s crazier than a New Orleans pimp not making money during Mardi Gras, and that’s about all the reason I need to make such an assertion. The current forecast is now looking he’ll go down as one of this generation’s tough/insane guys. And that’s fine, too, because it leads to the greatest comparison yet. Stephen Jackson is the modern-day Charles Oakley.

I can at least sleep well knowing that.

Related: Because You Want To Know Why Stephen Jackson Choked Out Steve Francis In The Club

14 Replies to “Fan’s Perspective: Remembering “The Malice At The Palace” 10 Years Later”

Fan’s Perspective: Remembering “The Malice At The Palace” 10 Years Later

Basketball You Gotta Pray For Dr. J, Auctions Memorabilia for…

Basketball Do Not Let David J. Stern Fool You
14