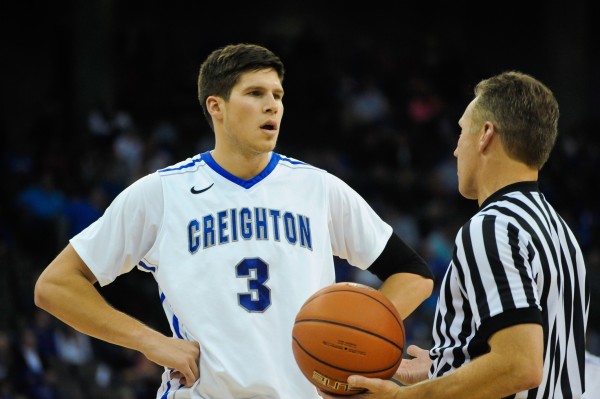 One play stood out in Creighton’s 101-80 blowout of then No. 6-ranked Villanova.

On the right-side of the lane, he caught the ball, dribbled and picked it up. A pivot to the outside moved the defender. The next pivot inside the lane created an easy layup. Somewhere, Kevin McHale likely smiled at the textbook usage of the up-and-under.

The play showed us in a moment what we already knew — Doug McDermott is the best player in men’s college basketball.

He’s the finest player on the court when he plays each game in every arena. All 6-foot-8 of him maneuvers without grace to the bucket. Each of the 225 pounds of him barely leaves the floor on his 44-percent three-point shot.

When the buzzer sounded and little remained of the Wildcats, McDermott’s stat line didn’t make sense. He never seemed to be in complete control, but 13-of-17 from the field, 9-for-9 from the line added up to 39 points. The senior also grabbed 7 boards.

McDermott eclipsed Larry Bird’s career point total on Sunday. He also made sure everyone knew he wouldn’t have come close had Bird been able to utilize a three-point line.

Much of basketball changed through the years. It adapted and evolved and made things faster, quicker and more airborne. Nothing about Bird’s game resembles that description. In those ways, McDermott is much more like McHale’s old teammate.

The old man purist likely loves McDermott’s game. In his repertoire, there’s a shelf filled with moves we rarely see today. When we see the up-and-under attempt, it’s often sloppy and discombobulated. The technical aspect of the future Naismith winner’s game should be appreciated.

It might not translate to the next level, especially his lack of position in the NBA. On the other side of that coin is the question, “Why should it?” Are we disinclined to appreciate a player’s peak if it occurs at a collegiate level? It seems preposterous. We should enjoy the head scratches after a peek at the box score of the Blue Jays star. We should embrace the quandary of how someone as seemingly ordinary as Doug McDermott can be as unstoppable as anyone in the land.

Creighton plays a wide-open game with relatively little size near the bucket. What the Jays lack in the post, McDermott makes up for with his moves. He’s the undersized older fella at the Y who plays for hours before you realize he never missed a run.

His knee braces throw you off and you think it might be past his bedtime. He knows his moves and he picks his spots. When the elder’s baseline hook banks through the net for the almighty 11, you trace back through the game. It’s a stark realization — foggy on the journey there — when you understand that the geriatric forward finished with nine tallies. Without him, you’d be stuck at 2.

Without McDermott, the Blue Jays would likely be stuck farther away than that. He’s the messiah of Omaha, and he’s got enough to put a team on his back when it matters most. There’s no telling how far Creighton will advance come March. With the guy who’s gone for 26 and 9 per game, it’s hard to count them out at any point.

In a high school gym, the small forward — who stands at 6-foot-1 and really is small — catches the ball on the arc. He takes a step, and then dribbles. Once known as a travel, this is now fair game. Into the lane he pounds the ball with his head down as he wildly jumps away from the hoop. It works sometimes because it’s practiced, and through repetition the ball will fall.

Some time ago in that same gym, a player did the same, but he jab-stepped when he caught the ball. He dribbled with his eyes on the cutter through the lane. A quick jump stop allowed for a plethora of decisions. The ball fell through the net. Repetition triumphed then, too.

When the ball goes to McDermott in the mid-post and he begins to set up the defender, it’s something like a way-back machine stuck in the future. He pivots, he moves, he shoots, he scores. He’s out there in the enormous basketball universe with the tools handed down from generations before.

It seems like fun to take a year in college basketball and travel down memory lane. While the old ways don’t have flash, they work all the same. They work for McDermott, for Creighton and those who know the Naismith Trophy belongs to the coach’s son from Ames, Iowa.

If he lacks anything, it’s glamor.

Then again, no one said the best player in the country needed to be anything different.

Doug McDermott And The Return Of The Big Fundamental