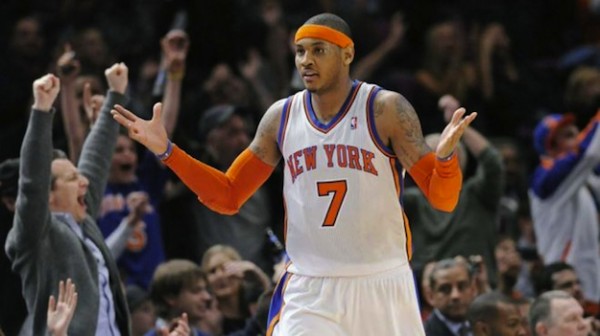 Let me preface this by saying that there isn’t a bigger Carmelo Anthony fan than myself. Melo can score and create as well as any small forward in the history of the game. However, one has to wonder if the Knicks mortgaged too much when they made the trade for Carmelo. At the time, the trade seemed pretty legit to the avid SportsCenter watching fan, but to the real fan, it seemed as if the Knicks mortgaged their future for a superstar to carry them when they needed star power.

As a part of the deal, the Knicks will sent Wilson Chandler, Raymond Felton, Danilo Gallinari, Timofey Mozgov and a 2014 first-round draft pick to the Nuggets, who also got additional picks and cash. Along with Anthony, New York would get Chauncey Billups, Shelden Williams, Anthony Carter and Renaldo Balkman from Denver. The additional picks the Nuggets received were two second-round selections that the Knicks acquired from Golden State when the Warriors signed forward David Lee last summer.

Taking a look back, the Knicks only have Anthony and Balkman left on the roster from that trade. They gave Chauncey away to acquire Tyson Chandler and, in essence, have left themselves without a true point guard to run the offense. At the time of the trade last year, you had to wonder what the logic behind the trade was. Felton was having the season of his life, and Wilson Chandler and Danilo Gallinari were coming into their own as superstars in their own right. Timofey Mozgov was a good center and was starting to play like he was understanding the NBA game, despite being dunked on in a nasty manner by Blake Griffin, but that is another story in itself.

Amar'e Stoudemire is a great pick and roll power forward whose game depends heavily on a point guard who can run the pick and roll and run it well. He cannot play with out the ball and move to space in a normal offense and be productive. He is not going to wow you with the hustle stats, and he is not a physical defensive presence, unless he has to be.

In essence, Carmelo and Amar'e are the same player. Both are ball-stoppers and both have to shoot in volume to get their average numbers. Carmelo is a special player and can be the center piece of any team, but when he is on a team that demands a lot from him as the Knicks now do, he can be as poisonous to his own team as he can his opponents. His style of play will have the rest of the team watching as he is playing. It is not his fault altogether, though; it’s the system.

Take a look at the Lakers. What are they doing now? They are watching Kobe play, the rest of the guys are cleaning up when given the opportunity, and they are losing at a higher rate than ever before. The Knicks are pretty much doing the same. They play together for a quarter or two, and then they go Melo-crazy. When that happens, the rest of the team just watches. He scores and keeps them in it, until that one possession that they melt down.

I am not going to put the blame on one man here, though. The Knicks have more problems than just offensive problems. True, they have ball-stoppers in Melo, Shumpert, and STAT. True, they need a real point guard. However, their biggest problem is defense. If they stopped teams, they would have a pretty good chance of winning. They average over 92 points per game. That is more than enough. However, the opposing teams shoot at a high percentage, because they aren’t just jacking up a bunch of threes like the Knicks. The Knicks shoot threes like they are layups, and it costs them leads and momentum.

Maybe it’s time for them to make a change. Maybe it's time for a new coach or a new philosophy, because they have too much talent to be as mediocre as they are. Either way you look at it, the Carmelo trade was the catalyst for their success last year, but it may have led to the demise of the team’s future. We can’t judge who really won in the trade this early, but for now, it looks like Denver got the edge as they are winning at a higher clip.

17 Replies to “Did The Knicks Give Up Too Much For Carmelo Anthony?”