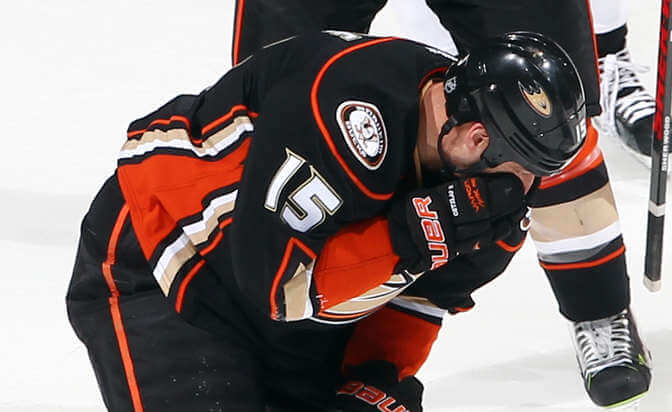 Ryan Getzlaf took a slap shot to the face in game one of the Anaheim Ducks-Dallas Stars series. Getzlaf dropped to the ice briefly and covered his face before skating off to the locker room. He will play in game two because “hockey player”.

That's a term you'll hear a lot over the next few months. Hockey player has come to mean an athlete who will skate through injury no matter how grievous it might appear. Patrice Bergeron played through broken ribs and a punctured lung in last year's Stanley Cup final. His teammate Gregory Campbell finished a shift after breaking his leg blocking a shot. More recently, Rich Peverley asked to go back in a game he had left after he went into cardiac arrest on the bench.

Hockey fans in turn, take these incidents to boost their sports' reputation at the expense of other sports like, say, basketball. This is unfair and wrong. I'm not the first person to say that and I won't be the last.

Now I'm going to say something controversial. Before I do, I'd like to point out that I played hockey for 15 years. I've been a fan longer than that. Okay, controversy. It is easier to play through pain in hockey than other sports. For one, players are protected from head to toe. The skate in particular eases the process of recovery. If a player is nursing an ankle or foot injury, the skate serves almost like a cast. It's rigid enough to keep a wobbly foot stable.

Second, skating is a smooth motion especially compared to running. There is less friction on ice. An athlete's stride goes to the side and back rather than down and back. There is no pounding effect.

Finally, there's the adrenaline. A hockey player plays 40-60 seconds at a time. A basketball player is asked to play ten-twelve minutes at a time, some longer. It's a slower pace, sure. But the quick shifts in action can add to the stress on breaking bodies. They have no protection. There is no such thing as coasting in basketball. If a player has a bum knee or twisted ankle he can't ease the the pain by leaning on a stick.

This goes for hand injuries too. A hockey player can play with a broken wrist or hand or finger because he wears gloves. If he can handle a puck, which is made more difficult with plaster or tape on an arm, he can play. A broken finger is a death sentence in basketball. Not because the player is weak, but because that injury makes dribbling, catching, and most importantly shooting all but impossible.

So when LeBron hobbles to the bench this NBA postseason let's quiet the “hockey player” chatter. This isn't to say hockey players aren't tough- they are and then some- but to suggest that playing through injury is not as heroic as you might believe.

There is of course one exception. A hockey player would never do this.

Manchester United: how did they get into this mess?- The Guardian

The Philadelphia Flyers Are The Captains Now- Grantland

Arnie Review:  The Story of the Life, Golf, and Legend of The King- USGolfTV

Is Kelvin Benjamin the next big thing? -- SB Nation

The Ubiquitous Sonny Vaccaro Is An NCAA Iconoclast - The Shadow League

2 Replies to “Starting Lineups: Debunking The Injury Myth As The NBA And NHL Playoffs Start”