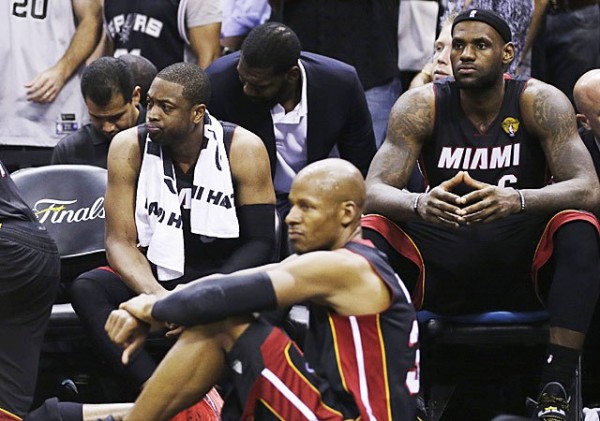 Considering that the NBA Finals have now come and gone, this Dearly Departed entry hits home in a couple ways. One, the San Antonio Spurs were the last team standing. Two, the NBA season has officially come to an end. To me, the latter is more devastating than the fact that the Miami Heat were dethroned as the two-time World Champions. Still, like the past entries in this series, there are thoughts that need be articulated, and it's time to put the Miami Heat season to peace.

When the inevitable "30 for 30" on "The Decision" is finally made, much will be made of this particular era for the Miami Heat. There will still be plenty of bitterness, overexaggerations and a lot of "what if" scenarios presented, but none of that will matter as it relates to LeBron James. For all intents and purposes, he achieved everything that he sought out to do and then some.

Even as this Finals series took a nasty turn for the worse, James put together one of the best individual performances of his playoff career. His contributions will be overshadowed by the loss, but those who know better will applaud him still. No one can accuse LeBron of shying away once the pressure mounted, nor can they say he disappeared in the midst of great odds. Nothing he could have done would have defeated that Spurs' onslaught, yet as the lone survivor on his Miami team, LeBron did as he said he would. He set the tone, he's taking all of the criticism thrown his way and regardless of anything else, he left it all on the court. Whether he stays in Miami or moves on with his career, no one can rationally say he didn't give Miami the very best of himself and then some.

'When the world went to hell, Bosh was the first to fall'

Erik Spoelstra, you are appreciated

There is a constant joke about the Miami Heat that they win games in spite of their coach, not because of him. While it is funny at times, and may appear that way to the casual eye, Spoelstra is a damn good coach. He doesn't get nearly enough credit for what he brings to the table, and some of that was seen in this very series. His defensive rotations were just beautiful when they worked, and while things got out of his control, that's more of a testament to the Spurs than it is him. No, he is not Gregg Popovich and may never receive that comparable honor, but in today's NBA, you'd be hard-pressed to name five coaches better.

Pat Riley stood by this man for a reason, and after four Finals appearances with two rings to show for it, it's OK to admit that maybe he's pretty good at this coaching thing. It might not be as funny as the whole "Miami's players coach themselves" thing that gets tossed around, but the truth hurts. His pace-and-space offense has evolved into its own beast, and in a league where there are only a few coaches that will always be candidates for an open job, Spoelstra can surely add his name to that list. If he were to part ways from Miami tomorrow, he would be highly sought after. In fact, the most impressive thing that he has been able to do is lead a team with not just three first-option superstars, but an entire cast of veterans that were all highly regarded at some point. He's had to get players to not only buy in to his system, but throw their egos to the side in the process. Not bad for a guy that many believed should have been replaced in only his first season with the "Big 3" formation of the Heat.

This might be something that only a Game Of Thrones enthusiast will truly understand, but watching the Miami Heat during the NBA Finals was very similar to that pivotal scene in the television series. It wasn't the fact that Miami could be defeated; it's the way that it occurred that left you feeling lifeless. I'm almost positive that there were fans watching the last three games of this series just like this. The San Antonio Spurs managed to adapt to every adjustment Miami made and wound up slaughtering the Heat in the end. As battle-tested as the Heat were (similar to Rob Stark and soldiers of the North), they were just ill-prepared and overwhelmed when it mattered most. San Antonio picked them apart on their own home court before putting the final sword through back in Texas. It was increasingly unbearable to watch, and truthfully just letting the series end was the only thing left to do.

The end of an era

Honestly, this would have made much more sense had the Spurs lost the Finals. It was the perfect ending for a group of aging veterans and a battle-hardened coach who had been through so much together already. Another loss similar to the one in which Miami beat San Antonio last season could have been the true passing of the torch moment. Instead, this result might signify the end of the modern Heat dynasty as we know it. Say what you want, but four Finals appearances in four years is just something that doesn't happen anymore. They didn't walk away with four rings, but at the end of the day Miami was one of the only two teams still left breathing during this "Big 3" run.

Now, Miami is literally left in a position where they have no choice but to rebuild a depleted roster. Thirteen Heat players will all be free agents this offseason (assuming the Big 3 all opt out), and it doesn't make basketball sense for them to bring back a Shane Battier or even Ray Allen at this point. They'll need youth, but most importantly they'll need vital pieces that can help them win now. LeBron James isn't returning to a team that's uninterested in at least attempting to acquire pieces that can do that. After watching Dwyane Wade look as washed-up as many expected before the season, I strongly believe that he will opt in and hold Miami up for the $20 million or so he has coming to him.

Is the Miami Heat organization above trading Wade if it can receive more reliable pieces? Time will tell. Chris Bosh has been so vital to the success of this team, but the allure of another team that comes calling might take him away as well. Not to mention that in 2014, this "Big 3" isn't what it was. LeBron is still the undisputed best player in the world, but his allies aren't top 10 players anymore. That's just the reality of it. He'll have to make peace with that and do what's best for him for the long term.

2 Replies to “Dearly Departed: 5 Thoughts On The Fall Of The Miami Heat”