NBA players, and athletes in general, are constantly being compared to those who came before them. That's not a slight on the players of today, nor is it a case of putting past greats on an untouchable pedestal. Sometimes it's just really intriguing in seeing how players measure up to their counterparts. It's all speculative fun and even better when the youthful star on the rise can actually compete against his predecessor. If there is anything that can be taken from what's been a lopsided series between San Antonio and Portland, it's watching generations collide.

That's why at the very least, we can appreciate the point guard battle in this series. Damian Lillard is more Tony Parker than he is Chris Paul. That's not an indictment on how good Lillard can actually become, because let's be honest, Tony Parker is among the game's elite. After following up his Rookie of the Year campaign with his first of what will hopefully be many All-Star Game appearances, the Trail Blazers point guard is well on his way. His work ethic coming out of Weber State University continues to propel him forward, and watching his maturation in these playoffs should at the least inspire the city of Portland. That became even more apparent in Portland's 103-92 win over San Antonio.

By all means, if the Spurs had eliminated Portland last night it wouldn't have been a surprise. The veteran team has been having its way, and despite putting up strong performances, Lillard has looked rattled. Tony Parker has been putting the second-year player through a crash course that Lillard has eased his way into accepting with every game. It just so happened that with Portland's season on the line, the PDX star rose to the occasion.

The lack of confidence seen in the early games of the series should also be attributed to the brilliant play of Tony Parker. As point guards go, they're both unique in the sense that neither of them is necessarily a good facilitator. Not in the obvious way of racking up double-digit assists every game, anyway. Parker has made a career out of penetrating the paint and finding players when needed, but it's never been essential to his game. The versatility of his game is often overlooked, because he's not really a pass-first point guard, and he's far from the mold of dynamic guards like Russell Westbrook or Derrick Rose. He's a hybrid at the one that can best be described by watching him.

Parker's strongest asset is his basketball IQ and how he uses that to stay one step ahead of defenders. If that requires him to maintain a pick-and-roll attack, or sacrificing himself to draw contact late in the game, you can rest assured Parker will assess and adapt to every situation. The attention he demands has done more for his surrounding cast than his assists and direct playmaking. That's why this series between him and Lillard has been amazing — because the two share those same qualities. It's just unfortunate for Lillard that he's tasked with the job of having to adapt to the player who has mastered the technique. Parker has countered and exploited everything Lillard, and by extension Portland, has thrown his way. Sure, there are other variables involved in the 3-1 Spurs lead, but that goes with the territory. San Antonio from top to bottom is what Portland is striving to be, and no matter how this series ends, that takes years of dominance. The fun part is watching the road the Blazers take to get there, or more specifically the road Lillard leads them on.

It's just unfortunate for Lillard that he's tasked with the job of having to adapt to the player that's mastered the technique.

With all due respect to LaMarcus Aldridge,  it's #0 that holds the future of this team in his hands. Just as Tim Duncan gracefully transitioned from being the rock of the Spurs to the complimentary piece to Parker, Lillard at just two years in will eventually take the reins himself. His late-game heroics, and willingness to learn on the fly, will be a sight to behold when he does pull it all together.

Game 5 might be the last time we seen the Trail Blazers in these playoffs (though I'm willing to bet on another win in their favor), and Portland has everything to look for. Regardless of what history has proven, at some point San Antonio's reign at the top will eventually (in theory) come to an end. The master of adaptation Tony Parker will lose a step at some point, and the PDX ballers will be there to take San Antonio's place. It's what Lillard is primed for, and something that's going to be amazing to witness as we're all getting a chance to watch it transpire. 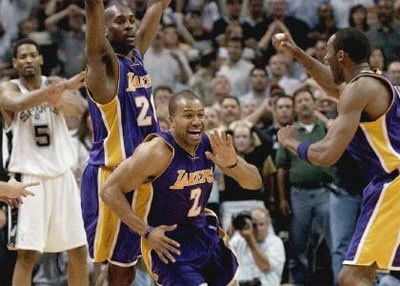 Basketball Kevin Durant, The Oklahoma City Thunder And The Na…
0