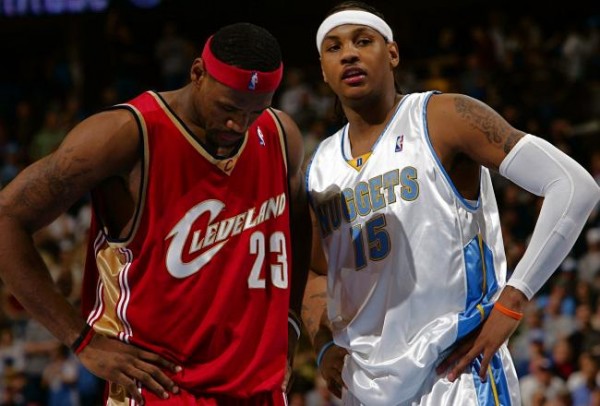 Remember 2003? When a freshman was taking the world by storm as a double-double machine in Syracuse while the entire world was focused on an 18-year-old already built like Thor, taking Ohio hostage? Those were good times, back when the hype had a chance to build on multiple levels, to see who was really the greatest. In other words, the coming of LeBron James and Carmelo Anthony was the biggest story in sports.

It had all the elements of the greatly aligned Magic and Bird rivalry: two young stars that have dominated everything amateur so completely that it looked like pros playing YMCA rec-league ball. When the ping pong balls came to play, there wasn’t a doubt about who would go first. That was already reserved for the precociousness that was LeBron. But it also really didn’t matter either, because Carmelo was going to land somewhere not too far after him and take that squad to the next level all the same.

Things played out like they were supposed to, kind of. LeBron went No. 1, and then Carmelo went No. 3 (let’s not even delve into the whys, what ifs and WTFs of him NOT going No. 2). It was set — let the young-gun rivalry take off. But something off-base happened. Carmelo didn’t bust really, but he also didn’t transcend. He quickly became one of the best scorers, then players, in the league, but it never really has amounted to much, especially when stacked up against LeBron. Like him or hate him, LeBron has done what he was supposed to do. Argue the extent if you’d like, but he’s held up his side of the bargain.

Carmelo stays relevant, but not in the fashion of ever-challenging for the best player in the game, which this rivalry was originally built on. At the risk of ragging on him, how he’s avoided the oh-so-common “overrated” tag is one of the most amazing things in all of sports. He’s a scorer without a scoring title, has topped out on the All-NBA second team (once) and is widely considered a “Top 10 player” without a Finals appearance with nearly 10 years in the game. Averaging nearly 25 points a night for a career is dope, but it sure hasn’t taken him to much more than a lot of popularity passes.

But now, Melo’s got a chance to change that. Both he and Bron are back  eye level with each other in the East, with the most UFC-worthy NBA rivalry in the last 20 years, the Miami Heat-New York Knicks, at their command. Is there still a chance to save this once hallowed personal rivalry-to-be? It’s early, but the Knicks are legit — it’s not too early to call that. They were legit last year, but it just wasn’t time yet. Too many pieces coming and going, and no chemistry at all. That’s working its way out now, and they may very well be the most complete club in the East. But all of that aside, the Heat are at the top of the mountain, and you can’t get knocked off of that before May.

The bottom line is it’s not Magic vs. Bird, and it never will be. But it’s not Kobe vs. LeBron either (because that’s never been). Just 10 years after the point, nobody even stacks Carmelo up versus LeBron anymore. The thrill is gone, but perhaps just temporarily. They won't face each other in an NBA Finals now, but that doesn’t mean that the revival of the Knicks can’t have them be in a Larry Bird vs. Dominque Wilkins style showdown, or even a Michael Jordan vs. Wilkins type of match-up. There’s still something to come of these two head up, and while Melo may never be MVP, scoring champ or anything else, he sure is in a fine position to be thwart to reign of the Heat.

Sometimes, great expectations get derailed by even harsher realities. The great expectation in this case was for the duo to trade off on championship seasons, to meet in the Finals and have epic, throwback, ESPN 2-worthy, NBA Films battles for the ring. But as things usually do, they changed. So in the rivalry revised, it serves as a proving point for LeBron, while a chance to justify what was supposed to be for Carmelo. At either rate, while it will never been what it was supposed to be, it’s not too late for it to be something. Something we haven’t seen in a long time.