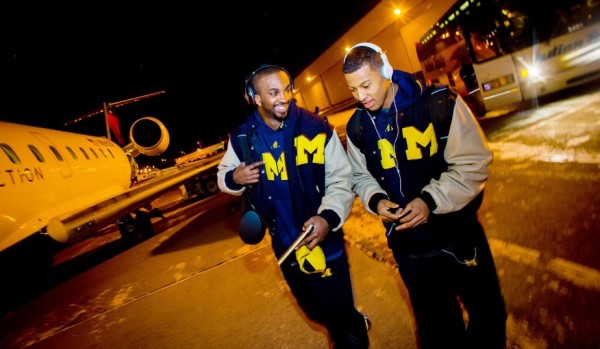 Q: What do you get when you cross a pig with a Michigan Cheerleader?

A: Nothing. There are some things even a pig won’t do.

Anyone who has known me for more than an hour knows that my pro-Ohio State, anti-Michigan credentials are beyond reproach. I have rooted for Ohio State ever since both teams were undefeated and they played a great game in, no, not 2006, I’m talking about 1973! I did my undergrad, dental school and residency program at the school so I’m a proud alumni as well as a loyal fan. Like any properly brought up Buckeye, I was taught to find joy in everything that went wrong with Michigan. The Fab Five lost two straight championships? Wonderful! Football team lost to Appalachian State in one of the most humiliating defeats a division one team ever endured? Hallelujah!

But times and circumstances stand still for no one. Conferences have declared war on each other and the stakes are in the hundreds of millions of dollars. It’s kill or be killed. My position has evolved. When Michigan goes to the Final Four, it’s in the best interest of the other Big Ten schools for them to cut down the nets and bring another title home.

When I was on Twitter Saturday night with my GO BLUE pronouncement, many folks were inquiring as to the status of my mental health. One friend even called to tell me that someone had hacked into my account and was playing a cruel practical joke. Actually, rooting for Michigan Saturday and tonight makes perfect sense. The further you go in the NCAA tournament, the bigger your check. NCAA revenue is shared equally throughout the Big Ten. If Louisville wins, does Ohio State benefit in any way? Nope. You don’t think the Rev’s beloved Penn State could use every penny it can get its hands on to bounce back? From Bloomington to East Lansing to Ann Arbor to Columbus, we proudly proclaimed that we had the best hoop conference. The claim rings hollow if one of us doesn’t take the crown.

If we’re going to get back on competitive ground with the SEC in football, we need to stay competitive in raising revenue. Not only are they kicking our butts on the gridiron, they’re starting to pull away when it comes to overall revenue streams. Every dollar is important. Having the defending National Champion in our conference will certainly help ratings and entice ESPN to give Big Ten games the best prime time slots. This helps recruiting as well. Basketball dollars will help football. It all goes in the same pot.

President John Kennedy famously stated, “a rising tide lifts all boats”. Ohio State benefits from having rivals that everyone respects. When Ohio State and Michigan were ranked 1-2 in 2006 and the Buckeyes pulled out a thrilling 42-39 victory, it was historic. When Michigan showed up in 2009 with a 3-8 record and we beat them 42-7, it was dull beyond belief.

Think of Ohio State and Michigan as Hillary and Barack from 2008. They tried their best to tear each other limb from limb. But when it was over, they didn’t want to see another party (conference) take the White House (championship). Now do you get it?

So, I’m calling on all Big Ten fans to root for your conference brother to deny Pitino the chance to become the first coach to win titles with different schools. It will be that much sweeter to put the wood to the Wolverines next year when they’re defending National Champs.

The same applies for other conferences as well. Texas fans need to stop laughing at Hook and Ladders and marriage proposals and cheer for the Sooners. When UNC is eliminated, Carolina fans should to take a couple of Advil and cheer for Duke. It’s a new day. Survival of the fittest can be ignored no longer.

5 Replies to “Can A Conference Brotherhood Trump A Bloody Rivalry?”