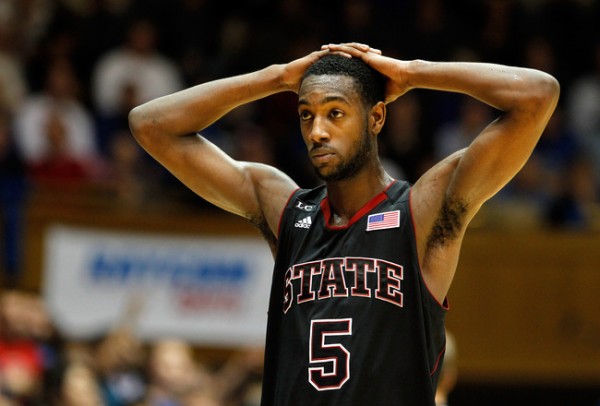 Sometimes, staying in place can do wonders for your confidence. After having the opportunity to bounce to the NBA after his debut season, C.J. Leslie made the right choice by returning to the Wolfpack and honing his skills for another year.

I first noted his improvement this summer at the NC Pro-Am, especially in terms of his outside jump shot. C.J. has always been known as a freak athlete with a deadly first step. Adding a jumper only makes him tougher to defend. I think it’s safe to say that Leslie’s defensive skills are far superior to his offensive game at this stage in his career.

I have had the benefit of watching Leslie play as a high school star at Word of God High School, as he played next to John Wall. His defensive prowess and ability to finish on the break are what had people drooling over his game. Since entering college, some of those people that were on the Leslie bandwagon have jumped ship, but now it appears that they are looking to jump back on, as he is getting better in every phase of his game.

The resurgence started this past summer when the Holly Springs, NC native more than held his own against some top competition in the NC Pro-Am. In his best performance of the summer, C.J. was matched up with Celtics big man Chris Wilcox and definitely got the best of him. The 20-year-old’s first step was too much for the nine-year NBA vet and gave fans a dose of reality in terms of how quick and athletic he truly is.

His first step will be a problem for most defenders, but don’t get it twisted: Leslie is still very rough around the edges and has a ton of work to do (especially in terms of ball handling, strength, and decision making), but he has NBA lottery potential written all over him.

Watching him play against Duke on Thursday reminded me of how why so many people fell in love with his game. He has an upside that is almost immeasurable, but it all depends on how much he wants to work to add to his game. Make no mistake about it though; N.C.State is only as good as Leslie performs. When he plays at a high level, they can beat just about anyone.

C.J. has shown great strides, and once he gets the strength factor down, I can see All-Star potential all over him. The good thing for him right now is that the ACC is loaded with talent at his position.  All he has to do is be dominant game-in-and-game-out, and everyone will notice what he is capable of. If Leslie can continue to dominate the talent that he will be facing this season, you can take this to the bank: Leslie will be an NBA lottery pick.

4 Replies to “C.J. Leslie Is Finally Becoming What We Thought He Would Be”