In the summer of 2007 the Boston Celtics completed a blockbuster trade for Kevin Garnett, adding him to a starting five that already boasted Ray Allen, acquired earlier that summer, and Paul Pierce, the team’s long suffering All-Star draftee.

With that transaction, after years of fawning over the two-star method (i. e. Jordan and Pippen, Shaq and Kobe), the modern day Big Three was born. For Boston, it was supposed to be the second iteration of a promise for championship glory. At least that was the way sports media assessed the matter at the time.

But the man who had a hand in orchestrating the deal for the Cs wasn’t so quick to anoint the new construct. Having won a title as a teammate of Robert Parrish, Kevin McHale and Larry Bird, Danny Ainge didn’t bite his tongue when offering his thoughts on what it meant for Garnett, Allen and Pierce to follow in their footsteps.

“These guys will never be the Big Three until they win a championship.” — Danny Ainge, August 2007

As we now know, the talking heads got it right. The Celtics finished what they started that summer by winning a trophy in the team’s first season with Allen, Pierce and Garnett as teammates in Boston.

Despite the immediate success of the Celtics’ “Big Three,” Ainge wasn’t wrong in his restraint — after all, this is NBA basketball we’re talking about. A team is, at any moment, only an injury or a bad attitude away from a losing season.

In fact when it comes to our presumptions of success every time that three all-stars are thrown together on a roster in the name of winning it all, we would all be better served to take his cue.

In the years since Boston’s glory-restoring trio made us rethink what it takes to win a championship, teams have tried and tried again to replicate the Big Three formula. The results have largely been unremarkable.

The reality is that Ainge’s creation taught us more about how difficult it is to win a championship with three ridiculously talented players on your team than we have been willing to admit or accept.

Even as we wait to see if having LeBron James as one of those ridiculously talented players guarantees a 100 percent success rate, it’s time we reflect on the formula’s fragility and the lessons we’ve learned in its failures.

Point guard or no point guard, that is the question

After careful consideration, it is probably best if a team’s Big Three doesn’t include a point guard.

I’ll go ahead and state the obvious. The fact that Rondo couldn’t shoot was a huge benefit to the offensive flow for Boston’s triple threat back then. The Big Three didn’t have to worry about him coming down court and pulling up before letting the offense develop. Rondo was, however, a threat to drive the lane ,which meant guys would be open as defenses collapsed on him. It was a match made in heaven, especially since none of those guys were ball hogs.

Mario Chalmers was a non-factor at the point guard position, and the Heat struggled early on as Wade and James sorted out the primary ball-handling responsibilities. Also complicating the matter was both Wade and James’ propensity to grab a rebound and go coast-to-coast. But eventually they figured out how to run an effective offense, and James got his coveted championship rings in Miami.

Currently in Cleveland, we’re seeing the worst of both worlds. They have a young, hungry point guard in Irving who isn’t the team’s unsung hero, but is a card-carrying member of the Big Three who wants the ball in his hands. They have James who dominates the ball and, as the best player on the planet, has routinely been gifted the ball-handling responsibilities for the team. Both men are initiators and finishers off the fast break, too. It’s dysfunctional, and for Kevin Love, possibly a bit more frustrating than Chris Bosh predicted.

James is a talented and unselfish passer, but he mostly makes the pass after the defense finds him. Teams run two guys at him and, he passes to a newly open teammate, who may or may not be in the best position to score. A true, quintessential point guard makes the pass because he’s trying to run the offense effectively and get guys involved. That is, of course, unless that quintessential point guard is irritated with having to play second fiddle to the prodigal, superstar son and takes every opportunity to get his points when he can.

There’s no way to rewrite history, but I’d be curious to see what the Cavs might have looked like without James. My guess is that Irving and Love would have made a formidable tandem if GMs still believed in formidable tandems.

The sacrifices of a champion

We heard a lot about sacrifice when that Celtics deal got done in 2007, mostly in the way of numbers. Many wondered aloud about how reluctant Garnett, Allen and Pierce would be to give up their stat lines. Each of them previously had been the best players on bad teams, so it was hard to predict whether those guys would be willing to sacrifice touches and nightly double-doubles for a winning record. It turns out that they were, and unfortunately their selflessness led to our very limited understanding of the type of sacrifices required to make this type of engine go. 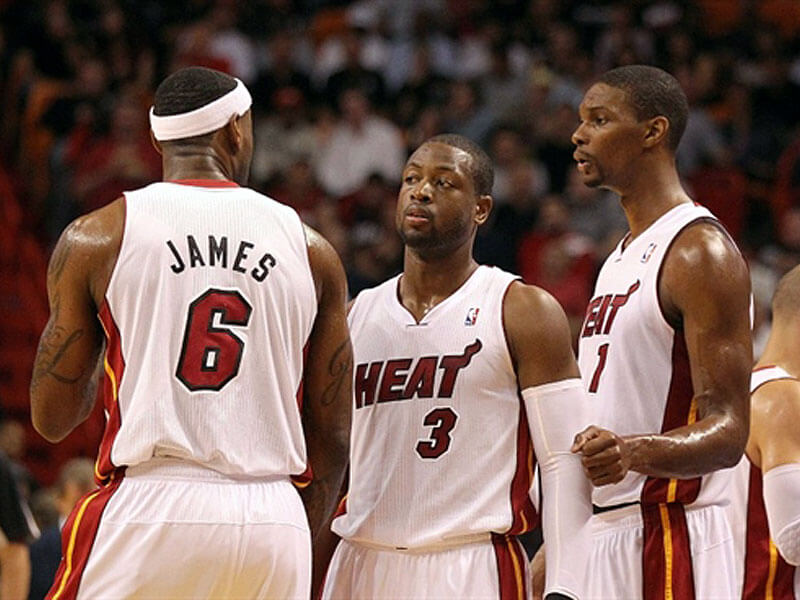 Miami’s version taught us, in its treatment of Bosh, that the sacrifices can sometimes extend to reputation. Before taking his talents to South Beach, Chris Bosh was an undisputed beast. Once there, however, it didn’t take long for us to forget that. Eventually his presence felt more third wheel than third offensive threat. He wasn’t being equated to Mario Chalmers, but he wasn’t exactly being viewed at the same level as James and Wade either. From a fan perspective, Bosh became a bit of a joke. On social media he was often labeled soft for his emotional displays in defeat, and he was the subject of some unkind hashtags and memes.

That was a hard hit to take in the prime of his career, and for a different player on a different team it might have all been too much to overcome. Bosh handled it elegantly though, and right or wrong, he set a standard by which Love is already being judged.

Back in 2012 when Kobe Bryant was part of the contingent hoping to lure Dwight Howard to Los Angeles, there was a rumor about a recruitment call gone bad, and Bryant subsequently denied those claims. But there was no denying the in-your-face tone of his pitch to Howard the following year, as he tried to get the free agent and three-time defensive player of the year to sign a long-term deal with the Lakers following a 45–37 campaign.

“You need to learn how it’s done and, I can teach you here,” Bryant reportedly said during the Lakers presentation in 2013.

The “it” here is a championship of course.

Injuries were a huge factor in the derailment of the Lakers’ title hopes, but Howard recently indicated that the prospect of having to play alongside Bryant again was the driving force behind why he told the Lakers no the second time around. One has to wonder how Kobe’s ring-fueled snobbishness played out in the locker room.

It wouldn’t have been an easy pill to swallow, especially coming from a peer. These guys instead came together to do something neither of them had done before — they each had suffered separately through years of coming up short — and ultimately their humility helped unite them in their cause.

Dwayne Wade’s humility was a key cog in the Heat’s championship run. His warm welcome of James and Bosh to his team sent a message that was the very opposite of Kobe’s. It offered simply, I need your help to win. 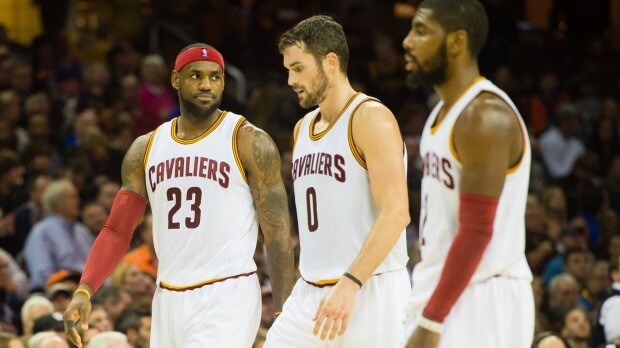 It’s not entirely obvious which message James has for his new teammates in Cleveland, though some might argue that his tendency to act as an assistant coach on the sideline and an assistant GM in front office personnel decisions indicates that he’s going the Mamba route. A rumored dust-up between James and Irving earlier in the season, which both players deny was an actual thing, briefly painted a picture of some Howard-like resentment to come.

James will need to choose wisely as his future championships hang in the balance.

However things shake out in Cleveland, it’s past time we let go of our romanticized fascination with the idea of the Big Three. If you’re still not convinced, let me also remind you of the disasters that were Brooklyn (Deron Williams, Joe Johnson and Brooke Lopez) and New York’s (Carmelo Anthony, Amare Stoudemire and Tyson Chandler) versions of the same imagined perfect trio.

There have been fewer hits than misses. It’s time we all face that fact and move on.

by Rosalyn R. Ross time to read: 5 min
Basketball Do Not Cross Russell Westbrook
Basketball Restoring Order In The East? LeBron And The Cavali…
3