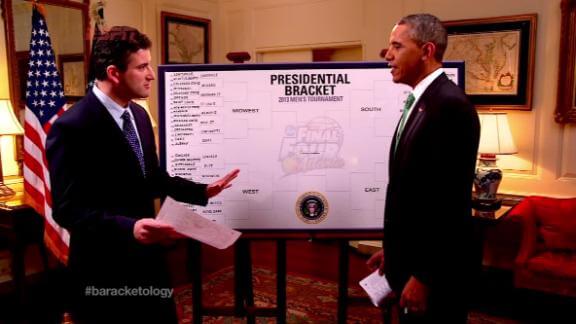 There’s no shortage of cool things about the POTUS. But one of the coolest things President Barack Obama has done annually throughout his tenure in the nation’s highest office is his annual feature on ESPN where he picks his NCAA brackets with Andy Katz.

The series, known as “Baracketology,” is far from just a fluff piece highlighting him as a basketball fan. Instead, the Prez actually can pick them with the best of them, as he has correctly chosen three national champs during his tenure. Actually, he’s coming off of a championship pick with Louisville last year and has the Cardinals back in his Final Four this year. This year's Final Four stands a pretty good chance of keeping him atop the picks polls as well, with him taking Florida, Michigan State, Arizona and Louisville to get to Dallas for the Big Dance.

The human touch is always great to see from our leaders, and it is what keeps them relatable and legit. This slice into his life as both the president and sports fan is about as legit is it gets.

You can watch ESPN's segment with Brother President and Andy Katz (produced by TSFJ's friend of the family Celia Kelly!) right over here.

Here is what else is going on around the world of sports and otherwise:

Bo Jackson to Russell Wilson: Stick To One Sport—ProFootballTalk

Motte Serious About Striking Out Cancer—MLB.com

The Stone Cold Steve Austin Show: The Big Show—Podcast One

Eminem, Skrillex and Kings of Leon to lead Lollapalooza This Year—Rolling Stone

The Gorgeous History Of Tattoos, From 1900 To Present—Huffington Post